At time t=0, a mass m0 of gas is ejected with velocity v0 and total kinetic energy E0.

This interacts with surrounding interstellar material (ISM) with density ρ0 and low T.

The shell velocity much higher than the sound speed in ISM, so a shock front of radius R forms.

The ejecta from the supernova explosion interact with the surrounding ISM

The shell of swept-up material in front of shock does not represent a significant increase in mass of the system.
The ISM mass previously within the swept-up sphere of radius R is still small compared to the ejecta mass:

The dynamics can be described by location of shock front versus time.

Without discussing all the details of the Sedov soulution let’s just look for a self-similar solution, in which the dynamics can be reduced to one variable = Rtl.

Note that dynamics are determined by initial energy of explosion, E, and the density of ISM, ρ0.

Therefore, (E/ρ0)(t2/R5) is a dimensionless quantity which describes the dynamics of the expansion.

This solution describes the expansion of SNR pretty well.

where ρ is density, P is pressure, γ is the adiabatic index.

Introduce the Mach number M = v0/c0 where c0 = sqrt(γP0/ρ0) is the sound speed upstream, and find in the limit of large M.

Get large increase in temperature for large M. 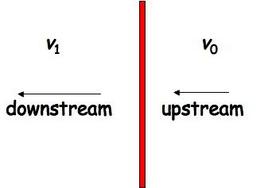 The shock discontinuity in reference frame where shock is stationary, v0 = shock speed

In Sedov solution, find for downstream material:
pressure = (3/4) ρ0v2
temperature = (3m/16k) v2 where m is the mean mass per particle downstream (including electrons) and k is Boltzmann’s constant.

The precursor to this supernova is thought to have been 25 times the mass of our Sun.

Stellar material is moving out at velocities of about 2,000 km/s, creating shock fronts.

Gas is heated by shock to X-ray emitting temperatures.

Although gas glows in X-rays, the loss of energy due to radiation is relatively unimportant to the dynamics of the expansion, i.e. cooling time is longer than age of SNR. 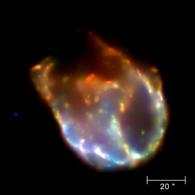 The SNR N132D in the Large Magellanic Cloud

Eventually, the shock slows down. We can define the end of adiabatic phase as when half of energy has been radiated away.

Typically, at this stage the shock speed is about 200 km/s (with dependence on initial energy and ISM density).

Without the high temperature behind the shock, there is no high pressure to drive it forward through the ISM. The shock front is now `coasting’ with constant radial momentum, ie. All the material in the shell moves outwards with total momentum given by the equation shown.

Most of the swept-up material is compressed into a dense, relatively cool shell (a temperature of approx. 104 K).

There is some X-ray emission from the residual gas in the interior, but this is much weaker than before.

When shock velocity drop to ~20 km/s, the expansion becomes subsonic and the SNR merges with the ISM.

However, this is an oversimplification since the ISM has magnetic fields and may present inhomogeneities. Moreover, the pressure of cosmic rays must be taken into account. Both of these factors affect the expansion of the SNR.

The magnetic field may help the coupling of the ejected matter with the ISM so that a shock wave can develop. Inhomogeneities of the ISM are also important, since the shock velocity and radiation intensity are both a function of density; as the shock enters a dense cloud, the velocity decreases and the radiation increases.