The Course will be divided into 3 parts:

What is High Energy Astrophysics

High Energy Astrophysics is the branch of Astrophysics which studies the most energetic phenomena of the Universe, through the study of electromagnetic (EM) radiation and particles that they produce.
This field is closely connected to many branches of Physics and Astrophysics, going from the study of Cosmic Rays, to the detection and analysis of EM radiation in the far-UV, X and γ-ray bands.
This Class will focus mainly on the phenomena observable through their X and γ-ray emission, on the physical processes producing such radiation and on the astronomical sources where it originates. Other aspects of this field, such as the study of Cosmic Rays, are discussed in other specific Courses.

High Energy Astrophysics probe many physical processes in extreme conditions which are not easily accessible in Laboratories:

Furthermore high energy photons reveal many aspects of astronomical sources which are often complementary to other wavelengths and sometimes unique to the X and γ ray bands, e.g.:

The Earth atmosphere is not transparent at wavelengths shorter than a few microns (see Figure).

For such reason High-Energy astrophysics developed quite late compared to traditional Astronomy. The discovery of high-energy radiation from the sky had to wait the availability of rockets and satellites, which could bring detectors above the atmosphere.

Historically X and γ rays were distinguished based on their wavelength, choosing a somewhat arbitrary separation around ~10-11 m. Today this criteria has changed due to the wavelength overlap in the emission produced by phenomena traditionally classified as X or γ ray emitters. 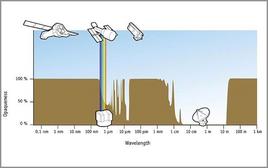 Atmospheric absorption as a function of wavelenght.

Before 1960 several experiments were conducted by the US Naval Laboratories to detect X-rays from the Sun, but were unsuccessful in detecting extrasolar high-energy emission.

The group of Riccardo Giacconi (who had been trained as a particle physicist) in the ‘60 conducted the first rocket experiments to measure extrasolar X-ray emission (see Figure).

The discovery of the first cosmic X-ray source in 1962 came as a surprise. This source is called Scorpius X-1, the first X-ray source found in the constellation Scorpius. Based on discoveries in this new field, Riccardo Giacconi received the Nobel Prize in Physics in 2002. It was found that the X-ray emission of Sco X-1 was 10,000 times greater than its optical emission.

This discovery required a source of energy greater than nuclear fusion, which powers stars. This source is now known to be gravity, due to the infall of hot plasma onto a compact object (neutron star or a black hole).

An historical review on the dawn of X-ray Astronomy can be found in the Giacconi’s Nobel Lecture.

For such reason the detection and analysis of X and γ has many similarities with particle physics.

There are advantages and disadvantages with respect to traditional optical Astronomy:

Traditionally High Energy Astronomers use non-standard measurement units, often referring both to energy and wavelength in terms of electronvolts. Typical conversion factors are shown in the Table on the right.

This image shows the Sun as viewed by the Soft X-Ray Telescope (SXT) onboard the orbiting Yohkoh satellite.

The bright, loop-like structures are hot (millions of degrees) plasma (electrically charged gas) confined by magnetic fields rooted in the solar interior. An image of the sun in visible light would show sunspots at the feet of many of these loops.

The halo of gas extending well beyond the sun is called the corona. The darker regions at the North and South poles of the Sun are coronal holes, where the magnetic field lines are open to space and allow particles to escape. 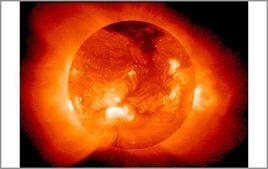 The Sun as viewed by the Soft X-Ray Telescope (SXT) onboard the orbiting Yohkoh satellite. - Courtesy of NASA.

Tycho’s Supernova Remnant, which exploded in 1572.

All x-rays images must use processed colours since x-rays (as are radio waves, infra-red) are invisible to the human eye. But they are not invisible to suitable equipment, such as x-ray telescopes. The red and green bands highlight the expanding cloud of plasma with temperatures in the millions of degrees. 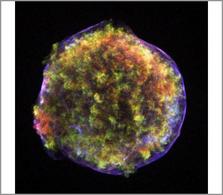 Tycho's Supernova Remnant, which exploded in 1572. - Courtesy of NASA. 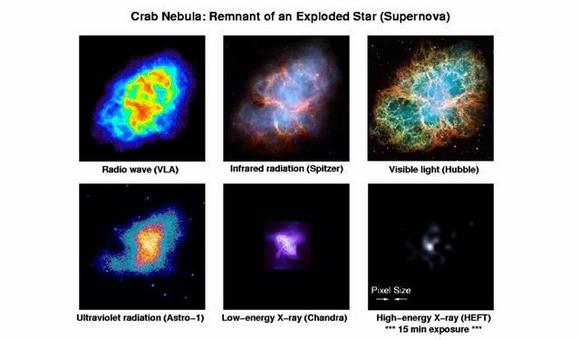 The Crab Nebula is a remnant of an exploded star. This is the Crab Nebula in various energy bands, including a hard X-ray image from the HEFT data taken during its 2005 observation run. In the center of the Nebula lies a fast spinning neutron star: a pulsar. - Courtesy of NASA.

Galaxies emit in X-rays due to the contribution of hot gas, supernova remnants, binary accreting systems and supermassive Black Holes at their center. This image shows the optical(left), UV (center) and X-ray (right) view of a Spiral galaxy. The small circle marks the position of Supernova Ia 2005ke. Courtesy of NASA.

Clusters of galaxies emit in the X-ray band due to the hot plasma trapped into their deep potential wall.

This is a false-colour x-ray image of the so-called ‘Bullet cluster’, produced by the fast encounter of two massive clusters.

The bow-shock clearly seen in the right component reveals the collisional nature of the emitting plasma. 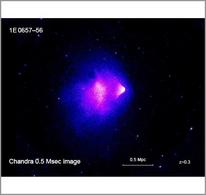 Calculate the virial temperature for:

Use textbooks and the web to obtain the typical sizes of these sources.

These notes include several contributions from public online material, including (but not limited to):