X-rays represent a tiny fraction of the energy output of galaxies.

So why do we want to study them?
Let’s see where the emission comes from… 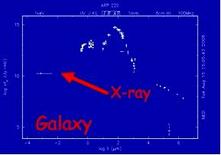 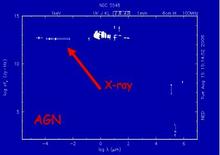 The optical classification of galaxies

Galaxies are historically classified based on their aspect at optical wavelengths. The most famous of these classification schemes is the Hubble diagram (figure on the right). 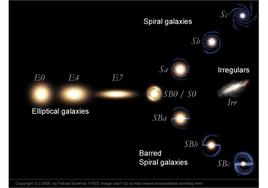 In normal galaxies, e.g. those which are not dominated by an active nucleus (see next lectures), the high-energy component is due to the integrated emission of several different processes which were discussed in previous lectures:

As discussed in a previous lecture, accretion of material from primary to compact secondary (black hole or neutron star): infalling material heats up to ~106 K giving off X-rays.

Low-mass X-ray binaries: primary mass similar or lower to that of the Sun, slow evolution.

Major contributor to integrated X-ray emission of our Galaxy (~50%). 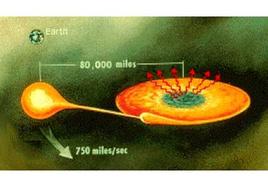 A schematic viw of a Low Mass X-ray binary system.

As discussed earlier, explosion in Supernovae produces shock wave that accelerates electrons and heats up material.

X-rays due to thermal, synchrotron and bremsstrahlung radiation.

However, small contribution to total X-ray emission of Galaxy (<1-2%).

Sequence of the Supernova explosion. 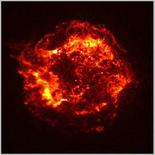 Like the Sun, most stars have atmosphere of hot plasma (T~106K): thermal X-ray emission.

An exception is represented by pre-main sequence stars, as discussed in an earlier lecture, but those dominate only in strong starburst galaxies. 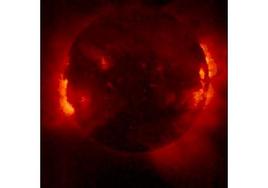 The solar corona in X-rays. 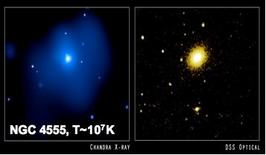 X-ray halo (left) compared with the optical image (right) of a the elliptical galaxy NGC 4555. 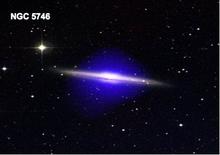 The presence of multiple X-ray components in galaxies was predicted comparing the expectations from different emission models.

While Late-types are well explained by the integrated emission of discrete sources (binaries and SNR) Early-type galaxies have an additional component that is represented by the emission of the hot interstellar medium. 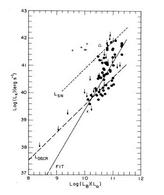 Optical vs X-ray luminosity of Early-type galaxies. Also shown is the predicted emission due to discrete sources (LDSCR) and to Supernova winds (LSN).

Why study the X-ray emission….

Enrichment of the Interstellar Medium

The Antennae galaxies represent one of the best examples of gas enrichment during a major merger, as a consequence of vigorous star formation.

The image at the lower right is processed and color-coded to show regions rich in iron (red), magnesium (green) and silicon (blue). These are the types of elements that form the ultimate building blocks for habitable planets. 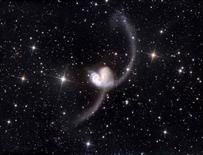 The interacting system of thde Antennae galaxies at optical.

Enrichment of the Interstellar Medium

Intense star formation can produce superwinds that blow the interstellar medium out of the galaxy and enrich the intergalactic medium: 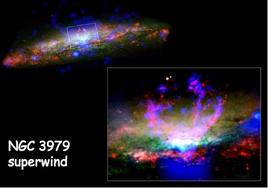 Formation of halos in Elliptical galaxies 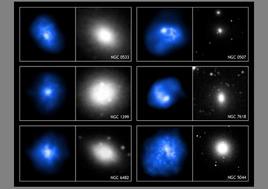 Late type system are dominated by large number of X-ray binaries (in addition to some hot gas) which allow to study the formation & evolution of these systems and, as they are linked to star formation, of the whole galaxy. 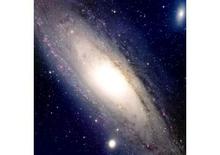 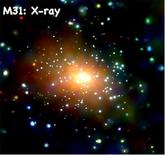 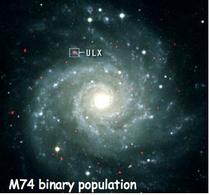 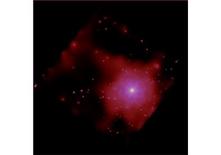 X-ray image of NGC 4649: both the diffuse gas and the pointlike bynary population are clearly visible. 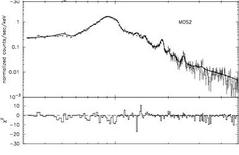 X-ray spectrum of NGC 4649, due to the superposition of the different components on the left. 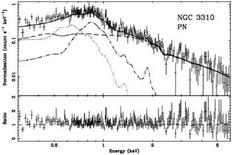 XMM X-ray spectrum of NGC3310. The dotted, dot-dashed and dashed lines show the different components discussed on the left. 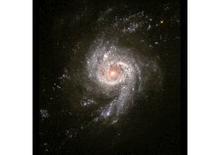 X-ray emission can be used as a census of the star-formation rate (SFR) in late type galaxies. 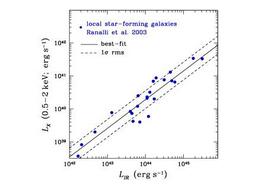 Correlation between X-ray and IR luminosity in spiral galaxies.

The X-ray binary luminosity function (i.e. number of sources with luminosity LX) for galaxies with SFRs in the range ~0.1-50 MΘyr-1 can vary considerably from galaxy to galaxy.
However if we rescale by the SFR of the galaxy, the different XLF agree quite well: the number of binaries is proportional to the SFR.
N(LX>2×1038)=2.9xSFR[MΘyr-1]
In conclusion the X-ray luminosity can be used to trace star formation. 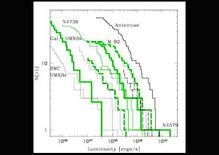 X-ray luminosity functions for a sample of starforming galaxies. 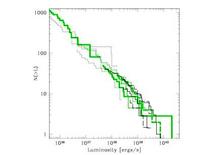 X-ray luminosity functions normalized to the star formation rate of each galaxy.

The galaxy contribution to the X-ray background 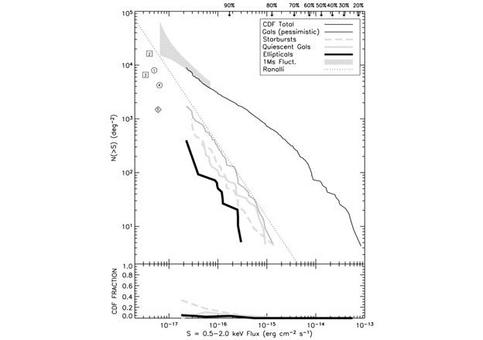 AGN and galaxy number counts. At the faintest fluxes galaxies are expected to dominate the X-ray background. However current instruments do not allow to resolve these sources individually.