Isophotes of ETGs are reasonably fit by ellipses. Assume for now that, within the same galaxy, these ellipses are similar (same axis ratio,

), homocentric (same position angle, P.A., between the major axis and the direction of the North, counted Eastwards), and coaxial. In absence of internal extinction, this isophotal pattern is the projection of a 3D light distribution where the surfaces of equal light density are similar, homocentric, and coaxial spheroids (cfr. G. Galletta, Ap.Sp.Sc., 92, 335, 1983; B.S. Ryden, MNRAS, 253, 742, 1991). 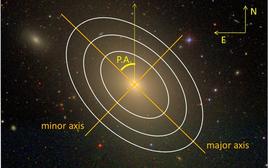 Similar, homocentric, and coaxial isophotes superimposed to the color image of NGC 4365.

Spheroids are figures obtained by rotating an ellipse about one main axis:

, the spheroid is oblate (sort of flattened sphere), if

it is prolate (cigar like). These two shapes [not distinguishable in the projected image. Why?] are remarkably different! In the oblate figure the symmetry axis coincides with that of the highest moment of inertia [if light density is proportional to mass density, though!].

For a prolate figure it is just the opposite. In general, for a homogeneous (

, the moments of inertia are: 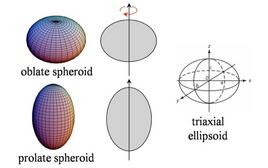 With this in mind, let’s calculate the relation between the intrinsic flattening

(between the line of sight and the symmetry axis

axis (normal to the plane of the figure) to coincide with the line of nodes, the apparent ellipse has an axis of length

, and another of length 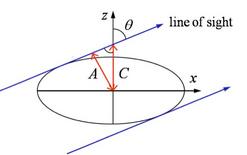 Cross section of a spheroid with a plane containing the symmetry axis z and the line of sight. 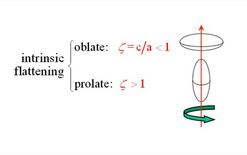 Projection of a spheroid

Since the projected figure is an ellipse, whatever it is the original spheroid, we will always measure an apparent axial ratio

of the line of sight:

tangent to the ellipse in

By squaring and substituting: 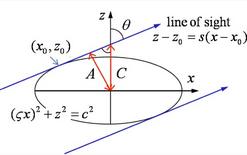 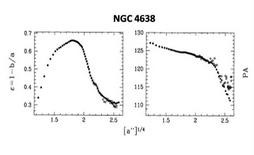 Projection of a spheroid

Since the intercept of the line of sight with the

, from the figure it is:

or, using the ratio 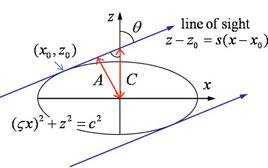 we obtain the relation between the apparent flattening

of the ellipse into which a spheroid of the intrinsic flattening

The above formulae, derived as early as 1926 by Hubble, apply to spheroids with negligible internal extinction.

Distribution of the apparent flattening

Let us now ask the following question: what will it be the normalized distribution (probability function)

of the apparent flattening

, if their symmetry axes are randomly oriented in space?

[principal value] that the symmetry axis forms with a fixed direction

From the figure it is apparent that the number of the

galaxies with intrinsic flattening between

which assume an inclination between

[note the normalization to half of the sphere due to the fact that the symmetry axes are not oriented]. 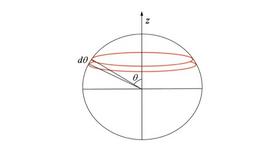 We have seen that, if

. Thus, the probability that a galaxy with an intrinsic flattening

appears with a flattening

The total number of galaxies with apparent flattening between

Solving this integral equation yields to the distribution of intrinsic flattening. 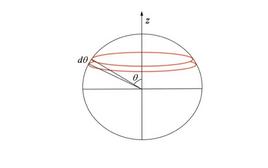 Statistics of flattening for spheroids

for the oblate case,

for the prolate case,it is:

Statistics of flattening for spheroids

You must pay attention, in the prolate case, that the measured flattening

irrespective of the intrinsic shape of the spheroid [the projected ellipse is always "flat"?], enters in the formula as

in view of the a priori knowledge of the shape of the spheroid.

Let us now see how to use this result.

In 1970 Sandage et a. (Ap.J., 160, 831) solved the oblate case integral equation above for samples of Shapley-Ames galaxies grouped in the three families of ellipticals, S0s, and spirals. The inputs were the normalized histograms of the average flattening, relative frequencies of the mean

. The equation was either inverted [see the original paper for the technique] or solved forcing

to be Gaussian. The outcomes are in the next figure. 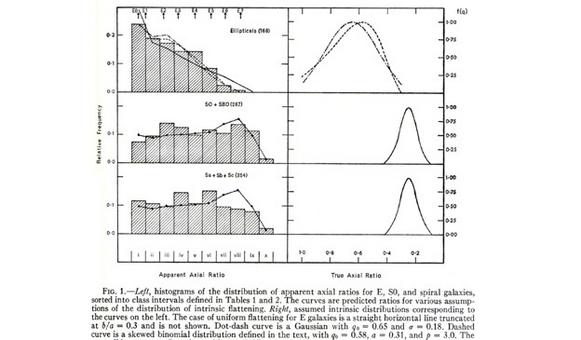 In 1981, Binney and de Vaucouleurs (MNRAS, 194, 679) repeated the analysis using 1750 galaxies from the Second Reference Catalogue of Bright Galaxies (all with a diameter

), grouped in 9 morphological bins (E to Im). For ellipticals they considered also the prolate case and presented the formalism for the triaxial case. It is found that the modal true axial ratio for Es is 0.62 (Hubble type E4) irrespective of whether ellipticals are oblate or prolate.

There are problems in fitting S0 with axisymmetric flat bulges.

Flattening of spirals increases with the Hubble type from Sa to Sc. 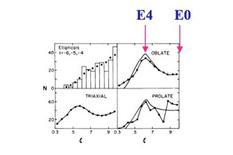 The true flattening distribution for E galaxies according to Binney and de Vaucouleurs (MNRAS, 194, 679, 1981). 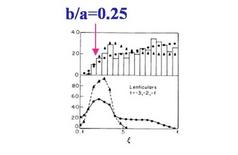 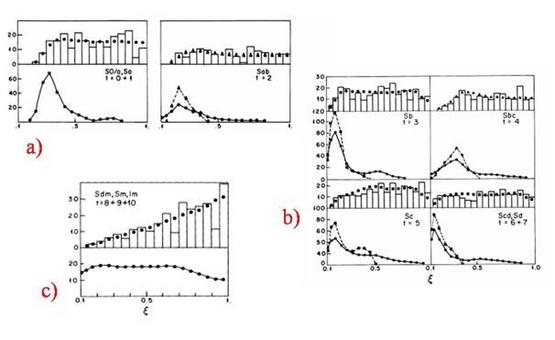 True flattening distributions for early spirals (a), intermediate and late (b), and very late (c) according to Binney and de Vaucouleurs (MNRAS, 194, 679, 1981). Note how flattening increases along the Hubble sequence.

Actually, even for elliptical galaxies, the assumption that they are simple homocentric coaxial spheroids does not work. Observations prove that:

1. isophotes have properties which may depend on color;

may vary with the distance

from the galaxy center – flattening profile

3. their orientation may vary with

, i.e. the position angle of their major axis is not constant – orientation profile

4. their centers may not coincide (off-centering of the isophotes).

How do you prove this? By fitting isophotes with ellipses. 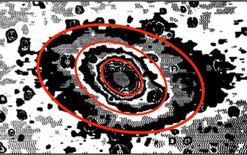 Old fashion isophotes of NGC 1600. Note the change with radius of the position angles of the fitting (by hand) ellipses. 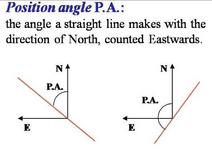 One way is to fit the general expression for a conic, the quadratic curve:

to the set of N points

sampling the isophote by minimizing the sum of the algebraic distances:

[This is a good time to recall the Least Squares Method and the orthogonal polynomials.]

is elementarily derived from a digital image by searching for the pairs of adjacent pixels whose brightness clips the brightness value chosen for the isophote.

[why 5?] are related to the ellipse parameters:

, and the coordinates of the center

, by the following relations [derive them by translation and rotation of the canonical equation of an ellipse]:

provided by the Least Square fitting algorithm.
It is a safe practice to run the algorithm twice, using the first set of parameters to translate and rotate the isophotal coordinates.