the energy per unit wavelength coming from a source S and crossing the unit area perpendicularly (outside the atmosphere) in the time unit. It does not matter how extended the source is, provided your photometer sees it all, and how far it is. According to a formula due to the American astronomer Robert Norman Pogsom, who used the notion that the eye is a logarithmic detector [expand the concept], the quantity:

is the apparent magnitude of S at

is the zero point constant (arbitrarily fixed in any photometric system; see examples later). The same concept applies to a finite band centered at

and characterized by the transfer function

The magnitude is called bolometric if all photons (of any frequency) are transmitted and recorded. Observed apparent magnitudes are affected by various sources of systematic errors, most of which tend to make them fainter.

is the distance of the source S, measured in parsec, then:

being the flux at the standard distance of 10 pc and

is the apparent magnitude as observed, i.e. not yet corrected for reddening and for the other causes of dimming, then the quantity:

it is clear that (at least for this cause of dimming) the apparent distance modulus tends to the true value as the observing band moves redwards. As a rule of the thumb, remember that a distance of 1 Mpc is equivalent to a true distance modulus of 25 mag, and that the increase of one order of magnitude in D implies a 5 magnitude fainter distance modulus.

is the blue minus visual color index, where B and V are two bands of the Morgan-Johnson photometric system [see later]. Apart from absorption and other effects on the apparent magnitudes, colors are distance independent [think about]. If S is extended, one may consider only the flux

from a unit angular element (a unit solid angle) and define the “surface brightness” accordingly:

is distance independent [be sure that you understand why and which are the assumptions needed to make the statement true. Hints: extinction and non uniformity of S]. Obviously the integration over all the area of S turns the surface brightness into a distance dependent total magnitude:

Measurements of magnitude and surface brightness may by attenuated by extinction (atmospheric and interstellar) and altered by radial velocities (K-term) [see later], but only magnitudes are affected by distance. We shall see these various effects in the followings. We shall also remember, in comparing objects at different distances, that they will be at different cosmic time, and thus at a different evolutionary stage.

A sample of photometric systems 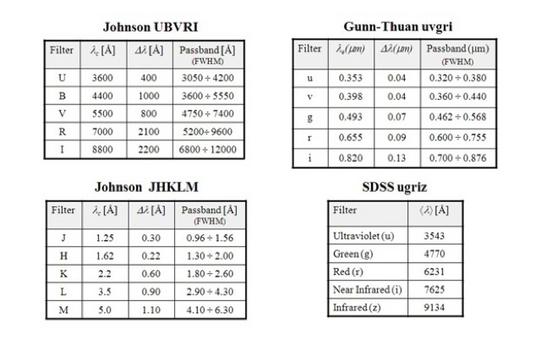 Characteristics of some well-known and widely used photometric systems.

A sample of photometric systems 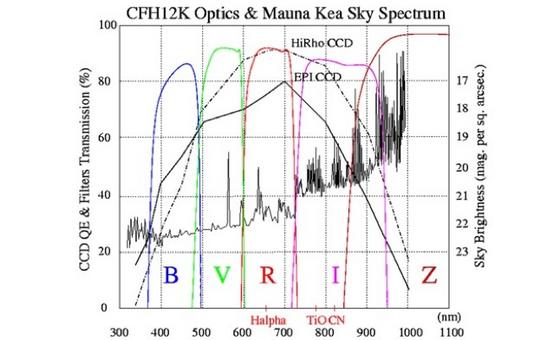 Johnson filters against the characteristics of two CCDs of the CFH12K camera installed at the CFHT on Mauna Kea. The average night sky spectrum at the Observatory is also shown; see the night sky brightness. Credit: CFHT.

Some recapitulation of the basic notions of the physics of radiation are in order. A black body is an idealized object absorbing all the electromagnetic radiation falling on it. No radiation passes through it and none is reflected [try to remember why it so important in physics].

], power per unit area per unit wavelenght per unit solid angle) is represented by the so called Planck law [which require quantization, i.e. a new physics]:

only! As a function of frequency it writes as: 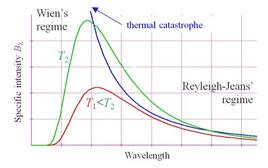 the Planck formula writes as:

The two regimes are named after Wien,

the second is unphysical as it diverges “towards” the UV (the so-called ultraviolet catastrophe).

The separation between the two regimes occurs at

at a wavelength that depends on the temperature: 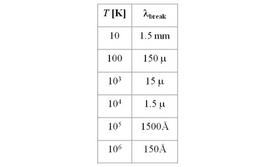 Peak wavelength vs. temperature for a black body.

Let’s integrate the specific intensity for the unit surface in any direction (semi-sphere) and for all frequencies. We obtain the Stefan-Boltzmann law:

is the bolometric luminosity per unit area and:

This is a fundamental law. 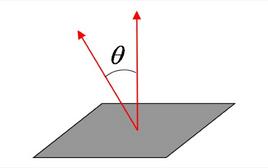 Note that the Stefan-Boltzmann law my be derived by thermodynamical principles alone, without introducing quantization. Assume a box of volume

The total internal energy is:

since the pressure is:

is the entropy, then

which are called Maxwell’s relations.

From the symmetry of second derivatives it follows:

Developing the derivatives and noting that in the LHS member

of the black body.

It is useful to remember that a black body obeys Lambert’s law: intensity is independent of the direction of observation

Since normal stars, of which galaxies are made up, are typically at a quasi-thermodynamical equilibrium (LTE), their colors are assigned by the peaks of their energy distribution,

Under this condition, the latter has a quasi-Plank behavior:

Then stellar colors are related to spectral types and effective temperatures (those resulting from the forced application of the Stefan-Boltzmann law to non-black body spectra).The largest departures occur in the atmospheres of cool stars, due to blanketing (bands redistributing blue energy into the red).

In stars there is tight correlation between color (effective temperature) and luminosity. This correlation is shown by the famous Hertzsprung-Russell (HR) or color-magnitude (CM) diagram, where we identify [recap of a previous lecture]:

A young population possesses some massive stars; they are blue (high temperature) and luminous enough to dominate the color of the population. An old population has no blue stars; its brightest sources are the low mass stars that have evolved into red giants; so it looks red. 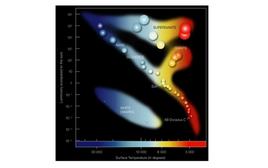 Optical colors in galaxies are caused by a mix of various dyes:

Colors are further affected by dust reddening and by redshift.

Colors have become of paramount importance in the large surveys of medium-distant galaxies. Being gross samplings of the spectral energy distribution (SED), they provide a way to determine the (photometric) redshifts of distant objects, essential to derive absolute (distance-free) photometric parameters. The efficiency of the method relies in the identification of the spectral breaks [see later], which have not been washed out by the integration (smoothing) of the SED through the transmission functions of the filters. Clearly the estimate is worse than plain spectroscopy; its precision depends on the filter set (number and distribution of the color bands available to the survey), on the photometric accuracy, and on the procedure actually adopted to apply the basic idea of photometric redshift: that of finding a redshift and a template spectrum (out of a data base of standard spectra) matching, after shifting and integrating, the multiband photometry of an object. Note that the problem is not only that of finding a solution; this must also be unique. To test it, usually researchers compare direct spectroscopic redshifts with the photometric ones in a subset of their sample.

arcmin squared, of the Southern sky where very deep observations in the IR bands J, H and K (1.1, 1.6, and 2.2 μm) have been obtained by the Hubble Space Telescope (HST). Black dots are photometric measurements made with the ESO VLT in five bands (UBVRI) and by HST (H). They are superimposed to best-fitting spectra taken from a library of more than 400,000 synthetic spectra of galaxies at various redshifts. 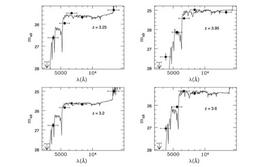 Photometric samples of celestial objects as stars or galaxies suffer many problems having to do with the effects of distance and redshift. In two papers (1922, Lund Medd., Ser. I, 100, 1; 1936, Stockholm Obs. Medd., 26), the Swedish astronomer Gunnar Malmquist (1893-1982) analyzed a very subtle selection effect affecting flux-limited samples of objects, which appear brighter and brighter on average as the distance increases. In order to derive the expression to correct for the so-called Malmquist bias, lets assume that the following conditions hold:

be the number of objects with magnitude between

in a spherical layer within the solid angle 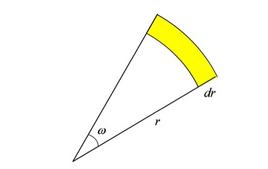 (as we assumed no absorption). The average over the entire sample gives a different value than a subsample. The average number of all objects within

is given by a basic equation of stellar statistics:

If we count the objects up to

at a given distance

Then the total number of objects brighter than

Let’s compute, using Lagrange’s Theorem of the Mean, the average values of

for a given apparent magnitude:

Note that the RHS is the derivative:

This expression tells us that, by looking at objects of our sample with apparent magnitude

is brighter than the true total magnitude

which is null only if

that is the luminosity function is a

function, or if the logarithmic gradient of

is zero. This is called Malmquist bias. The reason for this effect is that, in a magnitude limited sample, the “depth” of the explored volume is larger for brighter objects.

Objects all at the same distance do not suffer any Malmquist bias. Still the variety of luminosities, from bright to faint will determine another problem. Let’s consider, for instance, a cluster of objects (stars or galaxies) for which we want to built the luminosity function (LF)

by the following Monte Carlo experiment. Using the proper (noisy) PSF, sum up to a star of assigned magnitude

to the image of the cluster, placing it in a randomly defined position, than perform a blind analysis of the image (i.e. run your photometric extractor) and verify if the fake stellar image has been recovered. The number of successes over a large number of trials gives you the completeness lat the magnitude level

. You may ask yourself what happened to the star when you did not recover it. Likely it went on top of a brighter star, loosing its identity and contributing to make the bright star brighter. For all that it is apparent that the incompleteness in a crowded field causes an excess at the bright end of the LF and an increasing deficiency at the faint end.

Let’s write again the relation of the distance ,

holding for a universe which is transparent, Euclidean, and at rest:

and relative to the energy distribution

If the universe is expanding, and thus sources are exposed to an increasing redshift, the equation at the top of the page changes. We shall add [why add?] a term which accounts for the fact that the spectrum of the source is shifted and stretched by redshift while the observing window does not change.

In fact, for a source at redshift

and the observed flux density is:

represents the energy-loss of photons, while the variable

reminds us that, while increases, the energy distribution stretches towards the red (all happens as if the it were the band to narrow and move towards the blue). In other words, if you for instance measure the V magnitude of a redshifted galaxy, you actually observe a bluer region than for a galaxy at

and through a band which is 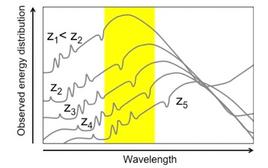 In conclusion, the observed magnitude is:

is named K-correction. There, if 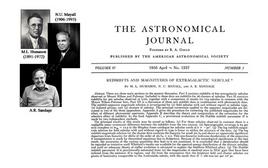 First presentation of the K-correction in this seminal paper about the Hubble diagram.