In the following we recap the formulae which leading the statistics in the processes of excitation and ionization of atoms. The Maxwell-Boltzmann distribution accounts for the velocities of non-relativistic gas [what is gas in this case] particles subject to short range interactions only [gravity too?] and sufficiently far from quantum effects. It applies to systems in thermodynamic equilibrium (i.e. at thermal, mechanical, radiative, and chemical equilibrium). The number of particles with velocity between

is the total number of particles [show that the distribution is normalized. Hint: integrate

over all velocities], each of mass

[Note the dependence on the mass. What does it happen in a gas if for some reason each particle splits into two?],

is the Boltzmann constant, and

the temperature in Kelvin.

gives the most probable velocity:

is the mean velocity

For a population of atoms in equilibrium, the statistics of the excitation states is given by the Boltzmann equation:

is the measure of the degeneracy of the corresponding state (“a” or “b”), i.e. the number of combinations of the atomic quantum numbers of the level [which are they?] giving the same energy

is the Boltzmann factor for the j-th level.

The relative populations of two ionized states separated by the energy

are accounted for by an equation written by the Indian physicist Meghnad Saha in 1920:

is the partition function:

which accounts for the number of way the atom may arrange its electrons for the same level of energy;

is the number density of electrons of mass

is the Plank constant, and

the ionization potential. It is useful to note, similarly to Lotka-Volterra predator-prey model, excitation and ionization work one against the other: the more you ionize your gas, the less is left over for excitation.

This concept is well exemplified by the case of the hydrogen atom and its degree of ionization in a stellar atmosphere. The Saha equation will be used to calculate the fraction of atoms that are ionized,

The energy of the first excited state of hydrogen is

above the ground state energy.

for the temperature regime under consideration, thus the Boltzmann factor

and so nearly all of the HI atoms are therefore in the ground state. The partition function then simplifies to

. Inserting these values into the Saha equation with

gives the ratio of ionized to neutral hydrogen,

. This ratio is then used to find the fraction of ionized hydrogen,

This figure shows that when

, essentially none of the hydrogen atoms are ionized.

of the atoms have become ionized. Half of the hydrogen is ionized at a temperature of

of the hydrogen is in the form of HII. 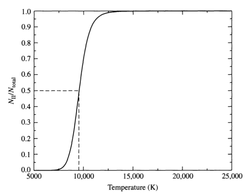 NII/Ntotal for hydrogen from the Saha equation when Pe=20Nm^(-2). Fifty percent ionization occurs at T≈9600K

, instead of at the much higher characteristics temperatures [Which order of magnitude?] required to excite electrons to the

The strenght of the Balmer lines depends on

, i.e. the fraction of all hydrogen atoms that are in the first excited state. This is found by combining the results of the Boltzmann and Saha equations.

Because virtually all of the neutral hydrogen atoms are in either the ground state or the first excited state, we can employ the approximation

As we can see from the figure on the right, the hydrogen gas would produce the most intense Balmer lines at a temperature of

, in good agreement with the observations. The diminishing strenght of the Balmer lines at higher temperatures is due to the rapid ionization of hydrogen above 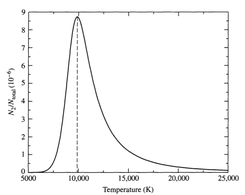 N2/Ntotal for hydrogen from the Boltzmann and Saha equations, assuming Pe=20Nm-2. The peak occurs at approximately 9900 K. 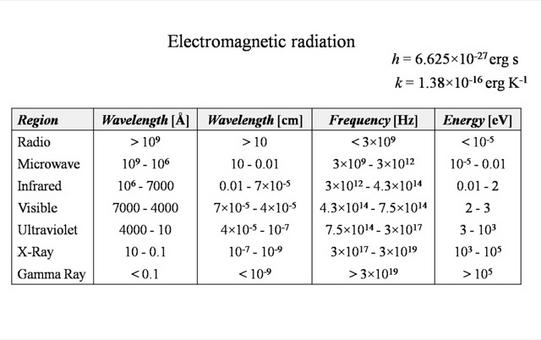 The 21-cm line of neutral hydrogen

Neutral hydrogen (HI) consists of a single proton orbited by a single electron. The spin of the electron and proton can be either parallel or antiparallel (hyperfine structure):

i.e. in the radio domain. This transition is highly forbidden with an extremely small probability of

(possible only at very low densities). The very long lifetime allows the line to have a very narrow width [why?]; most of the broadening comes from the Doppler shift. The lifetime gets shorter by collisions with other atoms and by interaction with the cosmic microwave background radiation. Jan Oort and his student Hendrik van de Hulst were first to guess that, in spite of the inefficiency of the process, the huge amount of HI in the interstellar space should secure a detectable signal. Actually, since World War II, the 21 cm emission line of HI has become a powerful way to gauge the kinematics of galaxies. 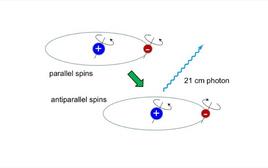 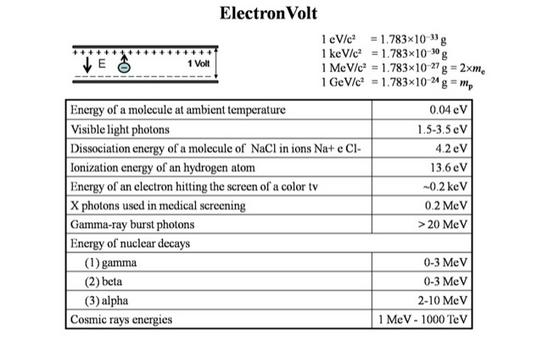 How good is your measure: signal and noise

is the number of photons detected from a source. But not all of the incoming photons are actually detected and converted into electrons [modify the concept for photographic emulsions and all non linear detectors].

The ratio electron/photon is the “quantum efficiency”, typically of the order of

in modern detectors (Charge Coupled Devices = CCDs). So, in the following the signal will refer to the number of electrons (to use photons you need to consider the gain):

is the number of electrons per second, and

the total exposure time. The latter may be split in

(for reasons which include saturation, cosmic rays removal and, in mosaics, filling of image gaps), so that:

which comes from the combination of random contributions to the signal from various sources. We want to calculate the so called signal-to-noise ration,

The noise associated to

has the following sources.

is associated to the

electrons arising from the signal of the source, so:

is associated to the signal

) over where the source is measured, so:

Dark noise: is the shot noise applied to the dark current. It is due to

thermal electrons (per pixel and per hour) produced by the detector (in spite of the cooling devices):

It is another source of noise associated to the reading of the detector, which depends on the detector and on the mode it is read. The

is the read-out noise, in

for every reading (you add noise at each reading) and per pixel:

Summing up all sources:

S/N: observation of a bright source

Consider a bright enough source so that the dominant noise is its Poisson noise, the others being negligible. So:

Application: bright stars in imaging and spectra. Note that in these cases the problem is usually not that of reaching a good S/N, but rather not to saturate the detector [what happens then?].

Let’s consider the case of a faint star with a bright sky background:

The consequences are that:

decreases (but not as fast). Since, for point-like sources,

The signal-to-noise ratio increases as:

Let’s ask the following question: given a sky-noise dominated observation of a bright star, which is the aperture size through which the

is maximum for a given seeing? To this purpose we assume that, due to seeing, the stellar image is Gaussian:

measures the seeing.
Then, within

pixels, the signal is:

and the exposure time

the signal-to-noise ratio is:

that is the most favorable aperture has a radius 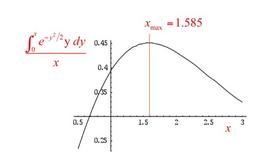 If sky and dark are very small, and the RON is left to dominate, then:

By binning the data (reading the combination of

but loose the same in resolution.

You may try to reduce the number of dithers to the minimum, making the sub-exposures as long as possible. The cost is more cosmic rays and, in case of mosaic detectors, a higher unevenness of the weights of the single pixels [why?].