«Clusters of galaxies are gravitationally bound configurations containing typically hundreds of galaxies in a region about 1025 cm in size. They range from irregular clusters, with strong subclustering, no strong central concentration, and mainly spiral galaxies, to regular clusters, with smooth and centrally condensed galaxy distributions containing few spiral galaxies. Observations of these clusters of galaxies show that they are bright X-ray sources, with luminosities of 1043-45 ergs/sec. It is now established that the emission mechanism is thermal bremsstrahlung from hot (~108 K), low-density (~10-3 atoms/cm3) gas. This intracluster gas has a distribution similar to that of the galaxies in the cluster and fills the space between the galaxies. Remarkably, the total mass of hot gas in a typical cluster is similar to the total mass in all the stars in all the galaxies in the cluster. The X-ray spectra of clusters show strong x-ray line emission from iron and other heavy elements; this indicates that a significant portion of the intracluster gas must have been ejected from galaxies in the cluster. Recent X-ray observations from the Einstein x-ray satellite show that intracluster gas is cooling in some clusters and being accreted onto large, central galaxies. X-ray images from Einstein also suggest that the morphology of the gas mirrors the dynamical state of the cluster.» (from C. L. Sarazin, X-ray emission from clusters of galaxies, Reviews of Modern Physics, 58, 1, 1986)

Image of a cluster 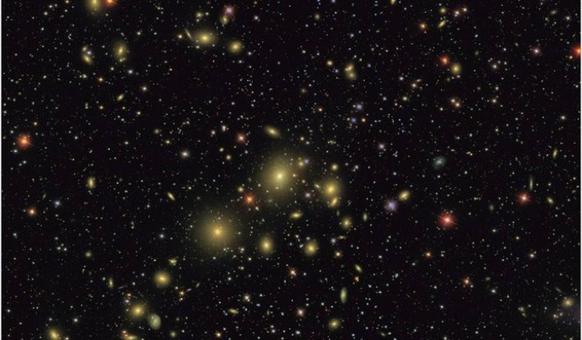 Distribution of galaxies in space

The picture in the next slide is a slice of the universe, showing the texture of the baryonic matter (galaxies), with clusters, filaments, and voids.

Each wedge is the collapse of all the data within the strip of the sky surface shown in the upper-right figure.

This picture is traced by the baryons but it is controlled by the unseen and dominant distribution of the Dark Matter. This latter does not interact with electromagnetic forces; its presence is revealed only by the gravitational effects it induces on the baryonic counterpart.

Distribution of galaxies in space 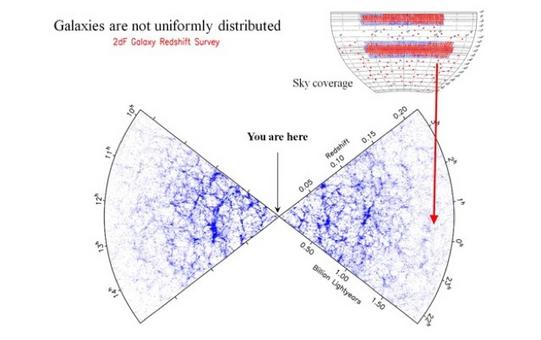 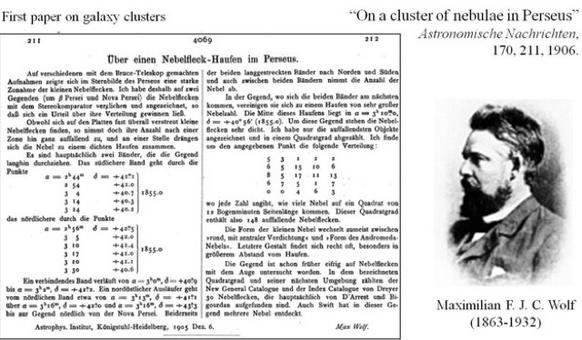 The first systematical studies of galaxy clusters (GCs) were made possible by the availability of wide-field sky images as those of the first Palomar Sky Survey, which covers the full Northern Hemisphere. This is why the first large catalogues of GCs were produced only at the end of the Fifties by G. Abell (1958) and then by F. Zwicky and co-workers (1961-1968). They were derived by a visual inspection of the Palomar plates on the ground of some a priori selection criteria. The first major progress in the study of clusters is due to a paper by George Abell published in 1958. 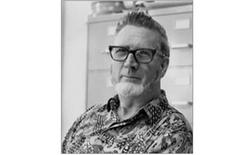 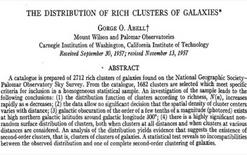 The first Abell catalogue, containing 2712 clusters, has been obtained by visual inspection of the photographic plates of the Palomar Sky Survey (PSS), a photographic survey of the whole Northern sky. In 1989 the Southern extension brings the number of clusters to 4073. Abell criteria to select cluster are:

1 – Richness R: each cluster must contain at least 50 members with

is the magnitude of the third brightest galaxy. The richness of a cluster is defined to be the number of member galaxies with apparent magnitude between

2 – Compactness: only galaxies with distances to the cluster center smaller than

(corresponding to the Abell radius RA = 1.7′ / z = 1.5h-1 Mpc, where z is the cluster redshift) are selected as members. Given the richness criterion, the compactness criterion is equivalent to a density criterion;

of the cluster should be in the range 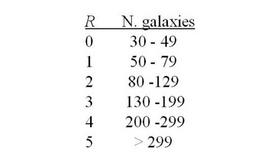 Cluster richness criteria according to Abell.

Selection criteria for the Zwicky clusters:

1 – Size: these galaxies must lie within the cluster’s contour, defined as the isopleth where the projected density of galaxies is about twice that of the neighboring field;

2 – Richness: an isopleth must contain at least 50 galaxies of magnitude brighter than

is the magnitude of the brightest galaxy. [Notice the difference with Abell's choice.]

These criteria are less restrictive than Abell’s, and thus the Zwicky catalogue contains many more clusters which are less rich. 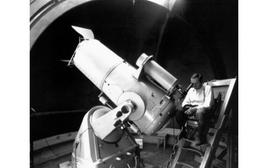 Fritz Zwicky at the 18-inch Schmidt telescope on the Mt.Palomar.

Note on redshift (distances) of clusters

The distances (redshifts) of Abell clusters were originally estimated from the apparent magnitude of the tenth most brilliant galaxy, assuming that this latter has about the same luminosity in all clusters. Similar methods were adopted later on, until spectroscopic redshifts became available for a large number of objects (owing to the coming into operation of multiple objects spectrographs). The problem of redshift is also connected to that of the membership: how do you know that a galaxy projecting onto a cluster is actually a member of that cluster? 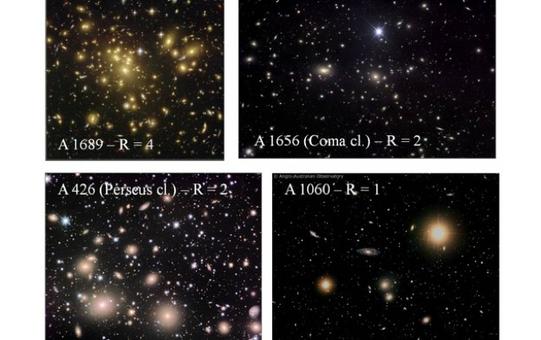 Besides richness, clusters differ for their shapes and for the relative content of galaxies of the various morphological types (morphological segregation). There are several classification criteria based on various parameters. 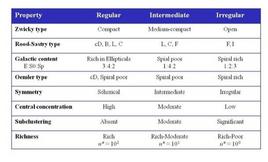 These classification schemes are strictly correlated: it is now evident that the morphology of clusters is described by a one-dimensional sequence: 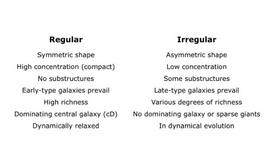 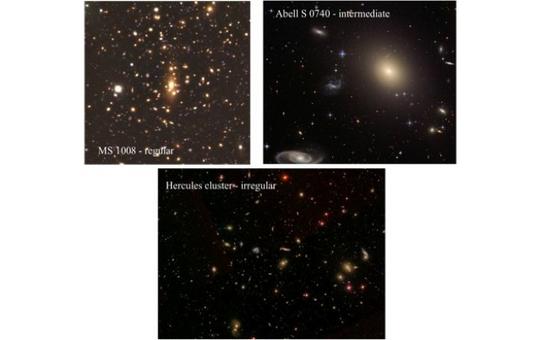 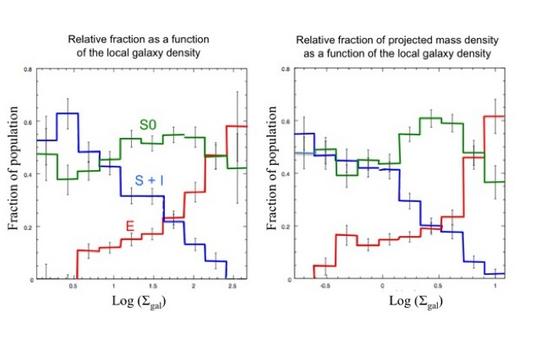 The radial velocities of the individual galaxies,

are measured by the Doppler shifts

properly corrected for the motions of the observer. The redshift of the cluster is the average:

The distribution of the radial velocities of the galaxies in the cluster is characterized by the (radial) velocity dispersion:

a quantity which is of the order of

Assuming the cluster to be at the dynamical equilibrium (likely the case for regular, relaxed clusters), we are in the condition [are we really?] to apply the Virial theorem

is the kinetic energy and

the total mass of the cluster, and

is the potential energy.

It follows that the total mass is:

Note that the “average size”

must be given in linear units (e.g. parsecs); thus the distance must be known [how do you determine it?]. For

In other words, clusters are the largest and the heaviest structures of the universe.

Zwicky (1933, Coma cluster) and Smith (1936, Virgo cluster) were first to apply the Virial theorem to clusters. They found that the total mass of clusters is 10 times larger than the total mass obtained by summing up the masses of the member galaxies. This was described introducing the concept of missing mass. Eventually it has been clarified that this missing mass is just dark matter, i.e. matter which does not interact with electromagnetic radiation. 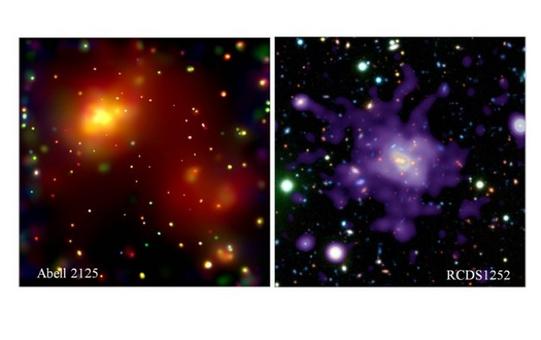 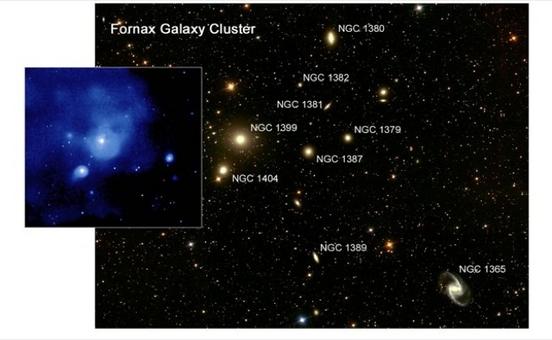 The Fornax cluster of galaxies (Credit: A. Karick and M. Gregg - LLNL/UC,D), with the map the X-ray emission around the brightest cluster member, NGC 1399 (Credit: NASA/CXC/Columbia/C. Scharf et al.).

The existence of a significant number of stars in between galaxies is not a recent achievement. In 1970 Gérard and Antoinette de Vaucouleurs (Ap.Lett., 5, 219) showed that, as already pointed out by Zwicky in 1951, the brightest galaxies of the Coma cluster overlie their halos, as if there were no discontinuity between them. They spoke of intergalactic matter. Intergalactic stars have been discovered in the Virgo cluster empty fields by HST. Intracluster planetary nebulae have been also discovered serendipitously in the Virgo cluster while exploiting the peculiar features of PNe spectra: almost no continuum and strong emission lines (cf. Arnaboldi et al., A.J., 125, 514, 2003 and references therein). Are these stars the remnants of dwarf galaxies, long since destroyed by the cluster potential, or have the stars been harassed from their parent galaxies at recent epochs? Most of these intergalactic stars are old and surprisingly metal-poor (1/3 Solar metallicity). This suggests that the stars were born in small Virgo galaxies which disintegrated and at the edges of the large galaxies which tore the small ones apart, as suggested by cosmological simulations (White and Frenk, Ap.J., 379, 52, 1991). Intracluster light (ICL) has been recently detected and mapped deep CCD photometry (Feldmeier et al., Ap.J., 575, 779, 2002) and by stacking up randomly several hundreds of SDSS cluster images, each centered on the brightest cluster member, after removal of all other galaxies and stellar images (Zibetti et al., M.N.R.A.S., 358, 949, 2005). By this clever improvement of the S/N, it has been possible to demonstrate that the central galaxy is surrounded by a luminous envelope as large as the cluster and containing up to 10% of the total cluster light.

) X-ray emission. This emission is associated with a very hot gas (

) with mass of the same order of magnitude of the total mass in galaxies. The chemical component of this gas (e.g. Fe) shows that it originates from the galaxies. This hot gas interacts with galaxies causing feedback processes.