We start to gauge galaxy masses (in solar units,

). It is very convenient [but appropriate also?] to model galaxies by a sequence of thin oblate spheroidal layers. Each of these layer has a constant surface density

is a radial distance on the equatorial plane (see figure in the next page).

(painted blue) contribute to the force:

is the galaxy potential.

The outer ones (green) do not play any role, in consequence of a theorem due to Newton, which applies to triaxial ellipsoids in general.

for a spherical distribution [what about other shapes?] is: 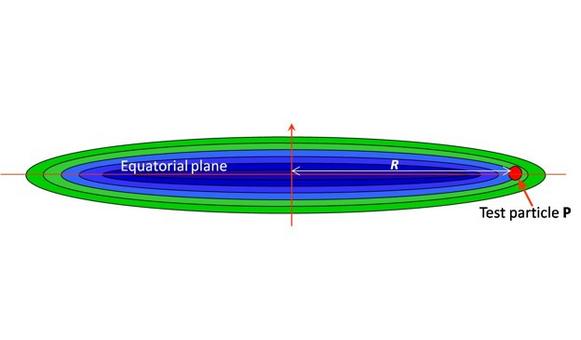 Newton's Theorem: a galaxy is pictured as a sequence of thin, oblate spheroidal layers, and a particle P feels the only force exerted by the mass (blue) within its distance R from the center. The mass outside (green) has no effect.

We start by the simple case of disk galaxies (but we better keep well in mind that a spiral galaxy is not just a disk). There are a core, a bulge and dark halo, and, on top of the disk, there are the spiral arms.

) law and the total luminosity is easily found to be:

is the surface brightness extrapolated to the center.

Given the surface brightness profile of a galaxy,

, and assuming circular symmetry, the total luminosity of a galaxy is obtained by considering the cumulative luminosity distribution, as the integral over a circular area on the sky:

from which the total luminosity is given by the integral up to infinity,

and, by definition the luminosity at the effective radius, is:

(this is considered constant for each component: bulge or disk). For instance, the cumulative stellar mass is given by:

where we have indicated with

Let’s start by using the disk galaxies’ rotation curve to obtain an estimate of the mass of these systems. We remark here that the dynamical mass of galaxies is conceptually different from the baryonic (stars or gas) mass. The latter has been obtained without using dynamical argument. This means that the baryonic mass is not necessarily the whole density component in the Poisson equation. If so, the systems is told “self-consistent”.

We will see that in galaxies there might be other possible source of the total potential. An indication of some additional mass component in galaxies was provided in the Seventies by the rotation curve of spiral galaxies (see figure). These roughly measure the circular speed as a function of the radius of the gas (and/or stars) contained in the disks. 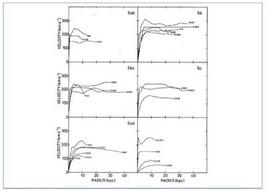 The basic tracers adopted for these measurements are: hot stars ionized gas by measuring their H-alpha emission; neutral atomic hydrogen gas by measuring the 21 cm line from the spin transition in the hydrogen atoms. It can be demonstrated that a rough estimates of the dynamical mass of the galaxies can be obtained trough the formula:

is the rotation velocity and

is a geometrical factor which, depending on the flattening of the system is

(from disk to sphere).

From rotation curves to DM halos

From the eq. (2) one realizes that the flat rotation curve observed in spiral implies a mass growing linearly with the radius. In fact, if:

, which is inconsistent with what we would measure from eq. (1) where we have seen that the mass should asymptotically flatten to the local luminosity (and mass assuming a constant

If we consider qualitatively the analytic expression expected for a rotation curve in a system with a finite mass we can easily see that this is expected to have a Keplerian fall, following a

trend outside a certain radius.

Given an exponential disk, within

) it is enclosed about 90% of the total disk mass, i.e. the galaxy is almost ended. If so, from the definition of circular velocity from the Netwon’s theorem:

which has the above mentioned Keplerian fall.

From rotation curves to DM halos

being this the consequence of the linearity of the potential:

Let’s derive some property of the dark matter halo. We have seen that where the dark halo is dominant (i.e. the region where the rotation curve stays flat): 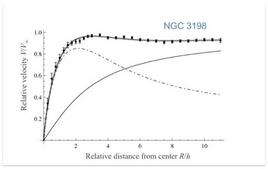 The density profile of the singular isotermal sphere is:

The mass distribution of the isothermal sphere is:

To avoid the problem of the infinite density at the center there are some variation of the isothermal sphere.

One is the following pseudo-isothermal law:

i.e. the density distribution has a core.

The mass distribution in this case is:

and thus needs to be truncated

The dark matter (DM) is an unknown form of non baryonic collisionless matter which does not emit any radiation (it does not interact with electromagnetic forces) and cannot be directly observed but whose presence can be inferred from gravitational effects on visible matter.
There are different candidates predicted particle physics which include the neutrinos, and possibly hypothetical entities such as axions, supersymmetric particles or weak interacting massive particles (WIMPs). Nonbaryonic dark matter is classified in terms of the mass of the particle(s) that is assumed to make it up, and/or the typical velocity dispersion of those particles (since more massive particles move more slowly).

Observations of the Large Scale Structure and the evolution of the gravitational systems like galaxies and cluster of galaxies seem to support a Cold Dark Matter scenario. The figure shows a frame of the biggest simulation of the dark matter structures in the Universe.
This is the so called Millennium simulations. 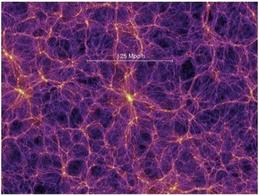 A snapshot of the Millennium simulation (from V. Spriengel).

Here the cosmological model adopted is the so-called

as a term for a further (dynamical) ingredients in the Universe: the Dark Energy. The existence of this further dark and unknown component has emerged at the end of the Nineties when the observations of high-redshift supernovae have revealed that the universe is expanding.

The Dark Energy (probably similar to the concept of vacuum energy) is the term which take into account this acceleration in the Einstein equations of the dynamics of the Universe. The current (main) cosmological parameter set which characterizes the

the rms of the primordial density fluctuations within

are defined as the ratio between the total density of the particular constituent and the critical density, i.e. the density for a flat Universe in the Einstein equations, which is:

In the figure in the previous page, the filamentary structure of the dark matter in a

universe is evident. In particular, massive cluster-like spheroidal concentrations of mass in the filament crossings. This peculiar structure of the mass distribution is also dubbed “Cosmic Web”.

N-body (collisionless) simulations are a powerful tool to study the distribution of the unseen dark mass in the Universe. Of course the density distribution is based on a model assumptions and it needs to be checked a posteriori in real systems (e.g. galaxies). In cosmological simulations, the first step is to identify the dark matter halo and group by typical scale and masses (dwarf galaxies, normal galaxies, group of galaxies and cluster of galaxies). Then, the density profiles of the individual dark matter halos are derived and statistically averaged to obtain the typical dark matter halos for different gravitational systems (see figure). N-body cosmological simulations have shown that the density profiles of dark matter halos have a quasi-universal shape since they are only mildly different over many (dex) decades of mass scales (i.e. from dwarfs to clusters; figure).

are the characteristic density and scale radius of the halo.

The cumulative dark halo mass is:

where G is the gravitational constant. The halo can be alternatively parametrized by the Virial mass and concentration:

All Virial quantities (the Virial radius, mass etc.) are defined at the distance where the mean overdensity value is

is the critical density defined above. 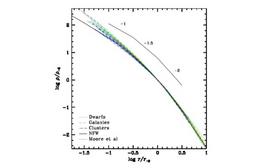 then from a slope -2 for

and a slope -3 for large radii. The expected values for these model parameters are not arbitrary in the current cosmological model. For instance, in a collisionless

universe, a mean relation is expected between mass and concentration such as the following:

where the relation has a 1~

and is valid for:

The decomposition of the observed rotation curve in the different component is extremely difficult. In the figure presented in the next page there are different models which allow a fair representation of the observed rotation curve for the galaxy. The Maximum disk is the model which assumes the maximum the stellar mass (and the minimum the dark mass). It provides a reasonable fit to the data. From the top panel is clear that for this kind of models the stellar circular velocity alone approximates well the central regions where the dark matter is almost absent, while it starts to be dominant outside a few kpc. This approach is realized by adjusting the

of the disk component (see, e.g., Eq. 3) in order to find the best fit of the rotation curve in the central regions, where the baryonic component shall dominate and then add a dark matter component of the form discussed above, to find the best fit to the data. The Minimum disk model, on the contrary, assumes the smallest stellar

possible (according with reasonable stellar population models) and then maximizes the contribution of the dark matter which starts to be dominant already in the galaxy center. The latter approach favor more dark matter concentrated solutions for the data interpretation. Both cases, though, start from some priors which might bias the conclusion of the mass analysis. 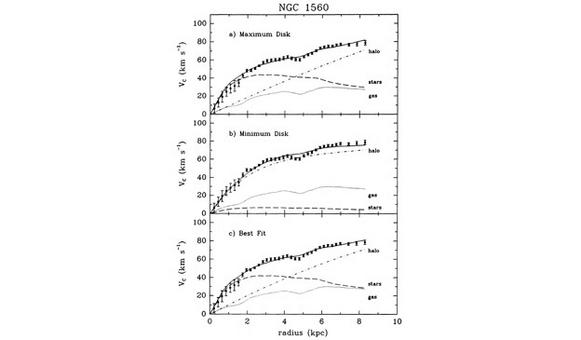 In the more general case, the baryonic (star and gas) and dark matter components are contemporary mixed in order to find the best fit to the data. From what we have learned so far, a best fitting procedure for the galaxy rotation curves is mainly a 3-parameter problem. In fact, in Eqs. 4 and 5 we have: 1) the circular velocity of the gas is generally given by the radio observations (i.e. the mass of the HI is obtained by the gas column density which is directly observable with the radio telescopes); 2) the stars’ circular velocity is obtained by converting the surface brightness in to a mass density via a constant

for the isothermal sphere or

for the NFW. The three parameters are left free to vary in a limited volume of the parameter space and the best fit is found by

minimization (between the model values and the data). In the bottom panel of the figure in the previous page, the best fit is only slightly different from the Maximum disk case, but there are galaxies which deviate substantially from the Maximum disk. You may practice with the modeling of the spiral rotation with a nice Java applet, RotCurve by Chris Mihos.