All the ingredients of a galaxy (stars, gas, dust, DM) must move in order to oppose the self-attraction and prevent the overall collapse of the system. For sake of simplicity, for now we model the galaxy as an ensemble of

(relative to the barycenter), and rest-frame spectral energy distribution

of the galaxy image, they project

, all those within the column along the line of sight. Each one appears to possess a radial velocity

once the systemic velocity 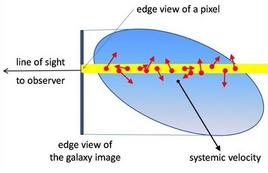 Let us call rotational velocity, at the given galaxy image pixel, the mean of all the radial velocities

along the line of sight:

These quantities, though having a direct dynamical meaning, cannot be measured in what the galaxy particles are usually not resolved. 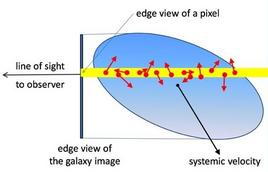 Normally (exceptions are particular dynamical tracers as, e.g., Planetary Nebulae, Globular Clusters, and satellite galaxies), all we can do is to extract rotational velocity and velocity dispersion from the integrated spectrum of each pixel

(its size will be likely defined by the resolution of the spectroscopic setup [how?]). Ignoring internal extinction, if any, the assumption is that we can evaluate

weighting by the luminosity instead of the mass [Isn't it the same thing?]:

is the center of the (narrow) spectral band (e.g. a spectral line) where we make the observation (we shall see later why it depends on the velocity), and:

How do we measure the above kinematical quantities? By measuring the integrated spectrum

. This is the sum of the spectra of all the particles properly shifted in wavelength by the Doppler term:

Imagine that the rest-frame spectra of all particles have one line narrower than the resolution, thus infinitely narrow. How will it appear to an observer? Shifted according to

, and more or less deep according to the way it is in the individual spectra. 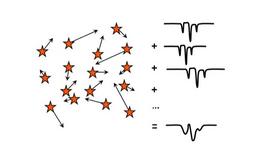 Sketch of the reason why composite spectra of galaxies have broader lines than individual stars (Doppler broadening).

Since spectroscopy adds one further dimension, that for the wavelength, and since optical detectors are two-dimensional [what about radio detectors?], it is clear that one exposure can map at maximum one spatial dimension of the two of a projected galaxy image. This is achieved with a (long) slit, which maps one strip of the galaxy image. The slit width is measured in wavelengths (or equivalently km/s [how?]), the length in arc seconds [Note the difference between the spectra of point like sources and extended sources. They may seen alike but the extension of stellar spectra is obtained by trailing the image along the slit]. A galaxy spectrum is then a sequence of monocromatic [but how much such?] images cut by the slit. Modern 3D spectrographs such as the panoramic integral field spectrograph Sauron provide at once a complete datacube, that is 3D matrix made piling up image slices at increasing/decreasing wavelength (velocity). The trick of redistributing a datacube in two dimensions is achieved by sampling the image with lenslet arrays or fiber bundles, or by slicing it with ad hoc optics. 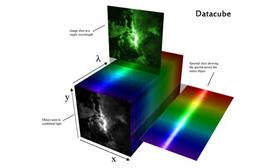 ) as they are  emission lines of spiral galaxies (outside the nucleus, if this is active). [It is instructive to get acquainted with the classical procedure of measuring spectra by eye, following all the steps of wavelength calibration, distortion correction and so on, down to the derivation of the radial velocities].Typical (strong) emission lines in the optical spectra of galaxies, from blue to red, are:

Other Balmer lines may be in emission, down to

. Another very important emission line is in the radio domain, at

line is the spontaneous spin transition of HI, the Hydrogen atom at the ground level. Because of magnetic interactions, the configuration with the electron and proton aligned in the same direction (parallel) is slightly more energetic than the other one (anti-parallel). This transition between these two states is highly forbidden, with an extremely small probability of

. The corresponding, extremely long lifetime can be considerably shortened by collisions. At astronomical level the rarity of the event is won by the huge number of potential emitters [estimate the number of events per seconds in a 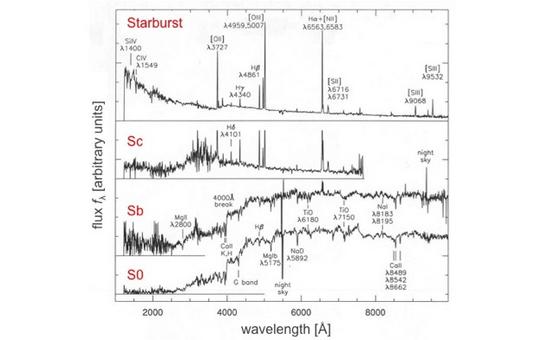 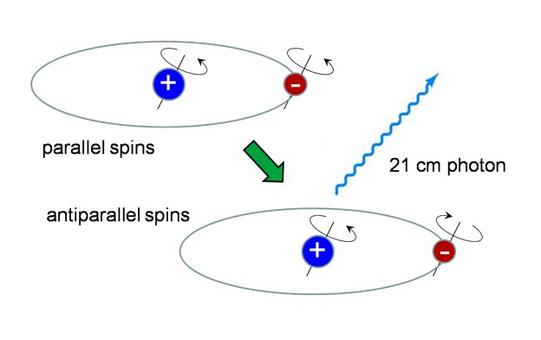 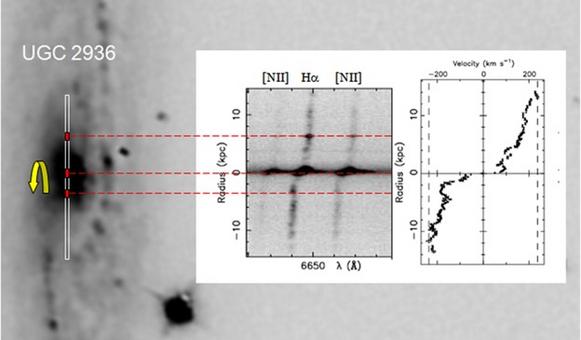 From the spectrum along a slit placed along the apparent major axis of the galaxy to the rotation curve.

Rotation of a flat disk: projection

two unit vectors orthogonal to the orbital plane and along the line of sight (see figure), the rotational velocity vector is:

and the (observed) radial velocity (relative to the barycenter):

[Repeat the exercise for a disk having a velocity which still depends on radius (axial symmetry) but which is not purely tangential (expanding/contracting disk).] 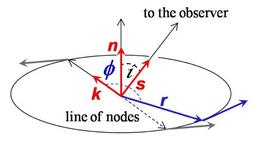 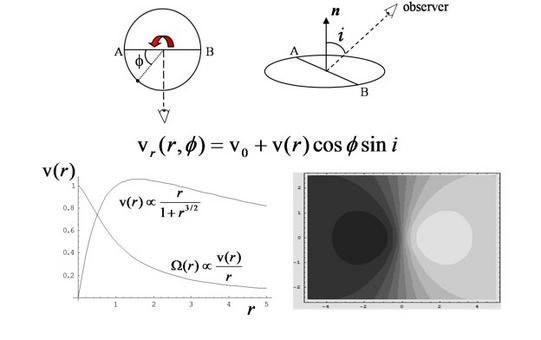 Application of the formula giving the radial velocity field of a purely rotating disk seen at an angle i. The rotation curve (formula reported in the figure) mimics well enough a real galaxy. The inclination of the example at the lower right is 45°. 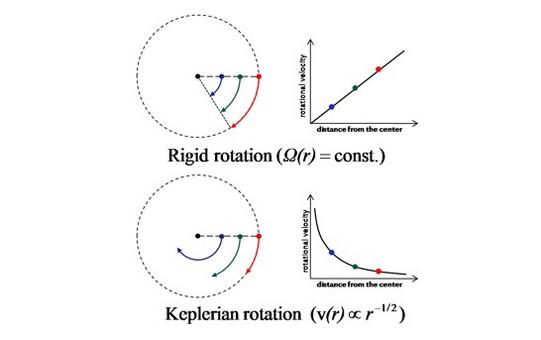 Observed rotation curve vr(R) of a thin disk in rigin (top) and keplerian (bottom) rotation. R is the apparent distance from the center of the galaxy image along the kinematical major axis.

Rotation of a flat disk: expectation

What is the shape of the rotation curves of real spirals? Up to the ’70s, the expectation, apparently supported by the observations, was a combination of an inner rigid rotation with an outer Keplerian rotation. The curve

. The turning point would demark the range where the mass of the galaxy was no longer increasing significantly with

[try to understand why this is so, why the rotation curve is then called keplerian, and ask yourself if the explanation you found for this expectation bears no assumptions of the relation between surface brightness and surface density of matter]. Actually, since 1975 ca. the deep and accurate rotation curves produced by radio astronomers using the 21 cm hydrogen at the fundamental state (spin transition) have disclosed a different scenario. There is no Keplerian decline; the rotation curve raises up and than remains roughly flat. We shall see later why this is an indication of the existence of the Dark Matter. 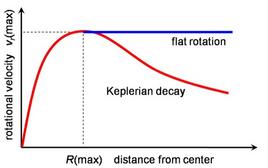 Expected rotation curve of a spiral galaxy vs. that observed. 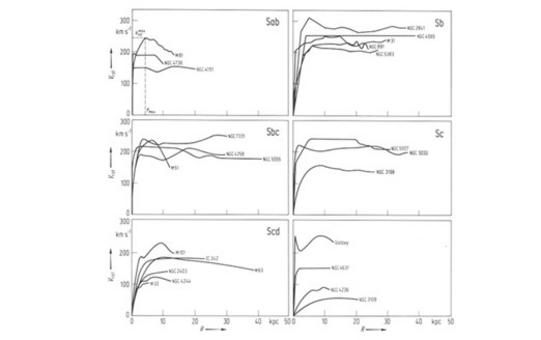 Rotation curves of 25 galaxies of various types, including our own Galaxy, from optical measurements of emission lines and radio measurements of the HI line at 21 cm (from A. Bosma, Ph. Thesis, Gröningen Univ., 1978).

What is the shape of a spectral line from an unresolved galaxy disk? The question is far from being academic since lack of spatial resolution, typical of former radio observations, still affects very distant objects.

Now, compute the histogram of the velocities. It will be clearly symmetric, with two peaks separated by twice the maximum rotational velocity (see figure).

To make a more realistic line shape, one shall weight the velocities by their surface brightness and add some noise. The symmetry is less perfect and the peaks less pronounced, but the conclusion remains the same.

Let us compute the shape of a spectral line of an unresolved exponential disk using a rotation model:

shown in the figure for two values of

and gray is for

, in arbitrary units. The models flatten to

In the next page we reproduce the simulated velocity distributions for our exponential thin disk seen edge-on, chosen to have a disk scale length

(arbitrary units as above) and characteristic radius of the rotation law

(top-left in the figure) and

. The measurement errors broaden the whole velocity distribution, an effect which is more evident for the two peak which are used as a rough estimate of the maximum velocity of the disk

. In both cases the last measured data-point is at 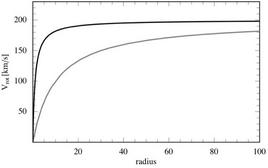 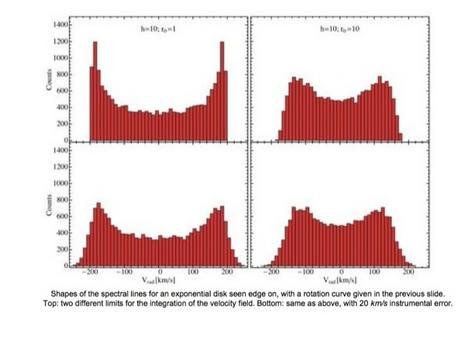 If the spectral lines are broad (larger than the instrumental widening), it is hard and inaccurate to measure directly the rotational velocity. In any case it is necessary to estimate also the velocity dispersion. Both quantities are obtained simultaneously by comparing the galaxy spectrum with a template spectrum of a stellar (like) object with narrow [how narrow?] lines and known redshift, properly broadened to match the dispersion, shifted to mach the radial velocity, and rescaled to match the depth of the spectral features in the band where the comparison is made. Let us assume that the galaxy spectrum

(which is the ratio of the line strengths in the galaxy and in the star). Replacing the wavelength with the velocity thought the Doppler formula

You can solve equation (1) by chasing the values of

which provide the best value of some optimization estimator, e.g.

. For instance, one might explore the entire parameters volume, searching for the minimum of the estimator [why not?]. Actually you can do better by the procedure described by Rix and White. Alternatively, you may exploit the Convolution theorem [revisit the properties of the Fourier transform]:

where the upper tilde indicates the Fourier transformations of the corresponding functions.

The Fourier Quotient method is based then on the assumptions that:

This method appears far simpler than the one above, but it is not so.

is easy to compute but the result is useless because of the noise [discuss why quotients are very sensitive to noise].

Usually rotation curves are symmetrically placed about the center. You may fold them by changing the sign to both radius and velocity on one of the two sides opposite to the center (this is a good way to evaluate the systemic velocity).

Apart from the effects of the noise, the folded rotation curves are expected to possess only non-negative velocities. [Why? Think to the angular momentum vector.]

Actually this is not always true, and the deviation we are going to describe calls for an explanation. In some galaxies it has been found that the overall spin vector may change its direction in the central regions, up to the point of being oriented in the opposite direction. These conter-rotating cores manifest a relevant kinematical decoupling with the rest of the galaxy. As we shall see later, they may be the remnants of a merging event where the angular momentum of the victim has not yet been digested with an increase of the velocity dispersion [why so?].

Other kinematical anomalies concern the presence of a nuclear black hole causing the formation of an Active Galactic Nucleus (AGN) or simply causing a very steep turn up of the velocity dispersion: a phenomenon discovered before the launching of HST but tackled mostly by the very high spatial resolution spectra produced by this telescope in space. 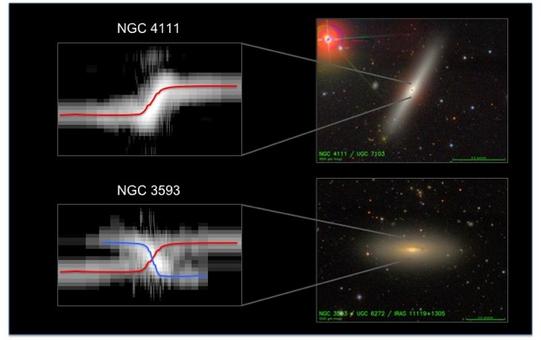 An example of a kinematically decoupled core (NGC 3593) compared to a rather normal S0 (NGC 4111), characterized by a steep raise of the central velocity. Credits: spectra from K. Kuijken, images from SDSS.

Hidden counter-rotation in the core of NGC 4374 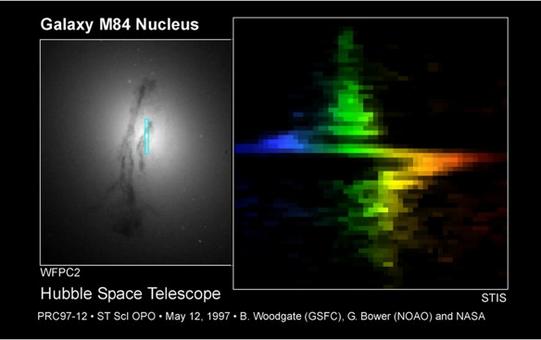 HST spectrum of the central region of the S0 galaxy M84 = NGC 4374. Notice the prensece of the dust ring. Credit: NASA.