The analysis of the isophotes of elliptical galaxies by simple ellipse fitting poses some interesting questions:

1. Do the residuals from the fit (observed – computed = O - C) show any systematic trend?

2. And, if so, does this trend correlate with other structural and/or physical parameters?

3. Can we tell just from the surface photometry whether ellipticals are intrinsically oblate or prolate?

4. How do we understand the twisting of the isophotes, which is incompatible with axisymmetry?

Let’s tackle the first question by arbitrarily defining the

residuals of the ellipse fitting as the distances

from the best-fit ellipse of the points

sampling the isophote, evaluated along the radius from the ellipse center to

, which has a central anomaly (azimuth angle)

. The question is whether the function sampled by

, is nothing but noise. If not [but how to decide?] we may analyze it by a truncated Fourier series [Why truncated? And at which term of the series?]. 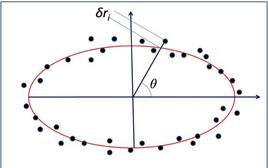 sampling the isophote with a truncated Fourier series:

is the mean isophotal radius [which mean are we speaking of?],

are related to the best-fitting ellipse center, and

to the flattening and position angle.

The remaining terms are the deviations with respect to a pure ellipse. Those with an odd index

trace the non-axisymmetric behavior, and are unexpected in galaxy isophotes.  The even terms map symmetric deviations.

The relative amplitudes of these deviations are measured by

, and their phases by the ratio

In order to better understand the meaning of the coefficients, it is helpful to plot the family of closed curves:

, the perception of the shape changes with the sign of

, the figure looks elongated along the x axis and compressed along

, thus deserving the name of “disky“; if

it looks “boxy“. The effect increases with

, and is more apparent if the figures are orthogonally projected using the x axis (

is the surface brightness of the chosen isophote.

The application of the Fourier expansion to the isophotes of bright local ETs galaxies has shown (Bender et al., 1988) that ~80% of them can be classified either boxy or disky (in some cases both classes apply to different regions of the same object).

Is this categorization meaningful? Ralf Bender (A&A., 193, L7, 1988) was the first to give an answer to this question, showing that the two new classes correlate with the velocity anisotropies (which in turn had been found to correlate with the luminosity).

Then Bender et al. (1989) found challenging correlations with the effective radius, the total B-luminosity, and the flattening (boxy are larger, brighter, and rounder), with the radio luminosity (boxy are radio louder), and with the X-ray luminosity (increasing from disky to boxy).

Most of these correlation have been confirmed by a very large sample of SDSS ETs (Hao et al., MNRAS, 370, 1339, 2006). The authors find also that boxy ETs prefer dense environments, while disky are more isolated. 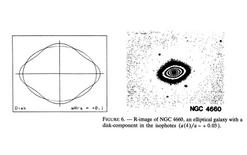 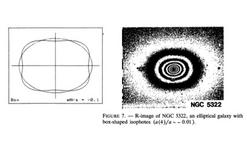 Correlation of a4 with physical parameters of ETs 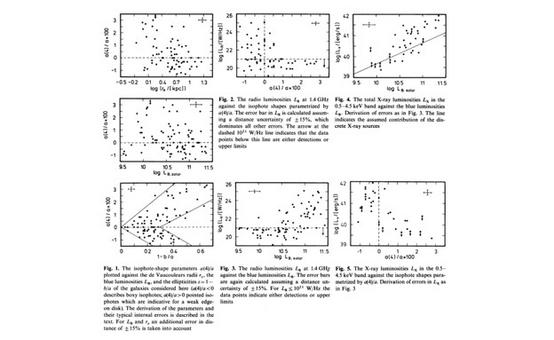 How boxiness and diskiness originate?

Since the discovery, this segregation was interpreted in terms of the effects of dissipative gaseous material in the merging of disk galaxies (spirals).

The picture, however, is not so satisfactory. Numerical simulations of galaxy merging indicate that the product galaxies deviate significantly from a

profile. Also, no correlation is found with the current content of CO gas in ETs Another explanation was searched in the mass differences of the mergers: same mass progenitors originating boxy objects and different (3:1) progenitors originating disky ones (cf. Naab and Burkert, Ap.J., 523, L133, 1999, but also Toomre and Toomre, Ap.J., 178, 623, 1972). Here too there are some problems, since the merging products do not follow easily the correlation with the total luminosity (that is, there are too many bright disky). The basic problem with the merging is that this is a process with too many free parameters: initial masses, intrinsic differences of the merging units, number of events per final product, etc.

Let us see now if photometry alone can tell us something about the intrinsic shape of ETs. Postponing the question of triaxiality, following Richstone (Ap.J., 234, 825, 1979) we consider axisymmetric (oblate/prolate) models of pure

described by a volume emissivity

. The latter is constant on ellipsoidal surfaces:

where the intrinsic flattening

for oblate objects, and

for oblate.
Because of axial symmetry, the galaxy will appear the same along any direction contained in the equatorial plane (x,y), or at any azimuth given a fixed angle (equatorial angle) to that plane. The surface brightness seen from distance along the equatorial plane

which is constant over ellipses with axis ratio q. The view from an equatorial angle

, obtained with some algebra by a rotation about the y-axis remembering that:

which is clearly an elliptical figure with axial ratio

, thus rounder that in the equatorial view.

This means that the galaxy projects into a circular figure with a higher surface brightness if prolate, lower if oblate. This is true, under our assumptions, for one galaxy, but it does not determine the behavior of a large sample if the equatorial surface brightness correlates with the intrinsic flattening. 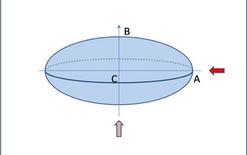 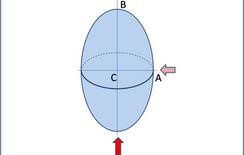 The figure to the right sketches the expectation from an experiment based on a sample of identical oblate and prolate model galaxies with assigned intrinsic flattening, randomly oriented in the sky. Below the scatter diagram built by Richstone (1979) with a sample of cluster ETs selected in a small luminosity range. The ordinate is the surface brightness measured at the effective radius, the abscissa is the apparent flattening at the same radius.

The weak correlation seems to suggest that ETs are preferentially oblate. However the result is far from conclusive [why?] . See also the discussion in Capaccioli et al. (1979, MNRAS, 209, 317, 1984). 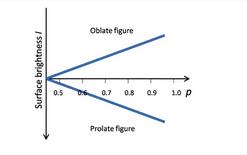 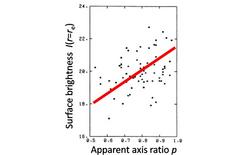 What do we learn from the isophote twisting? Let us tackle this question by showing that a galaxy with ellipsoidal (triaxial) light-density contours with the same centers and orientations of the principal axes, but with varying axis ratios, projects into a figure with elliptical isophotes which are twisted if the galaxy is not seen along one of the principal axes. For the first part of this theorem we follow the paper by Antony Stark (Ap.J., 213, 368, 1977). Consider an absorption-free ellipsoid stellar system in which the volume brightness

is constant on similar ellipsoids. Let

be the coordinate system in which the ellipsoids of constant volume brightness have the form:

be a system concentric to

coincides with the line of sight. The two systems are related by a transformation matrix where

are the first two Euler angles (between

and the line of nodes, and between 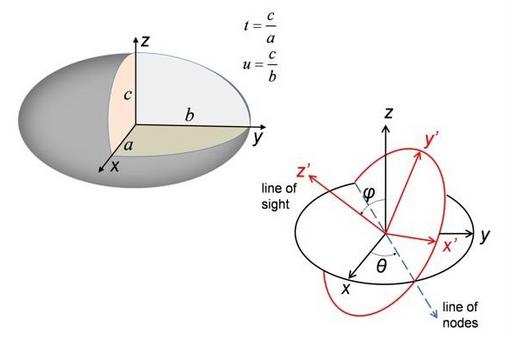 After rotation the equation of the ellipsoid becomes:

In absence of internal absorption, the surface brightness distribution seen by the observer is:

, the point on the line of sight at which

Since the surface brightness depends on

only, curves of equal

on the plane of the sky are isophotes.

Using the definitions of

in the previous slide, and that of

For a particular galaxy, once the observer’s direction is assigned,

In conclusion, we have shown that in a galaxy where the energy density

But what does it happen if we relax the assumption that the spheroids are similar, keeping all the others? The question has been analyzed by Binney (MNRAS, 212, 767, 1985).

Isophotal twisting due to triaxiality

By diagonalizing the 2×2 matrix associated to the quadratic form of the elliptical isophote, we derive the axis ratio:

and the position angle

of the principal axes with respect to the projection into the sky plane of the shortest axis of the ellipsoidal figure:

It is apparent that, if the direction of the line of sight is given (

depends on the axis ratios

only. Thus, if they change with

, unless the line of sight coincides with one on the principal axes of the spheroid.
In this case in fact

no matter what the values of

are. In summary, the twisting of the isophotes of ETs is a strong indication of triaxiality. Other explanations for the phenomenon imply the presence of a dust extinction of several tenths of a magnitude.