The Virial Theorem [recap!] states that a virialized galaxy satisfies (on average) the equation:

is the kinetic energy, and

is the potential energy.

is the total mass, and

are some average radius and squared velocity.

In order to replace with observables the unknown average quantities, we make the following positions:

is the total luminosity,

is an operationally defined surface brightness.

is the same for galaxies with the same photometric trend).

galaxy if radius and surface brightness are those at the effective isophote.

Replacing the above positions in:

By the only assumption of virialization, we have obtained two relations which can be used to gauge distances. In fact, they relate distance independent observable (a surface brightness and a velocity) with other observables which depend on distance (a characteristic radius or the total luminosity[remember that we measure angles rather than distances, and fluxes].

We may attempt to rewrite the relation between luminosity and velocity as:

assuming (to be demonstrated, though) that:

In magnitudes it is:

Note that, if this relation holds for absolute magnitudes

it holds as well for apparent magnitudes

provided that, in the second case, it is applied to galaxies all at the same distance, as it is for objects belonging to the same cluster [but remember the problem of the membership]. In this case, in fact, the distance modulus,

The above considerations show that the relation between luminosity and velocity may be an excellent distance indicator, provided that it is applied to clusters of objects obeying the same relation (same slope and same zero point), in the way shown in the figure. There we have plotted the luminosity-velocity relation for two clusters with distance moduli differing by 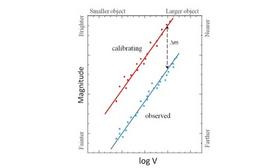 Comparison between the luminosity-velocity relations for two clusters with distance moduli differing by 5m.

The simplest assumptions relative to the luminosity-velocity relations were originally used by the Estonian pioneer astronomer E. Öpik to derive, as early as 1922 (Ap.J., 55, 406), a distance of

In 1977 (AA, 54, 661) B. Tully and R. Fisher applied the relation to Local Group spirals (with known distances and thus absolute luminosities).
To estimate the velocity

(corrected to edge-on view [how?]) and observed that these velocities obey a relation

Comparison with similar measurements for objects of the M81 and M101 groups [remember that galaxies in groups or clusters share about the same distance from the observer] and in the Virgo cluster allowed them to estimate the distances of these systems and the value of the Hubble constant.
They found 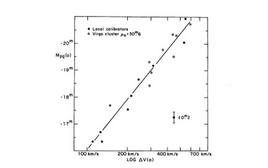 TF relation for calibrating LG galaxies and 8 Virgo spirals, shifted in luminosity to fit the trend of the calibrators.

Let us consider the simplest form for the Tully-Fisher relation (TFR):

Here the subscript to the absolute magnitude  M reminds us the dependence on the observing band. The relation applies well to spiral galaxies. As we said,

(from “width”, since the first measurements were integrated HI line widths) is a kinematical estimator representing the velocity

. Since Doppler effect measures only the radial component of the velocity,

must be corrected for the inclination

of the galaxy main plane to the line of sight. Other corrections [which?] are in order for the photometric measurements. Clearly, both

depend on the adopted photometric band. It is found that the slope increases with the wavelength while the dispersion decreases. Also, we may speculate (correctly) that

depends on the morphological class (indeed S0s and early spirals have a smaller slope of the TFR than later types [guess why]). The most intriguing question is whether it epends from redshift (that is, on look-back time). It is so: galaxies at

are 1.5 mag brighter that objects with the same morphology and the same

. This observation shows that the TFR can be used to gauge distances or to test cosmic evolution.

At the RHS the modern TF relation for 5 galaxy clusters, all reduced at the same distance. 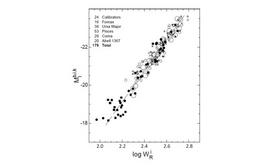 ) as they are early-type galaxies:

The validity of this relation was first proved by S. Faber and Jackson (Ap.J., 204, 668, 1976) using the central velocity dispersion. Recent studies on SDSS data have shown that the parameters of the FJ relation depend on the interval of magnitudes considered for the sample: both size and mean value.

The figure shows the FJ relation for a sample of elliptical galaxies and bulges of spirals covering a large range in luminosity. 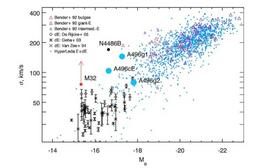 Dressler et al. (1987, Ap.J., 313, 42), self-nicknamed the “Seven Samurai”, used a modified version of the FJR to derive a powerful distance indicator for elliptical galaxies, which allowed them to estimate in 150 to 350 km/s the infall velocity of the Local Group towards the Virgo Cluster.

To this end they defined a new photometric parameter

. In particular, for the blue band they adopted:

The reason is that, for nearby galaxies, the value corresponds to apertures large enough to absorb seeing blurring and off-centering errors [expand], situated within a range rich of photoelectric aperture photometry (photoelectrical fluxes measured through centered circular diagrams). With this choice

is calculated by interpolation.

The Seven Samurai showed that 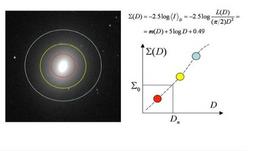 Let us reconsider the relation:

is a constant. For ellipticals (and bulges of spirals), using the central velocity dispersion

, and the average surface brightness within 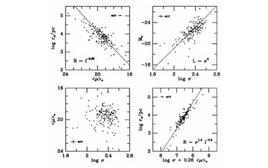 That is, if E galaxies obey the prescriptions of the model, i.e. they are in Virial equilibrium, they form an homologous photometric family, e.g. they all follow

is a regular function of

, and if the mean value of the mass-to-light ratio does not vary from galaxy to galaxy, the effective radius, the mean effective surface brightness, and the central velocity dispersion define a surface, which we shall call Fundamental Plane (Djorgovski and Davis, 1987).

The Tilt of the Fundamental Plane

within a small dispersion. The exponents, however, differ from those predicted by the theory. The departure is called “tilt“. The theoretical prediction is completely rescued if one assumes that the mass-to-light ratio varies with the total luminosity as:

, as one can easily verify by simply substituting this expression into the relation:

It is apparent that the Faber-Jackson relation is just the projection of the Fundamental plane onto the dynamical versus the photometric axes. The other projection, onto the

plane, that we have already seen, is not as straight, having a different behavior for normal and bright galaxies.

Is the Fundamental Plane really fundamental? The question is still open.

Since, as we saw, the dependence on

is weak, this transformation sets the Fundamental Plane almost perpendicular to the 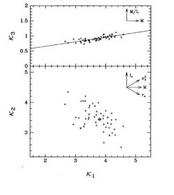