Topic of this lecture: equilibrium configuration in the ISM systems.

The ISM is very far from thermal equilibrium. This fact makes the study of the physics of interstellar systems a challenging work.

However: we can find other types of equilibria in the ISM.

Let us start from considering the kinetic equilibrium.

The Maxwell distribution of velocities reads:

is the reduced mass of the particles.

Maxwellian distribution of velocities is typical of an ideal gas at equilibrium, with kinetic temperature

.
In an ideal gas, all collisions are elastics.

As in the ISM most collisions in the ISM are elastic, we expect that the particle velocities will follow a Maxwellian distribution.

Therefore, a system in the ISM with a Maxwellian distribution of the velocities is said to be at the kinetic equilibrium. 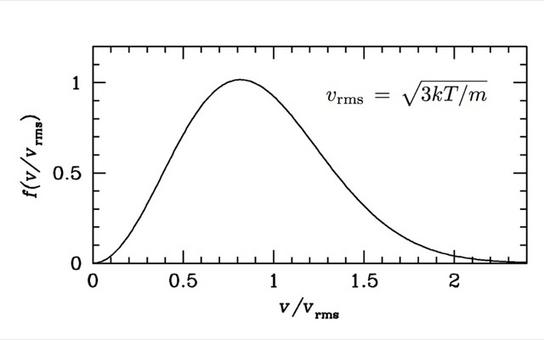 The Maxwell distribution of velocities in a system at kinetic equilibrium.

Kinetic equilibrium in the ISM

How long does it take for a system in the ISM to reach such a configuration?

Timescale for elastic collision between electrons:

Which timescale determines the rapidity in reaching the kinetic equilibrium? How they compare with other time scale?

Consider a gas locally at the thermodynamical equilibrium (LTE).

is the relative populations within an atom or molecule;

is the statistical weight of the given energetic level, and

is the kinetic temperature of the system.

The population of a level is referred with respect to the ground state:

The sum over all the states is related to the Partition Function of the system,

However, we already know very well that systems are far away from LTE.
So, how does this apply to the ISM?

How can we determine the absolute values of the level populations,

First it is possible to determine the so-called “departure coefficients”.

The departure coefficients are defined as:

These parameters measure the “departure” of the true level population from the local thermodynamical equilibrium predicted by the Boltzamn equation.

So, they can be used to determine the ratio of absolute populations:

A second method: the Excitation Temperature,

The ratio of the true populations in two levels is given by:

Relation between the two different definition of temperature.

So, what is the meaning of the excitation temperature?

In very hot plasma (where

At equilibrium: average number density of ionized elements does not change in time:

is the relative velocity between the ion and the electron.

Recombination cross-section is proportional to

with the recombination rate

and the radiation field term

Where do the electrons come from?

Sources of electron in HII and HI regions.

In HII regions: dominant source of electrons is ionized hydrogen.
Hydrogen is ionized by photons more energetic than 13.6 eV. A smaller contribution comes from Helium photoionization.

In HI regions: the spectrum of the radiation field is almost null above 13.6.
Only species with ionization potential below 13.6 eV can be photo-ionized.

The primary sources of electron: surface of dust grains.

Other mechanisms in the neutral regions are provided by cosmic rays and diffuse X-rays from the hot components of the ISM (that is ,

): they can ionize hydrogen deep inside the HI region, where UV photons cannot penetrate.

Sources of electrons: dust versus gas.

The ratio of dust to gas is approximatively 1:100. However, dust is indeed the dominant source of electrons in the ISM, by even a factor 100.

Let us consider a system with no dust. The lower limit on the fractional ionization

in the neutral regions HI is given by the relative abundances of C and H:

Most electrons come from photo-ejection from dust grains.
Dust grains play an important role in almost all phases of the ISM.

A simple model of the ISM: cold an dense interstellar clouds embedded in a warm, ionized, low density medium.

How this coexistence could be possible?
A description in terms of pressure balance between the two components.

When thermal pressure is dominant:

Other sources of pressure need to be considered.

Cosmic ray pressure: protons with energies of a few MeV.

for the warm ionized medium 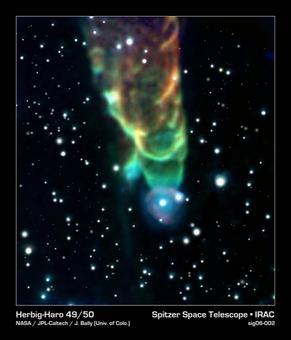 A spiral outflow from a forming star shaped by its magnetic field. Credit: NASA Spitzer Telescope.

B.T. Draine "Physics of the Interstellar and Intergalactic Medium", Chapter 3.

A.G.G.M. Tielens “The Physics and Chemistry of the Interstellar Medium”, Chapter 2.