The diffuse “warm ionized medium” (WIM): about 90% of ionized hydrogen (HII), in a warm and diffuse phase.

emission in our Galaxy.

Solution: H I clouds cannot be spread evenly throughout the galaxy; large portions of the galaxy must have been cleared of H I.

Observational tools for the WIM

2) the dispersion of radio pulses of pulsars

Electromagnetic waves from pulsars interact with the free electrons in the WIM.

Consequence: time dispersion of the pulse. 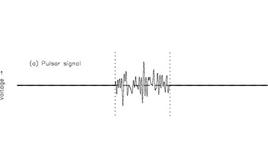 Index of refraction of the ISM:

At high frequency in the pulse (

) is negligiable. Time for a pulse of frequency

to arrive from a pulsar at a distance

For the non-negligiable case, we can Taylor expand the term

The time delay between the phase and group velocities is:

.
The change in time delay with frequency is:

The dispersion measure used to determine the mean electron density in the ISM.

First, we obtain the electron column density to the Crab pulsar:

Distance of the Crab Nebula:

H-alpha Emission from the WIM

Weak H-alpha emission from the WIM.

Intensity of emission from

is the effective recombination coefficient, at

Using the opacity for ionized hydrogen, the optical depth is:

Constant source temperature: then only the density changes along the line of sight.

is then proportional to

EM is the amount of emission and absorption along the line of site.

Particles approach each other along the line of site.

Recombination line strengths are proportional to the emission measure.

Measuring both the emission measure and the temperature of the region can be determined.

In the Milky Way: 90% of the ionized gas is in fully ionized, diffuse form.

ISM around a hot star

What happens to the nearby ISM under the action of their strong UV radiation?

emits about 1/3 of its radiation in photons
with energy higher than 13.6 eV

eV is the ionization threshold of the hydrogen atom.

These photons can ionize a substantial fraction of the surrounding ISM. 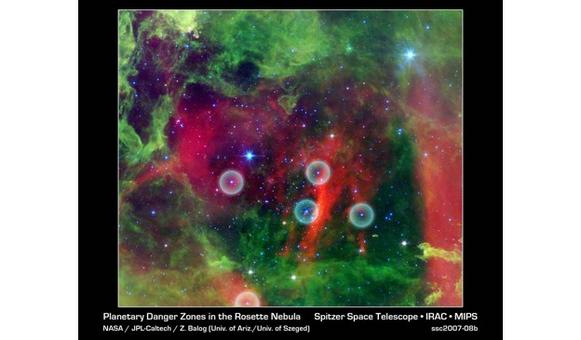 Exercise 2: Compute the same quantity for the Sun.

Exercise 3: The peak emission measure in M42 is

Approximate the nebula as a sphere with radius 0.3 pc. Compute the rate of H recombinations in the nebula. Assume a gas temperature

Exercise 4: The mass distribution of GMCs in the Galaxy is given by

The number of photons emitted in over all solid angles per unit time per unit area at the surface of the star:

The number of photons emitted by a star (per unit time) :

In the range of interest, we have:

Apptoximation of the black body curve with the the Weins approximation:

Change of variables and integration by parts:

The definite integral yields the result:

How many ionizing UV photons does the Sun emit?

Answer only depends on temperature and radius of the star.
The production rate for a Sun-like star is smaller by the following quantity:

Definition of the Stromgren Sphere.

Within Stromgren Sphere: ionization is maintained by absorption of ionizing photons radiated by a central hot star.

In a steady state, hydrogen recombination is balanced by photoionization.

: rate of emission of hydrogen-ionizing photons.

Equating the rates of photoionization and radiative recombination, gives the steady state condition for ionization balance:

where we used the recombination coefficient

.
We assume that the hydrogen density be

B. T. Draine, “Physics of the interstellar and intergalactic medium,” Chapter 15

A tutorial on radio pulsars