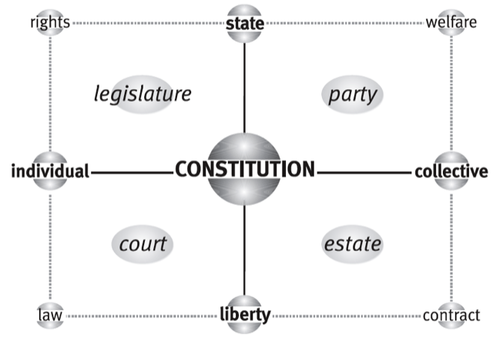 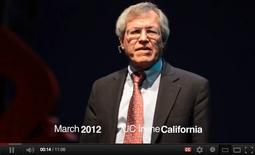 Erwin Chemerinsky, University of California, on "The Living Constitution"

«from England to Hungary, from Spain to Poland and Sweden, we find charters, resembling Magna Carta, which provide for restraints upon the princes and division of governmental power between several states, i-e. groups or classes, in the community» (Friedrich 1950, p. 129). 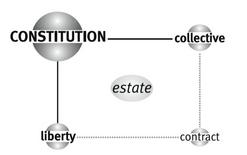 Il quadrante in basso a destra

Questa posizione sembra recepire la lezione inglese per la quale «a working constitution results only from a painstaking process of judicial interpretation and enforcement of individual rights. This be also an aswer to the often quoted paradox that the motherland of constitutionalism never had a constitution as a unified body» (Calise e Lowi 2010, p. 85). 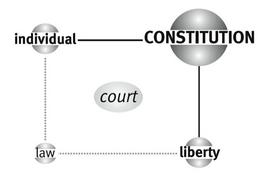 Il quadrante in basso a sinistra

Il quadrante in alto a sinistra 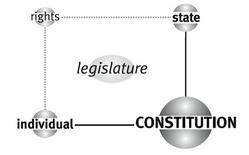 il quadrante in alto a sinistra 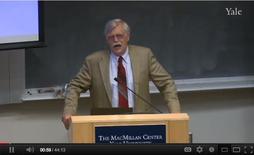 The Division of Powers- Montesquieu, Yale 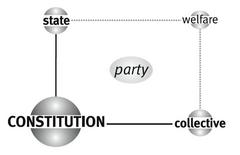 Il quadrante in alto a sinistra

«These are no mere cross-references, as there are in most dictionaries by use of the generic see also annotation. Thanks to the use of the matrixs logical pattern and interface as a common framework for all definitions, links in our hyperdictionary always refer to a specific quadrant, with all other keywords in that quadrant contributing to clarification of contexts, and in which set of relationships partyis being used in a given matrix» (Calise e Lowi 2010, p. 18). 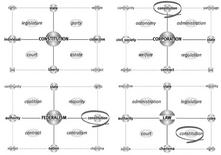 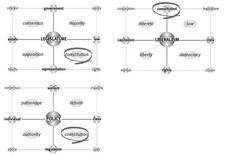 «At first, the tension between these two poles mainly concerned political liberties, as corporations needed sound statutory footing to be able to enjoy all privileges of their quasi-public status. This inevitably implied a conflictual relationship with the state as the ultimate constitutional authority. [...] With the advent of the modern business corporation, the tension between contract and constitution turned into an economic one. During the past two centuries, corporations repeatedly moved from one pole to the other, depending on which one would provide the greatest and/or most stable benefits. At first, the granting of a public statute, or charter of incorporation, was a prerequisite for corporate development. Thanks to the public authority delegated through statute charters, corporations enjoyed a privileged access to the most relevant sectors of American life. Then, as corporations consolidated their economic power, it became all the more important to place corporate privileges under the protection of contract law (Horwitz 1977).?» (Calise e Lowi 2010, p.92) 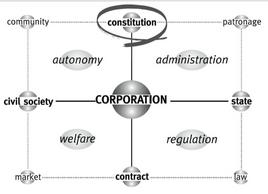 Nella matrice di Federalism, il concetto di Constitution contribuisce invece a specificare «the level of formality in the relationship among components of a federal union, ranging from a highly institutionalized set of constitutional requirements to the minimal recognition of a higher power, or authority, to keep the units together?» (Calise e Lowi 2010, p.104). 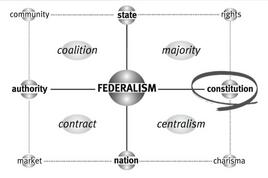 Nella matrice di Law, il concetto di Constitution definisce la legge costituzionale, «no longer a mere compilation (and possibly codification) of existing law, but is a higher law that allocates and distributes state power among existing (or new) institutions and also sets standards for the formal properties which a law must possess in order to be valid (Hayek 1973, 135)» (Calise e Lowi 2010, p.126).

«In effect, a constitution, properly understood in this quadrant, is higher law in two respects. First, it is higher law because its rules cannot be changed except by an extraordinary decision process far beyond the convenience of the powerful: e.g., a two-thirds rule, a long judicial review procedure, a massive referendum process, a multiple year multiple passage by the legislature. Second, it is higher law because it is law of laws, law about laws, law about the limits of laws (Kelsen 1992). Some constitutions embody ordinary laws, i.e., actual rules of conduct. The constitutions of the American states are filled with examples of ordinary law; they can be as long as two hundred pages. But these practices should not muddy the distinction between constitutional law and legislative or administrative law?» (Calise e Lowi 2010, p.126). 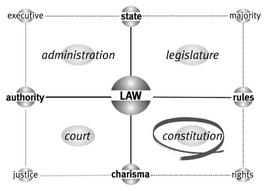 «the best case study in this quadrant is the United States during the entire nineteenth century and a good part of the twentieth. The U.S. Constitution created a regime of a mixed separation of powers, in which all the powers of the national government (the state) were assigned in Article I to Congress. It was the First Branch, coming first in Article I but also intended to be the superior branch, superior in power» (Calise e Lowi 2010, p.132). 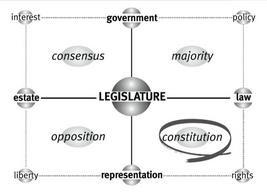 «Almost every political dictionary definition of liberalism includes reference to limited  government. But how is it to be limited? Limitations on conduct can be built into the system, as in a constitution, above and almost entirely beyond the convenience or discretion of the players. Although the constitutional principle of separation and division of powers is older than Montesquieu, his writing helped guide the construction of institutions with limitations on power along these lines. Constitution thus refers to a variety of formal arrangements through which the individual is brought into play within these separated institutions, set against each other as Newtonian constraints on power, known in the United States as checks and balances and, in other formulations, as mixed government and mixed regimes (Friedrich 1968 [1950], chapter 10). The rise of liberalism as a political creed in the wake of the French and American revolutions was marked by the attempt to establish constitutional charters in all monarchical absolutist regimes» (Calise e Lowi 2010, p.140). 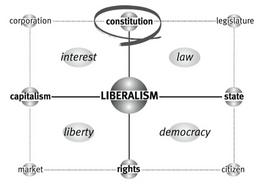 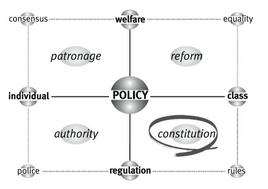