Legislators never offer a clear definition of the concept of enterprise group.
Gaps in legislation have to be interpreted and compensated for by administrative policy, in line with existing regulations.

The literature identifies specific features common to all:
1. Include a number of legally separate companies;
2. Structure is that of a corporation;
3.1. Controlled through shareholders;
3.2. Controlled through other means like contracts, statutes or personal ties.

When one company exercises control over the other entities in the group, it implies a single economic subject; either those whose interests the company safeguards (i.e. the owners) or those who decide company policy (the management).

In short, groups have unified financial management and revenue autonomy.

The concept of legal control varies from country to country.
In the United States this means owning the majority of shares (+ than 50%) and having more than half the voting power.
In the United Kingdom it means owning more than 50% of net assets.
Financial control (which is very common in Germany) implies a different approach, as it has nothing to do with shares but with the contractual, statutory and governance relationship between the different entities.

The introduction of the Seventh Directive spelt a compromise between the Anglo-American and German approach, as it stipulates that legal control is the priority but accepts the idea of financial control.

The legislative decree 127/1991 states that companies have to present a consolidated financial statement when:
1. The relationship between holding company and subsidiaries is one of control;
2. The parent company is:
- A corporation;
- A public body involved in for-profit business, a cooperative or mutual insurance company as long as they control one or more corporations.
Companies exempt from presenting a consolidated financial statement are therefore partnerships, associations and foundations, individual entrepreneurs and consortiums, even if they control limited companies.

IAS 27 states that every company that exercises sole or joint control over one or more subsidiaries needs to present information about all entities within the group regardless of their legal status.
This can be wavered if the parent itself is a wholly or partially-owned subsidiary of another entity. 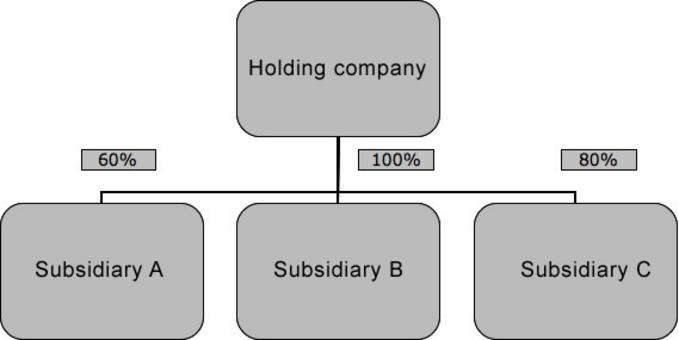