IAS are mandatory for the consolidated financial statements of all the listed companies in the EU for annual periods beginning on 01.01.2005, i.e. from 01.01.2004 for comparative data.

Member states decide whether to impose or allow IFRS for company balance sheets and for unlisted companies.

That option was implemented in Italy with the Legislative Decree of 28 February 2005 n. 38.

Companies and their obligations Legislative decree 38/2005

Listed companies for balance sheets since 2006 (option for 2005)

-have shareholders other than the controlling shareholders, numbering more than 200, and holding a total stake of at least 5%;

cannot prepare the financial statements in abbreviated form, in accordance with art. 2435-bis of the Civil Code

- have a number of bondholders exceeding 200.

- insurance companies (only for the consolidated statement).

Companies that are “authorised” but not obliged

The application of the principles is optional and never mandatory. This ability to draw consolidated financial statements began in 2005.

Companies that can submit an abbreviated version of the balance sheet in accordance with art. 2435-bis of the Civil Code, i.e. companies that, for two consecutive years, don’t exceed the following three limits: 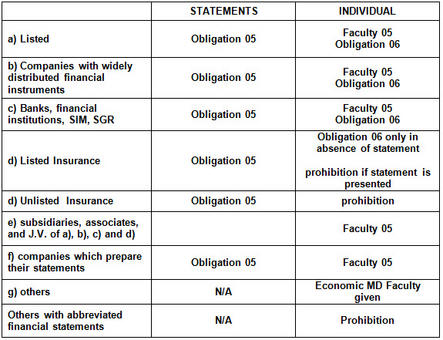 If the reference date for the first IAS / IFRS is December 31, 2005 and you opt for the presentation of comparative information for one year only, the result is that the date of transition to IFRS coincides with January 1, 2004, or with 31 December 2003 (which is the same thing).

Preparation for transition to IAS/IFRS (cont.)

You need to submit a first-time adoption balance sheet with a reference date for the transition to IAS/IFRS. The assets and liabilities are those recognised by the IAS principles. The effect of the adjustments made to the opening balances of the various asset and liability accounts to make them consistent with IAS/IFRS principles has been recognised in a FTA first time application equity reserve.

We look at the caso Fiat to illustrate the transition to IAS IFRS.