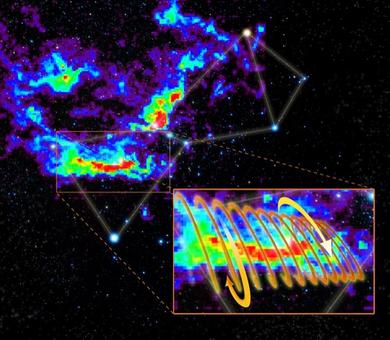 The Orion Molecular Cloud in the Orion constellation. The inset shows the coils of the helical magnetic field surrounding the filamentary cloud. Credit: NRAO.

In the last lecture we have discuss the different physical contributions to the pressure in the ISM.

We express those pressures in terms of the energy density,

The six main sources of energy in the ISM are:

Energy densities in the local ISM

We compare here the typical values of the main source of energy densities in the local ISM.

Note: all these contributions are comparable, within one order of magnitude.

A note on the energy densities

The other energy densities are coupled.

The magnetic energy are built up by ﬂuid motions.

What if the cosmic ray energy density were much larger?

Starlight energy and the gas.

Energy balance of the ISM 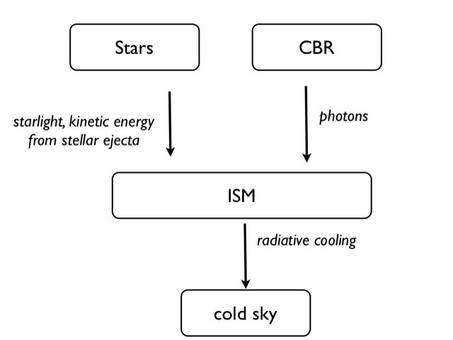 Energy balance in the ISM. The ISM is far from thermodynamic equilibrium.

The dominant heating source is given by the photoelectrons ejected from dust grains.

UV radiation can free electrons out of small dust grains and large molecules, like the Polycyclic Aromatic Hydrocarbons (PAH).

Photons responsible for this mechanism are in the FUV region of the spectrum, below 13.6 eV.

is the heating efficiency,

the mean intensity of the interstellar ration field.

Heating efficiency: at most about 0.05.

This value is higher than any other heating mechanisms in large parts of the ISM.

The ISM is pervaded by cosmic rays, a population of very energetic nuclei and electrons.

Cosmic rays provide an important heating source for the ISM.

In particular, low energy cosmic rays, such as protons with energy between 1 and 10 MeV, heat the the ISM by means of ionizing collisions:

Ejected electrons have mean energy of about 35 eV.
The electrons can quickly thermalize, via electron-electron collisions.

Secondary ionization of H and He. 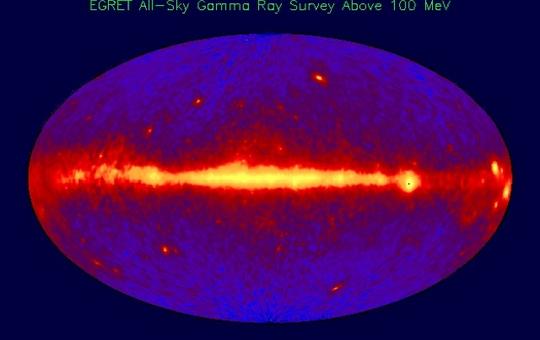 The all-sky gamma-ray map above 100 MeV obtained by the instrument EGRET, on board of the Compton Gamma Ray Observatory satellite. Credit: NASA.

Photoionization is the third relevant heating process in the ISM.

Ionizing photons are FUV photons (mostly provided by hot stars) generally with energy between 11 and 13.6 eV

The ionizing mechanism can be written as:

The electron mean energy is given by the difference of the ionizing photon energy and ionization potentials of the species, and of the order of a few eV.

Ionization states in the ISM and IGM

The gas ionization in the ISM and also the IGM.

In dense molecular clouds, the material is almost entirely neutral, with

HI regions. elements such as C are photo-ionized by starlight, and the hydrogen is partially ionized by cosmic rays, with resulting ionization fractions in the range

in the IGM, the hydrogen and helium may be mostly ionized (H II, He III), with C triply ionized (C IV).

Supernova remnants. Elements up through carbon may be fully ionized. Oxygen or neon may retain only electrons in the innermost atomic shell. 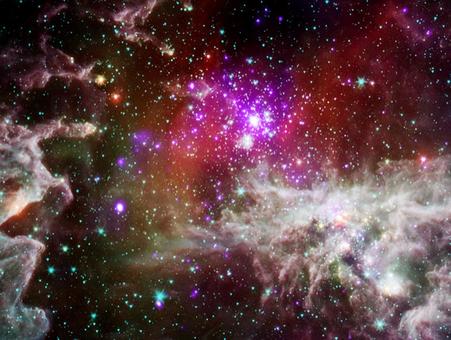 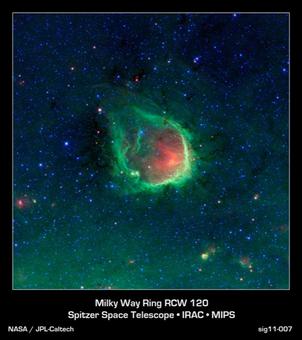 The system RCW 120, observed by the Spitzer Space Telescope in the infrared. Credit: NASA.

Most important heating mechanism in the ISM.

).
The most important processes is the photoelectric heating, at all the densities.

).
Heating from dust grain is dominant when the density is larger than

).
FUV radiation cannot penetrate, thus photoionization is negligible.
Many heating processes are active here, mainly related to gas dynamics, but cosmic ray heating is surely the dominant process, by an order of magnitude.

B.T. Draine "Physics of the Interstellar and Intergalactic Medium", Chapter 3.

A.G.G.M. Tielens “The Physics and Chemistry of the Interstellar Medium”, Chapter 3 on “Gas heating”.