Giovanni Covone » 2.A census of systems in the Interstellar Medium

What is the ISM

What is the ISM made of: a census of physical systems in the interstellar space.

We will study the physical composition of the ISM and their interaction with stars.

The interstellar medium plays a central role in the evolution of the galaxies: formation of new stars occur in dense molecular clouds, enriched by previous generation of stars; stars (mostly, the most massive and the evolved ones) diffuse intense stellar winds in the surrounding environment; massive stars end their life as supernovae, injecting large amount of matter and energy in the galaxy.

Hence, the abundance of heavy elements in the interstellar medium steadily increases (chemical “enrichment” or “pollution”).

A census of objects in the ISM

In this lecture we will make a detailed census of the structures observed in the ISM and a list of its physical components.

Aim of this lecture: an introduction to the observational properties of the most notable structures in the ISM.

The census of interstellar objects include:

We will then classify these structures according to the physical parameters.

Typical parameters in the ISM

Typical density of the Earth’s atmosphere

Vacuum in our laboratories,

Average value in the ISM within the Milky Way,

atoms per per cm3.

In hot and less dense regions,

atoms per per cm3.

As a result of primordial nucleosynthesis, by number of nuclei the gas is roughly 89% H, 9% He and 2% elements heavier than H or He, with additional heavier elements (“metals” in astronomical parlance) present in trace amounts

Pressure on Earth and in Space

Typical values for the pressure in different physical situations, on Earh and in Space.

Chemical elements in the ISM 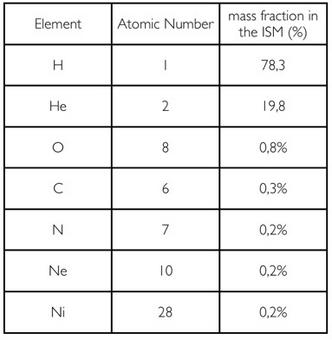 The table shows the chemical composition in mass fraction of the ISM. 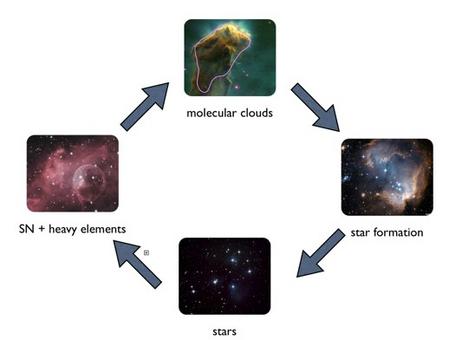 Schematic view of the link between evolution of stars and processes in the interstellar medium.

Let’s start from a remarkable example of complex system in the ISM: the Carina Nebula

The Carina Nebula is a real maelstrom of star birth and death. Next image shows the Carina Nebula assembled from 48 frames taken with Hubble’s Advanced Camera for Surveys.
Images were taken in the light of neutral hydrogen.

Color information was added with data taken at the Cerro Tololo Inter-American Observatory in Chile. In the image, red corresponds to sulfur, green to hydrogen, and blue to oxygen emission.

Question: what are the wavelengths at which the mentioned elements are observed? 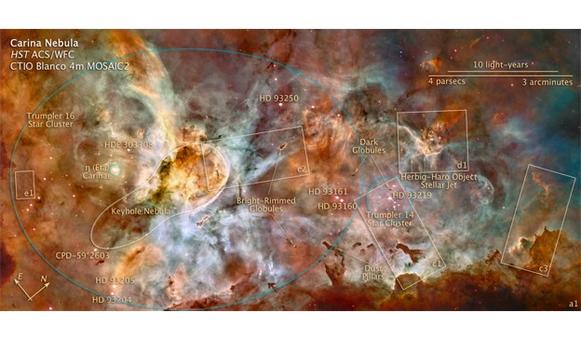 HST mosaic of the complex structure of the Carina Nebula. Also known as the Eta Carina Nebula, or NGC 3372, it is a large bright nebula that surrounds several open clusters of stars.

Molecular clouds are among the largest and densest structures in the ISM.

Detection via emission of CO molecules.

Ratio between the CO and 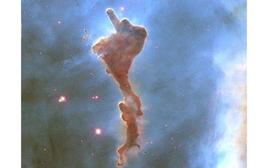 The Molecular Cloud Complex in Orion 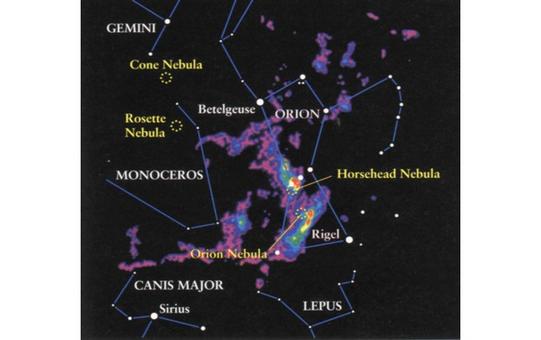 The spatial distribution of the Orion Molecular Cloud Complex, as observed via its CO emission.

Definition: a region where hydrogen is mostly ionized. 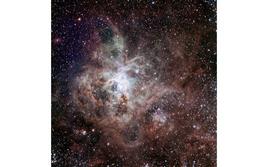 Optical spectra provide tools to study of the HII region.

Spectrum is dominated by are recombination lines of hydrogen, helium and the so-called “forbidden” emission lines.

Why “forbidden”?
These transitions happen in physical conditions usually not met on Earth, therefore those lines are not observed in our laboratories.

In the picture: an emission line spectrum of a compact HII region in the Virgo intracluster field. Emission lines from oxygen ([OIII]) and hydrogen atoms, and ionized sulphur ([SII], [SIII]) are identified. 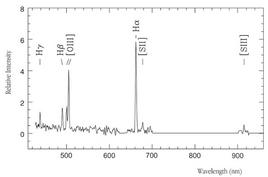 Typical spectrum of an HII region, where most of the flux in emitted in emission lines. Credit: ESO.

They dominate the optical spectrum and the colors of starburts and moderately star-forming galaxies.

Most distant objects known in the Universe are starburst galaxies, with spectra typical of HII regions.

In the picture, a portion of the galaxy Messier 83, in a color image. HII regions emit strong H-alpha lines, and appear red in this image. 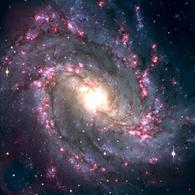 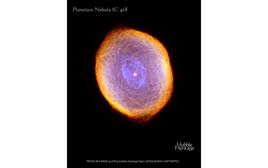 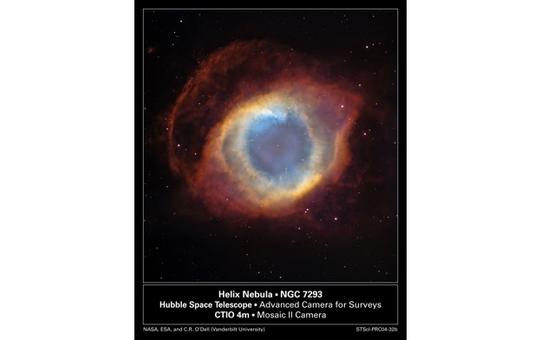 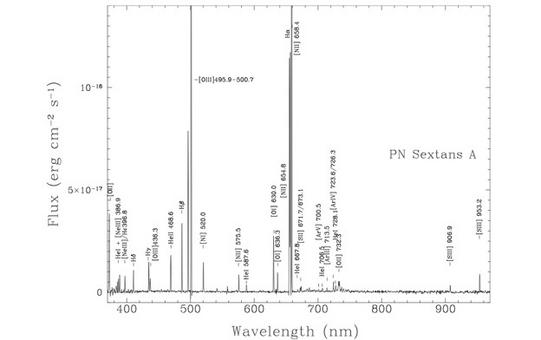 Chapter 1 of the book “The Physics and Chemistry of the Interstellar Medium“ by A.G.G.M. Tielens

Gallery of spectra of Planetary Nebulae