. Assuming the invertibility of volume and pressure, for the total volume of the system,

Hence, for an infinitesimal change in state we have:

or, in a more compact form:

We give now the following definition of partial molar volume as:

This definition can be extended to the general case of any extensive property (i.e.

). Hence, we have for a generic extensive property:

where, by definition, the partial molar property

We look now at the consequences of such definition. Consider a process at constant T and p, where our system is formed by adding n1 moles of component 1, ……, nc moles of component c until reaching a final state consisting of a homogeneous mixture of all the components. At each step of this process we have that:

If we add the differential amounts of the components at the same time, in such a way that the composition of the mixture is always the same during the process , we have:

In general we than have that:

From eq. (3) we conclude that the total value of an extensive property is the weighed sum of the partial molar properties of each component of the mixture. This result derives from the fact that extensive properties are homogeneous functions of 1st degree of the number of moles (see the following note).

Note on derivation of eq. (3)
If we consider a generic thermodynamic property,

, in the hypothesis that there are no phase changes, we have:

is a homogeneous function of 1st degree of

. We analyse now the mathematical consequences of this result. In fact, if we expand in a Taylor series the left hand side of the previous equation around

Now, if we subtract from both sides of eq. (5) we obtain:

By taking the limit for

We can take now the differential of eq. (3), obtaining:

We, then, conclude that, at constant T and p:

This is the GIBBS-DUHEM relationship from which we realize that the partial molar properties are not all independent. In particular, for a binary system, the Gibbs-Duhem relationship provides the basis for computing the values of partial molar properties (p.m.p) for one component when values for the other components have been already determined (Gibbs-Duhem integration).

Note on derivation of eq. (8)
If we consider now two mixtures, at the same T and P, such that:

in such a way we have not used the property of

of being an homogeneous function of order 1 of the number of moles.
In fact, if we instead calculate

which has been derived by considering that {\Phi}_{t} is a homogeneous function of order 1, we obtain:

Which is the Gibbs-Duhem relationship. Eq. (c) is a property only of the homogeneous function of order 1 of the number of moles. It states that when we change a little the composition of a mixture, all the partial molar properties change a little as well, but the scalar product of the vector of starting composition by the vector of variation of partial molar properties is zero.

It is worth noting that partial molar properties are homogeneous functions of order zero of the number of moles. As an example, if we consider the chemical potential vector, which is the vector of partial molar Gibbs Free Energy, we have:

(which has been obtained by taking

Temperature, pressure , volume and, according to the 3rd law, entropy all have absolute values in thermodynamics. In contrast, there is no universally valid state for a system for which any of the energy functions (i.e. Ut, Gt, Ht, At) have a zero value. In fact they are always evaluated with respect to some reference state. Problems involving these functions, in general, deal only with changes in these values for processes. We consider here, in particular, the mixing process.

REFERENCE STATE for the formation of a solution: imagine to have containers with the single components in the physical state which is stable at the temperature and pressure of the solution to be formed.
MIXING PROCESS: it is the change in state experienced by the system when appropriate amounts of pure components in their reference state are mixed forming a homogeneous solution brought to the same temperature and pressure as the initial state. It is the formation of a solution from pure components at constant T and p.

Focusing always on uniform systems, we define with the symbol

the molar property of a pure component in a uniform state (i.e. all the thermodynamic properties have the same value all over the space occupied by the body). ‘0′ stands for ‘reference state’. We have:

From which we conclude that:

it measures the change experienced by 1 mol of component k when it is transferred from its reference state to the surrounding environment it experiences in the solution at the selected composition. Consequently, form eq. (9) we obtain:

From this expression (11), it is evident that

is the weighed sum of the changes experienced in the mixing process by the individual components. Now, from eq. (9), at constant T and p:

By accounting for Gibbs-Duhem relationship and since ’s are independent of composition, expression (12) becomes: 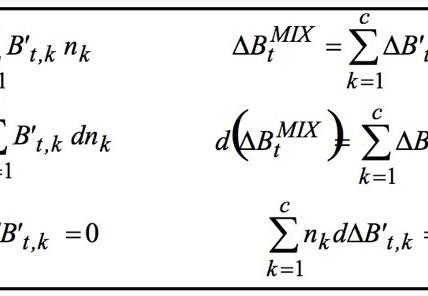 At constant T and p we have: 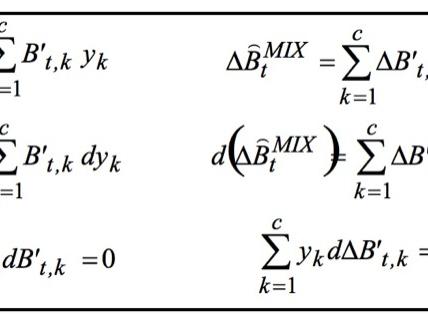 Molar values of the properties of mixing can be easily obtained from the previous results by dividing the expressions by the total number of moles, i.e. nt.