Although cattle have never been selected for their muscle performance, many breeds are kept for meat production. This has led to the selection of various genetic diseases involving skeletal muscle too.
Diseases affecting muscles can have significant consequences for the cattle-breeding industry.

For more than a century now, breeders have selected breeds of cattle with double musculature without even knowing how they managed to achieve this, nor how their genes worked.
In 1990, after years of research, a group of academics managed to find the gene responsible for increasing muscle mass and making meat less fatty. 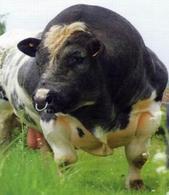 Myostatin is a protein belonging to the TGF-β super family and is a strong negative regulator of muscle growth. Image from: Pepro Tech

In some breeds of cattle (Belgian Blue and Piemontese) a mutation of the Myostatin gene is associated with the “double musculature” phenotype.
Recently Mosher D.S. e coll. (2007) demonstrated a specific mutation in Whippet dogs. 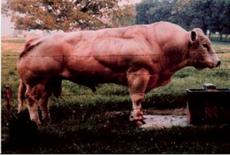 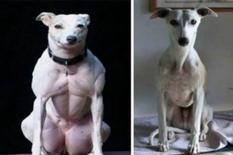 Myostatin limits muscle growth in mammals, including humans. However, if the gene responsible for the production of this protein is altered or suppressed, it results in an increase in muscle growth and a reduction in fat deposits.
Researchers at the Meat Animal Research Center (MARC) in Clay Center, Neb., found that one of the benefits of myostatin inactivation in bovines is the creation of tender meat with fewer unsaturated fats. 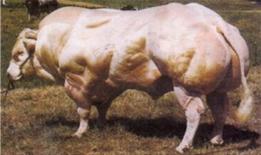 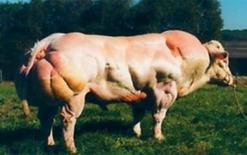 Obviously myostatin manipulation is not without its problems.
Animals with double musculature require assistance during birth and sometimes caesarian section. They may also be less fertile and be more prone to stress. 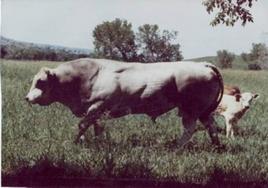 Well-muscled bovine breeds can be crossed with those traditionally used for meat production like Angus or Herefords.
The result may well be animals whose meat contains fewer unsaturated fats. 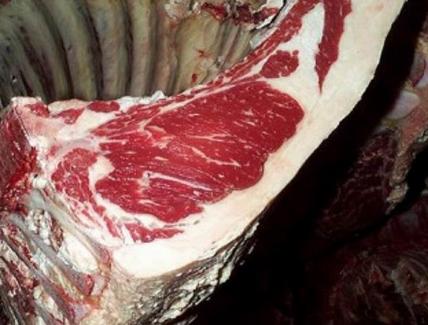 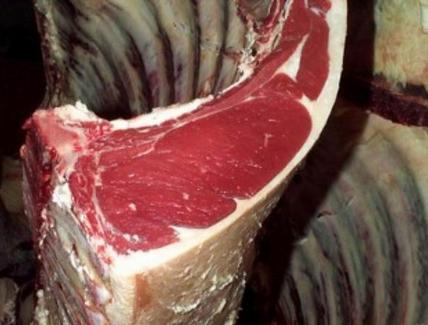 Cow's meat with a copy of the inactive myostatin gene. It contains less fat than the meat above and an average amount of "marbling". Photo from: United State Department of Agricolture 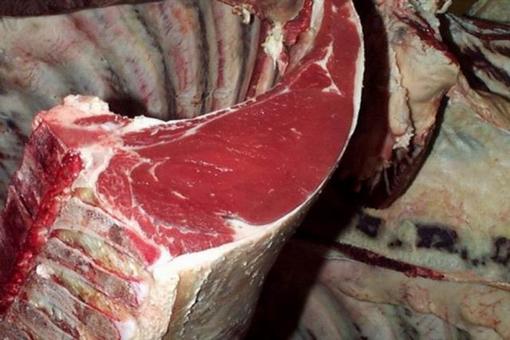 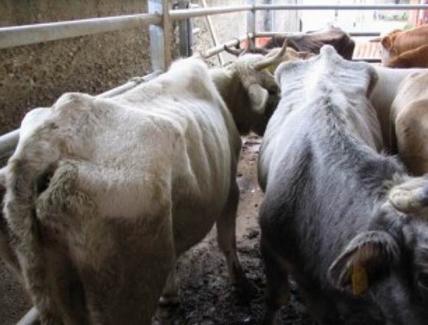 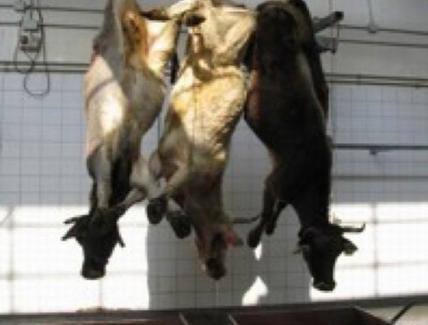 Atrophy of skeletal muscle is something which affects animals after a cachetizing disease, as a result of ageing, disuse (because of denervation, immobilisation or lack of load) or because of numerous other pathologies. Regardless of the trigger, muscle atrophy leads to a reduction in the amount of fibrocellular protein, the diameter of the fibres, the contractile strength and resistance to stress. 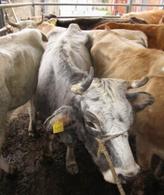 Different types of pathologies associated with muscle atrophy include just as many etiopathogenetic mechnisms, thus implying that many different molecules are involved. While it is well-established that muscle disuse, due to lack of load, means that there is an increase in protein degradation and a marked reduction in protein synthesis, it is not understood to the same extent which molecules are involved in this metabolic process and what their specific action is. 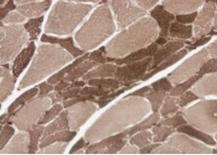 Atrophy due to cachetizing involves different molecular sites which affect the fibres even in disuse atrophy. With the latter problem, however, it is not sure why.

This disease, which is due to Clostridium chauvoei, is extremely important especially from a financial point of view because it is the most common myositis in beef cattle.
The affected muscles, fascia and subcutaneous tissue present with hemorrhages and locally extended edema, often with crepitus due to gas bubbles. The necrotic muscle fibres look dark or black-red. 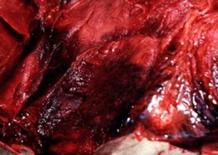 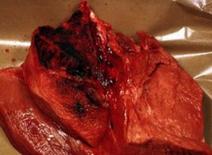 Cattle are prone to developing abscesses caused by pyogenic bacteria, most commonly Arcanobacterium pyogenes. Abscesses in the muscle are most commonly seen in the hind limb. The affected limb presents with pain and swelling because of the widespread necrotising cellulitis and myositis. 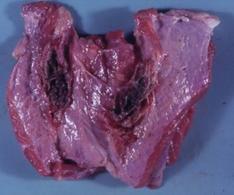 Intracytoplasmic protozoan cysts from Sarcocystis spp. are often found by chance in skeletal and cardiac muscle fibres in cattle.
Massive exposure can cause fever, anorexia and progressive impoverishment, though this is quite rare.
More often, Sarcocystis infection is diagnosed as an incidental finding during necroscopy or during inspection of the meat at the abattoir. 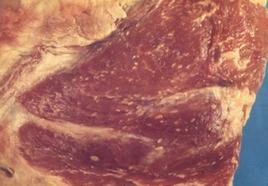 If the cyst wall breaks it results in necrosis of the fibre and an inflammatory reaction with interstitial infiltration of lymphocytes, plasmacytes and oesinophilic granulocytes. 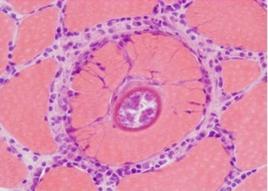 Oesinophilic myositis is a disease affecting cattle which is thought to be a rare result of Sarcocystic infection, due to hypersensitivity on the part of the animal.

Affected muscles appear to be green in colour because of the massive infiltration of oesinophils. It is associated with myofibral necrosis and, in chronic cases, fibrosis 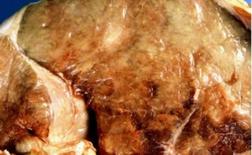 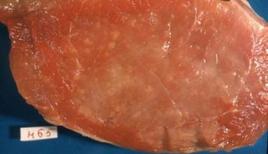 Cattle and young cows are prone to nutritional myopathies due to selenium and (less commonly) vitamin E deficiency.

Muscles in affected cattle range from pale pink to white in appearance and often have irregular distribution.

In the early stages of the disease, the muscles present with yellow and white bands and then later the muscles look completely pale and white, to the extent that the disease is known as “white muscle disease”. 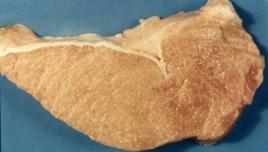 Vitamin E and selenium are important for protecting the animal against lypoperoxidation in the cells by free radicals because it prevents the formation of hydroperoxide acids.
Free radicals are responsible for the peroxidation of lipids and physical-chemical damage of proteins, especially those in the membranes. 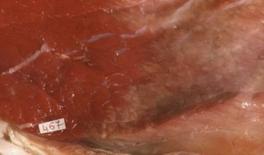 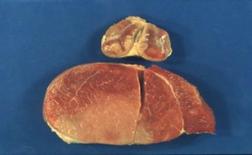 This bovine disease is occasionally discovered on necroscopy or butchering. It is believed to be a defect in muscle development, whereby vast areas of myofibres are replaced by adipocytes. 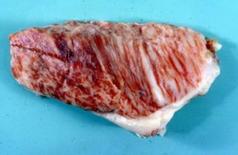 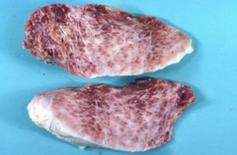 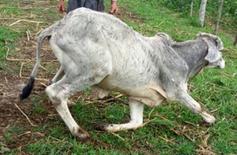 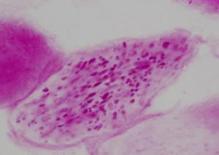 This disease has been identified in the Charolais breed of cattle. It is an autosomal recessive defect with glycogen deposits in the muscle fibres. It is similar to maltase acid defect except that no other organs are involved.   Clinical signs include exercise intolerance and moderately raised CK and AST levels.  . Histologically, glycogen deposits are visible in the muscle fibres with PAS. 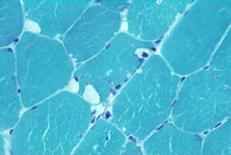 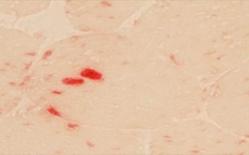 A new congenital myopathy has recently been described in Chianina cattle. It is referred to as Pseudomyotonia. The disease is characterized by muscle contracture during exercise which prevents the animal from engaging in intensive exercise. As soon as the animal tries to move more quickly, the muscles contract. Muscle biopsy reveals necrosis and regeneration with a prevalence of type II fibres.  The phenotype which is observed in cattle is similar to that of a rare genetic disorder in humans known as “Brody disease”. 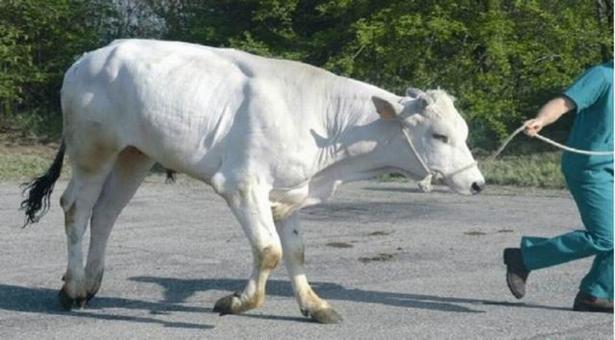