Many hereditary, congenital or neonatal defects can affect muscles.
Hereditary muscle disorders can be seen at birth or soon afterwards, or can appear years later.
Molecular biology and genetic testing have combined to produce better knowledge of many myopathies in animals and have made it possible to identify affected animals or those who are carriers of genetic disease. 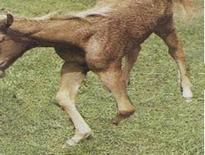 Example of congential arthrogryposis in a calf

Example of congenital arthrogryposis in a calf 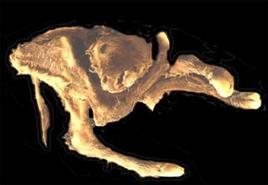 This refers to persistent flexion of a joint because of muscle spasm or retraction, or because of intra and extracapsular ankylosis.
CAR = Congenital articular rigidity which is seen in lambs, calves, foals and piglets falls into the category of malformation of the joints or muscular aplasia or hypoplasia.
It is characterised by stiffness of single or multiple joints (arthrogryposis multiplex congenita), is non-progressive, is caused by alterations to the nervous system and is often associated with skeletal malformation.

Congenital arachnomelia and arthrogryposis in a cow

The muscle groups in the affected joints are hypoplastic, i.e. the muscles are not fully developed and muscle tissue is replaced by adipose and fibrous tissue. In bovines, the disease occurs in different breeds but especially in:

Example of deformed extremities in a calf 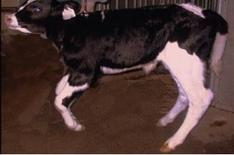 Example of deformed extremities in a calf

The most significant congenital defect in intensively reared swine (pietrain, landrace and large White).
There is congenital myofibrillar hypoplasia which leads to muscle weakness in the hind quarters and less frequently in the front making it difficult for the animal to stand. The limbs are held in abduction, like a sitting down dog with limbs outstretched and splayed. 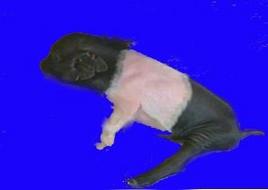 Serious weakness of hind quarters with a "sitting dog" appearance

The etiology of this disease is believed to be multi-factorial. Factors to do with food, toxins or environment probably combine with a hereditary predisposition.

It has been noted that incidence of the disease increases with episodes of PRRS (Porcine reproductive respiratory syndrome). 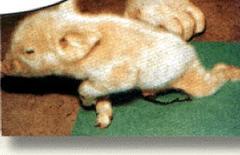 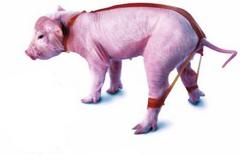 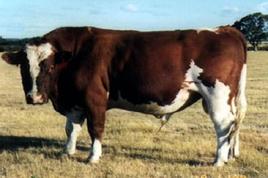 An example of Meuse-Rhine-Yssel cattle breed 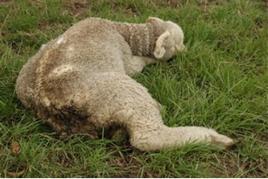 Serious weakness in a sheep

A genetic disease characterized by skeletal deformity in young lambs. It is a recessive hereditary disorder.

This means that any lambs with the disease received a recessive gene from both parents.

This disease is seen mainly in black-faced lambs. 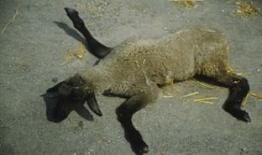 Flexor deformity is a pathologic condition affecting the joints, characterized by deviation in the sagittal plane and persistent hyperflexion in one articular region, resulting in altered biomechanics of the joint.
The most frequent sites for this kind of deformity are:
metacarpal / tarsal phalangeal and carpal joints, and more rarely the distal interphalangeal joints, tarsals or vertebral column. 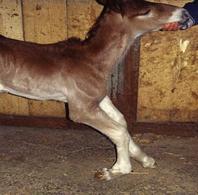 Congenital flexor deformity is believed to be the result of a defective positioning of the fetus in the uterus.

However, various hypotheses have been put forward, including:

In foals, as in children, symptoms like “flexor deformity” and “hypotonia and/or muscle weakness” may be the expression of congenital neuromuscular pathologies. 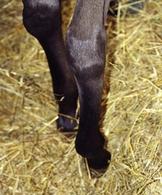 Causes of flexor deformity in children

Congenital myopathies present typical morphological changes which show up on histochemical tests.
They are often associated with a predominance or hypotrophy of type I fibres. 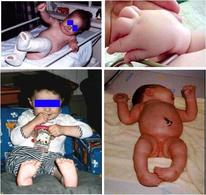 Examples of deformities in the extremities of a baby. This kind of anatomical-clinical picture is very similar to the congenital changes seen in young animals 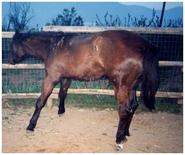 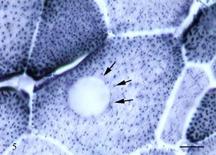 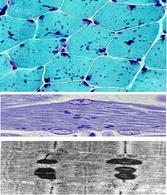 Hypertrophic nuclei in the centre of the muscle fibre. Source: Neuromuscolar

Myotubular myopathy is perhaps the most serious congenital muscle pathology.
Predominant clinical symptoms are serious hypotonia, insufficiency in spontaneous movement, contracture in neck muscles, multiple flexor deformity and cardiac and respiratory insufficiency.
Histologically the myofibres sometimes appear undifferentiated and similar to those of muscle fibres at the fetal stage.
A transparent halo can be seen around the nuclei, which demonstrates intense oxidative enzyme activity. 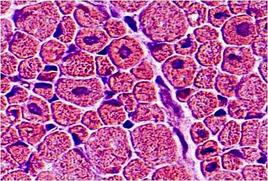 A protein accumulation myopathy, which is indicative of a defect in protein catabolism.
Areas of desmina deposits show a lack of oxidative and ATPase activity. The amorphous material can form spheroid aggregates or widespread filaments within the sarcoplasm.
New-borns present with generalized muscle-weakness and cardiomyopathies as well as flexor deformity. 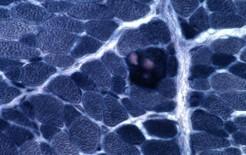 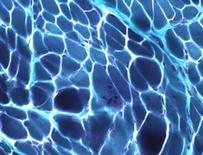 Pathology present at birth, characterized by a prevalence (> 12%) and congenital hypotrophy of type I muscle fibres.

Groups of type I fibres which are uniformly smaller than type II fibres (ATPase ph 4.3) 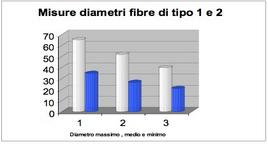 We advise you to consult the neuromuscular pathology laboratory at Federico II University in Naples.