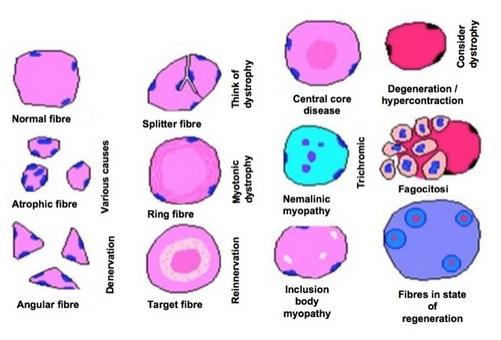 Enervation leads to a particular type of atrophy, called pointed or angular (angular atrophy). In transverse section, the atrophic myofibres present in various bundles appear small and spiky with rounded corners (angular myofibres), which is because fibres near the atrophic ones become hypertrophic and so compress them. 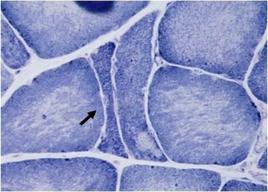 Progression of preceding lesion whereby the number of atrophic angular myofibres increases and they tend to form small clusters. 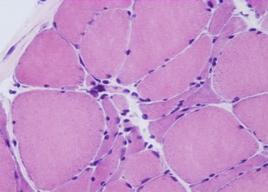 Denervated myofibres (A-C) can be reinnervated (D) by collateral nerves thus the fibres acquire the characteristics of the new motor unit (D). 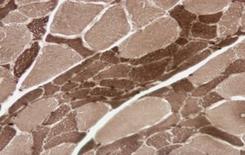 Many angular atrophic fibres can be seen as well as different ATPase at PH 9.4 fibre type grouping

If a denervated fibre is not reinnervated, atrophy continues with loss of myofibrils so that only the myonuclei remain in the sarcolemma.

This is the last stage in chronic denervation. 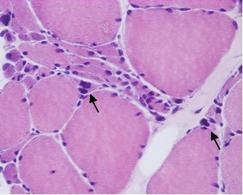 When all the myofibres, or at least the majority, are enervated at the same time it gives rise to widespread, simultaneous atrophy, so the fibres do not assume their characteristic angular form but appear uniform and rounded in transverse section. In chronic states it is possible to find target fibres. 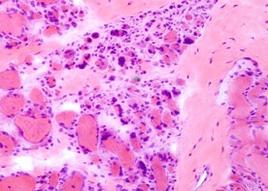 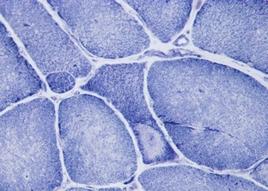 A target fibre can be seen in the centre of the picture. NADH histoenzymatic stain

Vacuoles and aggregates of substances can be seen in many muscle pathologies. Vacuoles may contain lipids, glycogen or the products of degradation. Accumulation of abnormal mitochondria can be seen with Gomori’s trichrome. 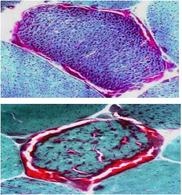 Examples of RRFs. These fibres look ragged and are characterised by deposits of red-coloured material. The stain of choice for observation of these fibres is Engel's trichrome

RRFs are typical of mitochondrial myopathies and are often associated with “Ragged Blue Fibers” which can be seen with SDH and with COX negative fibres
SDH and COX are both purely mitochondrial histoenzymatic stains.

RRFs and RBFs will be negative to the cytochrome oxidase stain (COX) when the abnormal proliferation of the mitochondria is associated with malfunctioning of these organelles.

Myopathy with enzymatic hole in the middle

This type presents with areas where enzyme activity is absent and are typical of Central Core Disease. 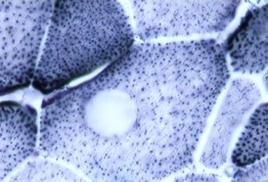 This is a normal way for muscle fibres to divide but it can also occur in muscle pathologies like muscular dystrophy where the division is incomplete, along only part of the length of the fibre. Splitting is a process of regeneration and differentiation starting from a single fibre but it can also be a process of subdivision of hypertrophic myofibres. 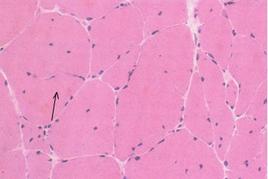 The nuclei in a myofibre are normally located sub-sarcolemma. Migration towards the centre is a non-specific response.
Internal nuclei can be observed in myotonia and muscular dystrophy. 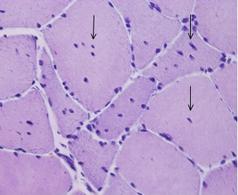 In figure 2: Serious increase in endomysial connective tissue in a case of muscular dystrophy (asterisk). H.E.stain 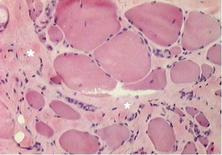 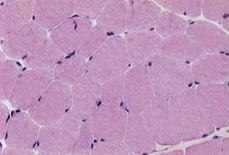 Necrosis of a muscle usually occurs as partial or segmental necrosis and only involves the sarcoplasm. Necrosis involving the sarcolemma as well is less common but it spreads to many fibres (total necrosis).

When the muscle fibre is destroyed, certain enzymes are released which are traceable in the blood:

This is a process of coagulation necrosis involving the sarcoplasm but not the sarcolemma so regeneration is possible.
There are different degrees of this type of necrosis:

Skeletal muscle generally has good regenerative capacity though there are a few exceptions. These regenerative capacities, however, can only work and the muscle be properly restored if the endomysial stroma and the basal lamina are intact.
Regeneration occurs in one of two possible ways depending on whether the sarcolemma is affected or not.

After a few hours the sarcolemma nuclei start to multiply where the stumps are and appear surrounded by newly-formed sarcoplasma which emerges from each stump like a club-shaped bud. These grow into the young connective tissue which has continually filled the solution. 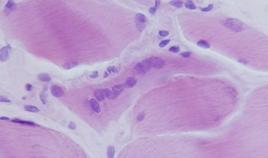 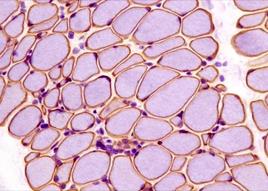