Many different types of both qualitative and quantitative analyses can be carried out quickly and reliably in this way.

Instrumental chemical analysis is based on the use of machines which are powered by electricity and therefore this branch of Analytical Chemistry is fairly “young”.

Analytical Chemistry made a great leap forwards once the analytical instruments briefly described below become available.

The sophisticated analytical techniques available today are the result of a long evolution of scientific and technological instruments:

In instrumental chemical analysis, the response given by the instrument often needs to be converted into an analytical result. One of the most frequently used methods is that of the operating line, a graph which is mapped out experimentally for a specific analyte before beginning real analysis of the sample.

The line produced in response to the signal, which shows a particular chemical parameter (concentration, quantity of material, etc.), guarantees that the analysis can be carried out within a certain interval, which may be bigger or smaller depending on the analyte and the instrument used.

An analytical instrument is something that reacts to a particular stimulus at entry to produce a response, which is usually the measure of some physical size (see right).

If we imagine that x is the concentration of the analyte and y the response from the instrument, which depends on the way it functions, it is possible to identify the relation y=f(x) for any analytical procedure. This firmly links the two values and the graphic representation of this equation is called an operating curve.

To make things easier, we usually work so that the calibration curve is reduced to a straight line, expressed in an equation like y=b1x + b0 where:

To work out this relationship and so trace the operating line which will later enable us to determine the quantity of analyte, we use one or more standards (at a known concentration x) taking the y value from the instrument and mapping the points on the graph. 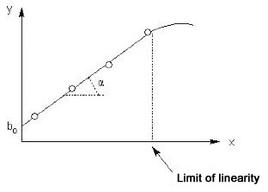 These are solutions at various concentrations which are used to construct the operating line. They take standard solutions as their starting point, and then they are diluted as necessary, being careful not to make any significant mistakes during their preparation.

Since we know that random errors make plotting of the graph more difficult, we use more than one operating standard (not less than three). A certain parameter of these standards is then measured using the chosen machine, which produces corresponding analytical signals. These two sets of values are then plotted on a graph and we see that they form a line which would be straight were it not for random error.

The operating line is traced using regression i.e. using maths to calculate the most statistically probable relationship of dependancy, the one closest to the points produced through experiment.

After constructing the operating line we can then analyse the sample making sure operating conditions are the same. The signal produced (the y values) is used in the operating line to work out the corresponding x value, i.e. the unknown concentration of the sample. In this way the answer given by the instrument is transformed into the analytical data we were looking for.

A sample normally comprises an assortment of substances. The substance we are going to dose is called the analyte, whereas the others constitute the matrix, made up of solvent and possible interferents (additives, pH regulators, etc.) which have an effect on the machine signal. The matrix can thus produce anomalies, usually referred to as matrix effect, because the effect the interference has on the machine signal are added to that of the analyte and so the final result is misleading. This is why we talk about measuring the standard “blank” first, i.e. only the matrix, and then the measuring instrument is put back to zero. In this way, measurements made on the standard and plotted on the graph to construct the operating line are not affected by the matrix effect and so the results we get are more accurate.

Imagine we want to determine the concentration of sucrose in a potato sample. A literature search informed us that the concentration of analyte is 4000 mg/kg (Rocculi et al.). Effects of the application of anti-browning substances on the metabolic activity and sugar composition of fresh-cut potatoes, Postharvest Biology and Technology 43 (2007) 151-157). Given that the sample has been diluted 10 times, we can decide to plot a calibration curve with the following points: 300 ppm; 400 ppm, 500 ppm (parent solutions are prepared diluted with sucrose).

If we analyse the parent solutions using an instrument (at least three points for every parent solution and the average is then taken) we get the following results.

Given that the sample was diluted ten times, the concentration of sucrose in the potatoes is 3368.3 ppm or 0.34g for 100g of fresh product.

Experimental point and plotting of the calibration line using Excel