Vincenzo Fogliano » 7.Protein properties and their role in foods 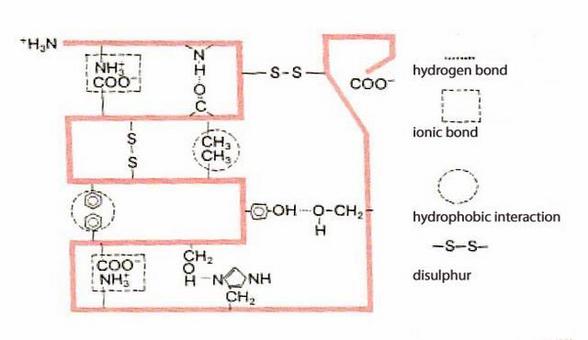 Protein folding occurs during its synthesis and is a spontaneous process guided by the minimum free energy concept.
Denaturation is exactly the opposite process.
The tertiary structure is altered and eventually also he secondary structure is destroyed.
The primary structure is not modified (unless proteases are active).
Denaturation happens when the protein is outside the range of its native condition (and it is reversible at some extent):

Protein nutritional quality depends on digestibility and amino acid content.
The main essential AA is lysine (Lys).
and sulphur containing AA (Cys and Met).
Digestibility depends on the susceptibility to human proteases and to the stability of the gastrointestinal environment (acidic pH).

Which is the metabolic fate of dietary proteins?
Proteases firstly cleave proteins into oligopeptides and then to small di and tri peptides that can be absorbed by intestinal cells and subsequently hydrolysed to single amino acids.
Proteases work better on denatured proteins!
Some exceptions: prions and mother antibodies.

Single AA can be used to syntetize new proteins or (if in excess) used as carbohydrates to produce energy.

In the latter case they must be deammidated producing ammonia that must be eliminated through the urea cycle.

Function of proteins in food preparations

The isoelectric point of a protein is the pH value where the protein has no charge (same amount of positive and negative charge).

At this pH the interactions between proteins are maximised so they can aggregate.

In fact no charge implies no repulsions among particles having the same charge.

The macroscopic phenomenon is a an intermolecular aggregation (protein aggregation).

The driving force behind this phenomenon is the same as that of protein folding: the hydrophobic regions interact with each other to avoid contact with water.

In protein folding the interactions are inside the same polypeptides where as here they occurr between different polypeptides.

Interaction between proteins: effect on foods

During the following processess, it is protein denaturation which is mainly responsible for the organoleptic modifications: boiling, roasting, extrusion, marinade.