The main difference between the dynamics of a stellar system (e.g. globular clusters and galaxies) and that of a gas (e.g. molecules in a box) resides in the nature of the forces that the particles exchange. Gas molecules move at a nearly constant velocity until they “collide” one with another. When that happens, they experience short-lived, impulsive electromagnetic forces which cancel off on average but at short distances. Stars, instead, experience gravitational forces which scale with the inverse square of the radial distance,

exactly as the electromagnetic forces do, but do not cancel off at large enough distances and sum up at all scales of the dynamical system. From this point of view, the dynamics of stellar systems can be considered “global”, differently from that of the gas molecules which is more “local”. Since stellar systems are formed by

particles, even in the simplest approach (classical mechanics applied to an isolated ensemble of mass particles with known initial conditions) the system of individual motion equations:

is far too large to be solvable. Here it comes the analogy between gaseous and stellar systems. Both are idealized as ensembles of N identical (undistinguishable) particles of mass m and must be studied by the statistical mechanics.

Let’s consider a galaxy of size R with N identical stars of mass m . Because of the long range of gravity, each star may be thought to move under the effect of a smooth (coarse) potential generated by the other

stars, provided that the effects produced by the nearest stars (also called slow “relaxation”) are negligible. The question then is: how far is the coarse grain potential from the fine grain one? The answer requires the evaluation of the importance of the encounters. Let’s calculate, to start with, the time

between two direct collisions. The geometrical cross-section of a particle with radius

; the corresponding mean free path is

with the number density of particles

The characteristic time scale between two successive direct collisions of a particle is then:

where the crossing time (

for galaxies). In conclusion, direct collisions are extremely rare and have no effect in galaxy dynamics. [Repeat the calculations for the atmospheric gas, where the above treatment is more meaningful.]

. Our purpose is to compute the time needed by the star to have its kinetic energy significantly altered by the interaction with all the other stars (i.e.

). The problem can be seen as the sum of many two-body encounters with the geometry as in the figure. A test “fixed” star (blue) is approached, with an impact parameter

by a field star moving along a straight trajectory with velocity

along the unperturbed path is the impact parameter. Under the assumption that the interaction is weak, only the tangential component of the force affects the trajectory of the approaching star. 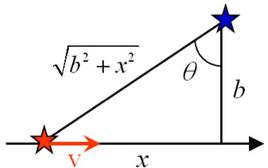 As we are considering weak interactions only, the deflection from a single encounter is small, and the only component of the force that affects the trajectory of the field star is:

Note that the variation of the tangential component of the velocity of the field star can be re-written as:

, where the first term is the force at the minimum approaching distance (i.e. corresponding to the impact parameter

) and the second term is the time at the maximum approach.

By symmetry, all deviations,

are randomly distributed around

with zero mean, but their squared values,

have non zero mean. These latter measure the random change of the perpendicular velocity component of the star per single encounter. We need to evaluate the total amount of the random variations after all the encounters (at all the possible impact parameters). If we assume stars to be uniformly distributed in the volume around the trajectory of the field star (see figure), then the number of stars having an impact parameter between

The square variation per impact parameter between

and per galaxy crossing is obtained summing for all the encounters:

The star travels through the system of N stars uniformly distributed in a radius R from its trajectory.

are dubbed “close”. They have time scales which can be computed by the formula for the direct encounters, replacing

? The average separation between particles in the system is:

as, by the Virial Theorem:

We can now calculate the total amount of the random changes of the velocity along the direction perpendicular to the star motion:

where we have indicated by:

We can re-write the above equation by considering that:

, from which we get:

which represents the total variation for a single non-traumatic crossing through the galaxy.

represents the number of crossings need to reach the wanted condition

Then the number of encounters needed to produce a significant change in the star velocity is given by the relation:

crossings of the galaxy:

is the time of a single crossing of the stellar system.

For instance, it is clear that, at the galaxy formation, the “particles” considered in our two-body model could have been much more massive (clusters of protostars?) and thus much less numerous.

Evaluate the consequences of that in terms of relaxation time and see whether this could help us in solving the dilemma of how a collisionless system could evolve into a symmetric structure.

The constituent particles of these systems move under the influence of the mean potential generated by all the other particles and encounters are unimportant.

Let’s use some typical number for stellar systems to calculate the typical relaxation time by the formula:

As a conclusion, the fact that the time needed for a stellar system to substantial modify the motions of their constituting stars is larger than the time of the Universe tells that the systems are collisionless [how can it be if galaxies appear to be very symmetric, that is relaxed!].

It seems worth to note that the above calculations are not only rough but also related to the current characteristics of the stellar systems considered.

. If collisions are negligible (collisionless system), a complete description of its dynamical status is, at any time, specified in the six-dimensional phase space

is the distribution function (DF) , i.e. a number density in the phase space. [Are there other phase spaces?] We would like to derive the DF at any time, i.e.

and the corresponding flow velocity is:

is the smooth potential.

Lacking collisions, stars do not jump out of their initial volume, thus an equation of continuity for the density of stars

holds, which can be written as:

which is equivalent to the ordinary fluid flow of density

From the figure we see that:

which is the Collisionless Boltzmann Equation (CBE). 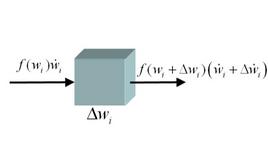 the flow of stellar phase points through phase space is incompressible and the density of points at any phase space position stays always the same.

The complete determination of the DF is practically impossible. Therefore, the comparison of models against observations usually relies on the moments of the Collisionless Boltzmann Equation (CBE). For instance, by integrating the DF:

over all the velocities (0-th order moment), we get the number density of stars:

The 1-st moment or mean velocity is then defined by:

where the integrals are calculated in the range (-∞,+∞) and the repeated indexes are summed.

The first term of the equation is:

The second term can be integrated by parts:

vanishes at infinity by definition. From Eq. (3) we finally obtain the Continuity Equation:

which tells us that, in any elementary cell of the physical space, the number of particles varies by adding those which enter the cell and by subtracting those which leave it in the time unit. [Is this condition verified for any physical system?]

and integrate over all the velocities again:

The second term is integrated by parts:

by definition of generalized coordinates. Thus we obtain:

If we now multiply the continuity equation (5) by

and subtract from the equation (7), we obtain:

and the equation (7) can be re-written as:

we obtain the Jeans Equations:

We rewrite the Jeans Equations as:

is the Eulerian derivative of 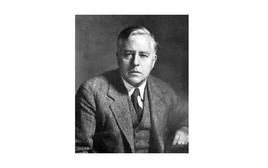 is a symmetric tensor [why?]; hence it is always possible to identify a reference system within which the tensor is diagonal.

In this case the trace of the tensor:

defines the semi-axes of the dispersion ellipsoid.

The figure at the RHS pictures schematically the velocity ellipsoid. In the most general case the latter is fully anisotropic:

For a symmetrized velocity ellipsoid (

is the (local) mean streaming motion, and

is the dispersion of the velocity around the mean (see, e.g., the analogy with the Gaussian distribution). 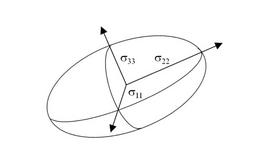 is by definition the number density of the dynamical tracer, and

is the total potential of the overall system which must obey the Poisson’s equation. [Try your best to understand this crucial point.]

Let’s now write the hydrodynamical Euler Equation for a perfect (incompressible as ours) fluid:

are the density and pressure of the gas respectively, and

is equivalent to a pressure term; but, at variance with the perfect fluid, this term can be fully anisotropic (i.e.

In general, Jeans equations cannot be unambiguously solved as, for a stellar system, there exists no analog to the equation of state

applying to a perfect gases. In order to overcome the problem, it is often necessary to make assumptions on

We can now write Jeans Equations in some standard coordinate systems that can be useful in presence of symmetries of the particle systems under study. Let’s start with the cylindrical coordinates

. For simplicity, we assume that the system under study is in a steady state and axisymmetric so all derivatives with respect to

vanish. With these assumptions, the CBE in cylindrical coordinates becomes:

We multiply this equation by

, integrate over the momenta

and then express the momenta in terms of velocities. Thus we obtain:

These equations constitute three constraints on the six second-order velocity moments, provided that density and confining potential are known.

Using the same approach as for the cylindrical case, we now adopt the spherical coordinate system

In this system the CBE writes as:

Under spherical symmetry we also have that

. If we assume in addition that the system has

(i.e. that it does neither expand nor precess) and that it is stationary (

), the spherical Jeans equation is obtained by multiplying Eq. (11) by

and integrating over all the velocities:

Here we can define the anisotropy parameter:

Jeans Equations and the mass distribution

Equation (13) can be easily connected to the mass distribution of the (spherical) stellar system, if we observe that:

the circular velocity and the

the mass within a sphere of radius