Images of spiral galaxies look much more complex and patchy than early-type galaxies. There the surface brightness does not fade smoothly and monotonically from a bright center outwards, as in E types; the spiral arms stand out prominently with the bright patches, where gas is hot and stars are young, and with the intricate labyrinth of the dust filaments and clouds.

Face-on late type spirals do not even show the disk underlying the spiral pattern (which is instead quite apparent in edge-on systems). Under these conditions it is hard to imagine that these galaxies may have a common photometric behavior. But it is not so: as ellipticals do, spirals can be categorized into very few classes according to the way the surface brightness varies with radius. 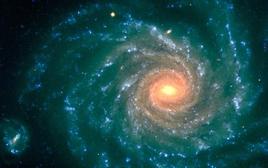 There are though some important differences with ellipticals.

The first is that spiral galaxies, as already Hubble pointed out, are two component systems: they have a central bulge and a disk.

Moreover, due to the mixture of cold (old) with hot (young) components, the parameters and even the trend of the light profiles may depend significantly on color.

A third difference is in the amount of internal extinction, which makes spatial deprojections quite hard if not impossible for quasi edge-on spirals. 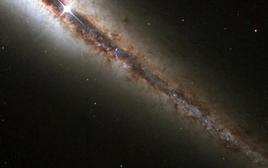 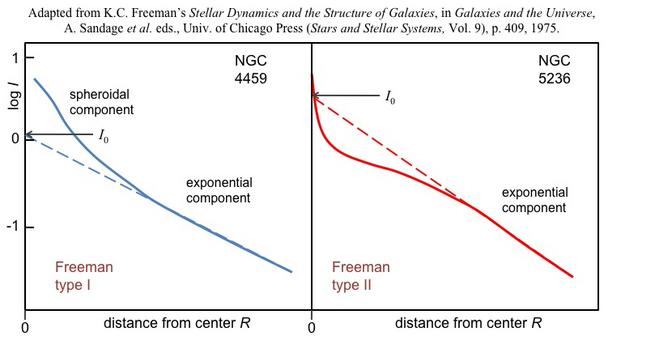 Major axis light profiles of spirals according to Freeman's classification into the types I and II.

The breakthrough in the field came again with the 1959 paper by Gérard de Vaucouleurs in the Handbuck der Physik. There, he showed that the light profiles of spirals can be modeled with the sum of two photometric [does it mean that they are also physical?] components: an elliptical-like bulge, following a

law, and an exponential disk, so called because the trend of the surface brightness versus radius is:

are a scale lengths.

Note the above formula is identical to Sersic’s with 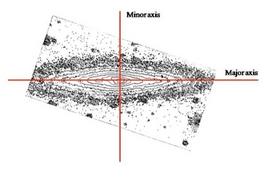 More recently two disk components have been recognized, a “thin” one, signed by the layer of neutral hydrogen, and a “thick” one, the nature of which is unclear. It could be the collection of accreted fragments or just an old disk popped up by interactions. Of course spiral galaxies, as well as all other galaxies, possess another important component, the “dark halo”, which is however not relevant photometry-wise. The luminosity integrated with the radius

[What is the relation between h and the effective radius?] At RHS the major axis light profiles of NGC 1433 in three color bands, and the trends of the corresponding two color indexes. 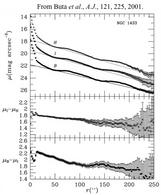 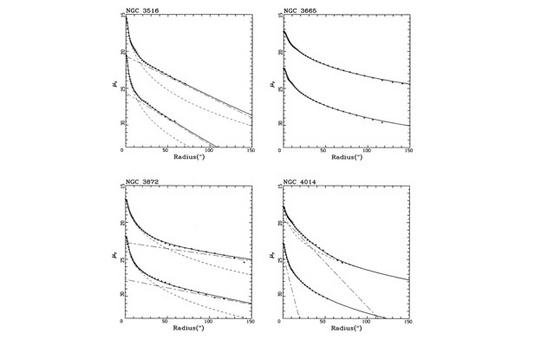 Decomposition of the major axis light profiles of spiral galaxies into the exponential (disk) and R1/4 (bulge) components after Kent (Ap.J.S.S., 59, 115, 1985). You may note the different relative importance of the two components.

How do you disentangle the disk component from the bulge? A better posed question is: how do you fit the major axis light profile of a spiral with the composite formula (with two free parameters):

or any other combination of laws (e.g. Sersic with exponential)? The answer is by minimizing the

is the local error, in an iterative process starting with a reasonable guess of the input parameters (fit of just the bulge with the de Vaucouleurs formula and of the outer profile with an exponential).

At RHS the GALFIT decomposition of NGC 221 (M32). Top: (a) original image, (b) and (c) residuals. Bottom: observed light profile, components, their sum, and geometrical parameters. 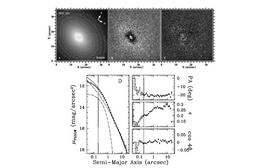 One may similarly decompose a complete image adding the information on the geometry of the isophotes (centers, orientations, and flattening).

Public domain software, such as GALFIT (cf. Peng et al., Detailed structural decomposition of galaxy images, A.J., 124, 266, 2002), may help us, provided these tools are used wisely. Computer programs provides always an answer. You must check that it is makes sense! How? By making experiments with simple cases with known answers, such as toy models.

Vertical structure of the disks

In a simplified model view, elliptical galaxies may be thought as spheroids seen at an inclination (angle between the line-of-sight and the symmetry axis of the galaxy) that remains usually undetermined for the lack of information on the intrinsic flattening of the system. This is not the case for spirals, where the dust lane on the principal plane allows us to declare when the system is edge-on. In these cases we may study the photometric vertical structure of disks. In 1981, using a self-gravitating isothermal sheet description for the vertical distribution (of matter) in exponential disks, Piet van der Kruit and Searle found that the 3-D light distribution [at M/L = const.; why?] could be described by the following expression:

later modified into the parametric family:

by dropping the isothermal assumption. The parameter

for an exponential function) has been measured to be:

is constant with radius at least in the optical and IR and for late type spirals. 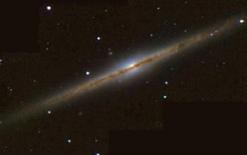 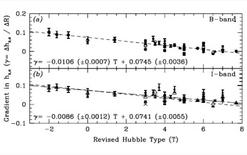 Disk scale height gradients as a function of the revised Hubble type from de Grijs and Peletier (AA, 320, L21, 1997). 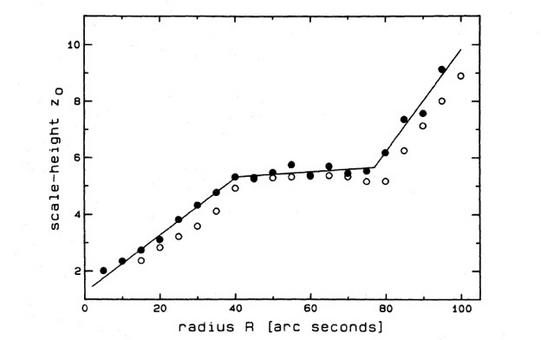 Recently it has been realized how heavily selection effects have biased our discovery of galaxies. This bias, which will be clear later, has possibly induced the two following believes.

In the 1960’s and 1970’s two very popular laws with strong impact on this matter captured the attention of the community. They are related to the (extrapolated) peak brightness

of both ellipticals and spirals, in both cases apparently independent of

and confined within very narrow Gaussians:

is the value that the extrapolated bright peak of the disk,

, would have if the galaxy would be seen face-on. Assuming the galaxy to be a transparent spheroid, the correction is just the ratio

between the apparent major and minor axes of the isophotes [Are they ellipses? Are they independent of R?]. Thus:

of the object under study. 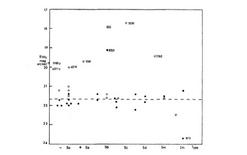 Freeman's (1970) law: constancy of the peak brightness with Hubble type. 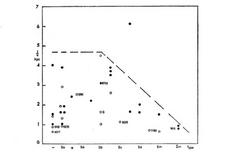 Trend with the Hubble type of the disk scale length after Freeman (1970).

In his 1976 letter to Nature on the Visibility of galaxies, Mike Disney disputed the above laws, showing that they might result from selection effects discriminating low surface brightness (LSB) galaxies. And these latter began to be seen in galaxy surveys. In the 1980’s, the Virgo Cluster photographic survey of Sandage et al. provided the basis to apply a photographic technique that allowed the serendipitous discovery of Malin 1, a giant LSB disk galaxy beyond the Local Supercluster (at

To-day extensive surveys have found many LSB galaxies; most of them are late-type spirals and often very gas rich; some are early spirals or dwarf ellipticals.

Most LSB galaxies are fit well by an exponential radial profile:

A few have even prominent bulges, usually well fit by a

law. This question will be taken back in the section on Luminosity Functions.

Note, in the figure at RHS, the excess of low surface brightness (LSB) galaxies at the left of the diagram. 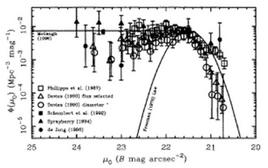 The prototype of LSB galaxies 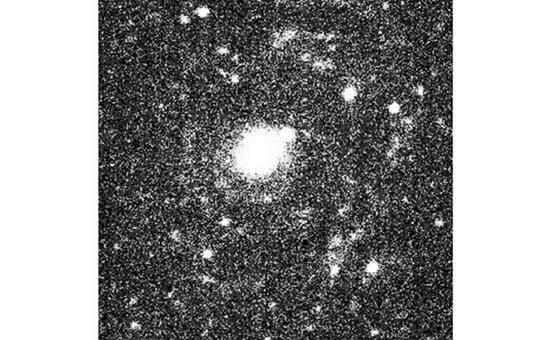 The giant LSB galaxy Malin 1, barely visible but for the bright center. Credit: The Encyclopedia of Science on the Web.

Colors and color gradients for disks

Spiral galaxies are bluer than ellipticals due to the presence of bright young stars (which can be very blue). Old stars are red [why?]. The color index

with increasing Hubble type. From a SDSS large sample we learn that almost all but the smallest galaxies show negative disk color gradients:

In dwarf galaxies the gradient is instead positive: they become redder in the outer parts. The fact is interesting in view of the different histories of these objects with respect to the brighter galaxies. It has been found recently that most (90%) of the disk are broken exponentials, with truncated (Type II) and anti-truncated (Type III) light profiles (these “types” have nothing to do with Freeman’s). Colors have a minimum at truncation in Type II, and a plateau in Type III. However, the mass profiles calculated using colors resemble those of the pure exponential (Type I) galaxies for the truncated profiles, suggesting that the origin of the break is likely due to a radial change in stellar population. 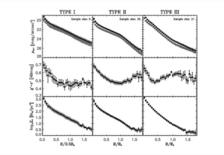 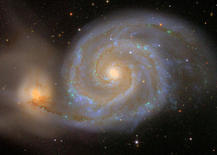 Colors and color gradients of bulges

According to Balcells and Peletier (1993), colors of bulges are predominantly bluer than those of ellipticals (independently of the differences in total luminosity). The result indicates that bulges are younger and/or more metal-poor than elliptical galaxies. Most bulges do not reach solar metallicities. Bulges show predominantly negative color gradients (bluer outward) that increase with bulge luminosity. The similarity with ellipticals suggests that the formation of the disk did not affect the stellar populations of the bulge in a major way.

The figure shows the colors of bulges versus the total magnitudes of the bulges themselves and of the entire galaxy, for objects not affected by dust reddening. 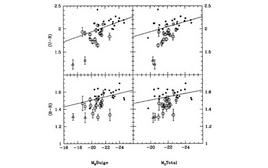 A recent study based on a large SDSS sample (Oohama et al., 2009) shows that bulge properties change systematically along the Hubble sequence from early to late types; the size becomes somewhat smaller, while the surface brightness and the luminosity get fainter. In contrast, disks remain similar irrespective of the morphology from S0 to Sc (as Freemam claimed). Then the systematic change of the bulge to disk ratio B/D is not due to the disk, but rather to the bulge. It is also argued that bulges do not form a unique sequence with ellipticals. The figure shows the correlation between effective radius and effective surface brightness for the bulges of a large sample of S0s and spirals. Dashed lines mark the loci of equal total luminosity. The solid line holds for ellipticals. 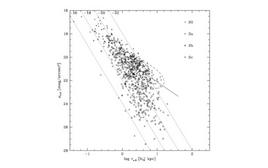