What is a code nowadays?

We can define it as a collection of juridical materials, which are brand new, complete, exhaustive, systematic, coherent and unify law and its subject (Man), cancelling any previous law. 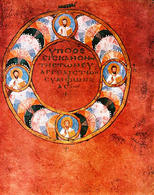 The code pattern appeared in the third century A.D. alongside an editorial revolution: where sheets of more resistant parchment were sown together creating a book/code, gradually substituting the delicate papyrus. Adapt to be used for the collection of juridical materials, which were transportable to be quoted in court.
The word codex in the ancient world would become similar to what we call today a code. At the same time there was also a soft cultural revolution, due to: the change of role of the jurists; the oriental custom to quote from written pages in court; the Christian preaching, which exalted
the written Word as God’s will.

In Roman law not all were technically codes. We can find occasionally ‘consolidazioni’ (see next slide) and codifications. 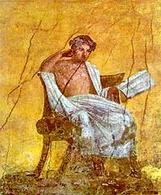 Menander from Pompeii. (Image supplied by the author)

The consolidations is a definition given in the 1930s by an Italian scholar (M.Viora) to indicate collections of juridical materials, which are classified as follows: lacking an autonomous and systematic project by legislators which in time have settled in a untidy manner. The Consolidations in Roman law that we can consider are: XII Tables; perpetual Edict; Gregorian and Hermogenian Codes; leges Romana Wisigothorum; and partially the Theodosian code. 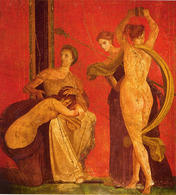 A codification is a complete project by a public power which has decided to reorganise its laws in an entire juridical system, written and published. This is a modern concept, which is not adapt to explain ancient realities, unless we put emphasis on the projectual design (Pompey, Caesar, Theodosius, Justinian).
Usually a code derives from a new law, whereas the consolidation uses the framework of already established laws. The consolidation in history often precedes the codification or the code, due to the fact that it tries to create order in chaos. 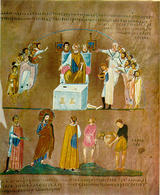 Codex From Rossano (Southern Italy). (Image supplied by the author)

III.1 – The first appearance regarding mores: the XII tabulae

These three modern categories (codes, consolidations, codifications) during ancient Rome intermingled: even if the XII Tables could certainly be considered as a consolidation (they collect ancient materials, as mores maiorum, and file them); at the same time they could be classified as a codificatory fact, because they come from the Establishment (the decemviri), are written and published, and assure certainty of law. 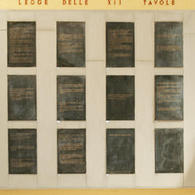 The edict passed by Praetor on assuming his mandate has been defined a code: although its text could change from Praetor to Praetor, and from year to year, it was pinned for public viewing on a notice board in the courts and contained a series of laws, which corresponded to the jurisdictional activity by the Praetor.
However, already in the 1st century B.C., this text began to become stable, being confirmed by each new Praetor (Edictum perpetuum).

Funerary relief with a sella curulis. (Image supplied by the author)

There was a sensitive resistance to the idea of code by the Roman jurists, who as aristocrats, refused the act of power which accompanied a code. This infringed on their sense of freedom in responsa and in thought. Nevertheless we know that the first drafts of codifications were by Pompey, Caesar and Cicero, who denounced the uncertainty of law. 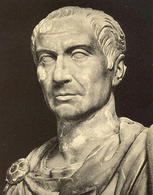 Caesar. (Image supplied by the author)

In 2nd. century A.D., in Marcus Aurelius’ epoch, we know the existence of a book by a jurist, Papirius Iustus (libri XX constitutionum), which gathered together without comment, some imperial laws (just rescripta). It was one of the first steps towards a code (Ius Papirianum).