The performance of a centrifugal pump can be shown graphically introducing a characteristic curve.

In a typical characteristic curve the total dynamic head, efficiency, brake horsepower, and net positive suction head are shown and plotted over the capacity range of the pump.

Figure below shows that the head curve for a radial flow pump is relatively flat and that the head decreases gradually as the flow increases.

The brake horsepower increases gradually over the flow range with the maximum normally at the point of maximum flow. 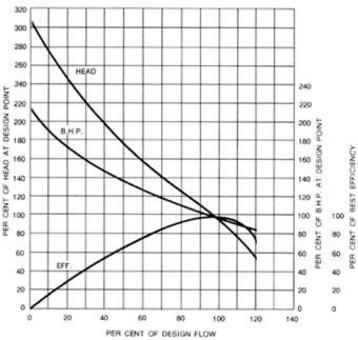 The affinity laws express the mathematical relationship between the several variables involved in pump performance.
They apply to all types of centrifugal and axial flow pumps.

They can be assumed as follows: 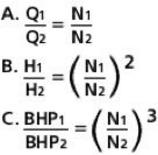 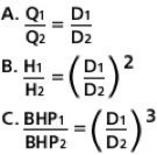 For a specified impeller diameter and speed, a centrifugal pump has a fixed and predictable performance curve.

The point where the pump operates on its curve is dependent upon the characteristics of the system in which it is operating, commonly called the System Head Curve, or the relationship between flow and hydraulic losses in a system.

This representation is in a graphic form and, since friction losses vary as a square of the flow rate, the system curve is parabolic in shape.

By plotting the system head curve and pump curve together, it can be determined: 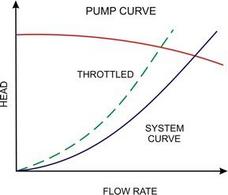 NO STATIC HEAD – ALL FRICTION

If the levels in the suction and discharge are the same, there is no static head and, therefore, the system curve starts at zero flow and zero head and its shape is determined solely from pipeline losses (bends, valves, section restriction, filters, etc…).

The point of operation is at the intersection of the system head curve and the pump curve, while the flow rate may be modulated by using a throttling valve. 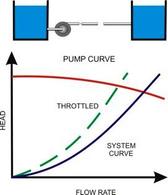 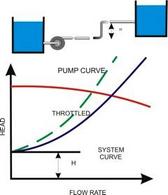 NEGATIVE (GRAVITY) HEAD
In the illustration below, a certain flow rate will occur by gravity head alone. But to obtain higher flows, a pump is required to overcome the pipe friction losses in excess of “H” – the head of the suction above the level of the discharge. In other words, the system curve is plotted exactly as for any other case involving a static head and friction head, except the static head is now negative. The system curve begins at a negative value and shows the limited flow rate obtained by gravity alone. More capacity requires extra work. 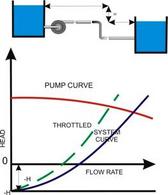 MOSTLY LIFT- LITTLE FRICTION HEAD
The system head curve in the illustration below starts at the static head “H” and zero flow. Since the friction losses are relatively small (possibly due to the large diameter pipe), the system curve is “flat”. In this case. the pump is required to overcome the comparatively large static head before it will deliver any flow at all. 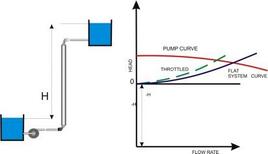 The requirements for the selection of pumps can be summarized infour main points:

To define the process requirements necessary information to choose a pump in verifying the needs of production.

More in detail, process requirements must be defined not only on the basis of present needs, but also on future ones.

For example by calculating how many liters per minute of product are required to empty a tank in a certain time, or those necessary to supply the production lines.

The scope of operation is related to production, while the maximum should be calculated taking into account the possible expansion of production rate or particular operations which need to be carried out quickly.

One must take into account the design pressure of the pump and piping, the product sensitivity to pressure, and energy requirements.

The pipes used in the food industry are generally assembled with welded joints or clamp for quick disassembly, cleaning and connection to the pumps.

The maximum pressure in the pipes used in the food varies from 5 to 300 atm in relation to the type of connection, temperature of the product, installation and maintenance procedure.

The characteristics of the product strongly influence the choice ofpump, and they can be summarized in:

Moreover, known the name of the product, are often known all the remaining features, while in other cases it is necessary to conduct laboratory tests.

The temperature is a very important parameter, since the rheological properties change with it.

Also, some pumps can operate only under certain conditions of temperature, since the thermal expansion of parts could result in damage to the pump due to the tolerances required in moving parts.

The viscosity of the product provides an important indicator of resistance to mass transport.

The size of any solids in the product are needed to understand whether there may be danger of damaging the pump or the product itself, while its chemical activity is important for choosing the material of parts in contact with the product.

The transport of goods or highly acidic solutions may require the use of special steel with low carbon content, such as 316L, or other materials that prevent corrosion.

Sensitivity to shear means to the possibility that the rheology of the product, when subjected to severe stress because of the interaction with the impeller, can vary significantly.

For vapor pressure means the pressure of an area above the liquid in equilibrium conditions.

If the pressure in the pumping system is below the vapor pressure of the liquid, the so-called flashing occurs, or the sudden vaporization of the liquid.

The gas bubbles that form can also collapse when the pressure of the system increases, giving rise to the phenomenon of cavitation that can occur usually downstream of the impeller.

The operational requirements to consider when choosing a pump for aseptic operations can be summarized in the following points: