We define mixing as the reduction of inhomogeneity in order to achieve a desired degree of components (ingredients) combinations at a defined scale.

Failing to produce in the mixing scale-up the required product yield, quality, or physical attributes, would consequently increase the costs of manufacturing significantly, resulting in a marketing delay or even a product suppression in view of the cost and time required to correct the mixing problem.

The inhomogeneity of phase, concentration or temperature, can induce secondary effects, such as mass transfer, unwanted reaction and resulting in changing product properties which are usually the critical objectives.

Incomplete mixing may result in severe scale-up manufacturing problems, from costly layout and equipment corrections in the industrial plant to complete failure of a process.

The costs associated with these problems are far greater than the cost of solving the mixing issues during process development.

The key variables to identify in any mixing problem are the time available to accomplish mixing (the time scale), related to process parameters, and the required scale of homogeneity (the mixing length scale).

Most of the food processes are essentially molecular-level processes, identifying for this reason the scale of mixing required.

Mixing on a larger scale is less influenced by process mechanisms.

Mixing mechanisms can be classified according to 3 main categories depending on the characteristic length.

If we consider the process in a stirred tank volume V, the largest scale of mixing is constituted by the whole reactor.

The mean convective flows are responsible for the mean concentration and residence time distribution (RDT).

Macromixing can be characterized by the circulation time τc, defined as (fig. 1)

where Rc=K1Nd3 , N is the stirring rate, d is the impeller diameter, Rc is the circulation capacity and K1 is a constant depending on the pumping capacity of the impeller. 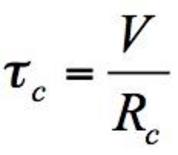 Micromixing
Small scale mixing in liquids is driven by the mechanisms of viscous convection of fluid elements and molecular diffusion.
An important feature of micromixing is the accelerating effect of nonlinear viscous convective deformation on molecular diffusion.
Mesomixing
Mesomixing refers to the coarse scale of turbulent exchange between the fresh feed and its surrounding.

Mixing measurement is the assessment of mixed small volumes which can be taken or sampled.

Sample compositions move from the initial unmixed state to the mixed state, and measurements of mixing must reflect this development.

If the sample is so large that it includes the whole mixture, then the sample composition is at once the mean composition and there remains no mixing to be done.

At the other end of the scale (in theory molecular size), then every sample would contain only one or other of the components in the pure state and different mixing state would not make any difference.

For example, if a mixed product is to contain 2% of component A, the addition of 20 kg of this component to 980 kg of component B, overall will meet this requirement.

But if the final product is to be sold in 2 kg packets, the practical requirement might be that each packet contains 40 g of component A with some specified tolerance, and adequate mixing would have to be provided to achieve this.

This suggests that the deviation of the sample compositions from the mean composition of the overall mixture can act as a measure of the mixing process.

This deviation decreases as mixing progresses.

A satisfactory way of measuring the deviation is to use the statistical term called the standard deviation.

This is the mean of the sum of the squares of the deviations from the mean, and so it gives equal value to negative and positive deviation and increasingly greater weight to larger deviations because of the squaring. It is given by: (fig);

The process of working out the differences can be laborious, and often the standard deviation can be obtained more quickly by making use of the mathematical relationship.

The values of s can be calculated from the measured sample compositions, taking the n samples at some stage of the mixing operation.

It can be convenient to use the variance of the fractional sample compositions from the mean composition s2 rather than s.

In order to achieve a fundamental understanding of the mixing process and its optimization it is necessary to introduce a distinction between “dispersive” and “not dispersive” mixing and to identify the main characteristics of these mechanisms.

In a multiphase system, dispersive mixing involves the reduction in size of a cohesive minor component such as clusters of solid particles or droplets of a liquid.

Distributive mixing is the process of spreading the minor component throughout the matrix in order to obtain a good spatial distribution.

In any mixing device, these two mechanisms may occur simultaneously or stepwise.

In the following figure these two mixing mechanisms are schematically depicted.

The conditions under which dispersive mixing occurs are determined by the balance between the cohesive forces holding agglomerates or droplets together and the disruptive hydrodynamic forces. 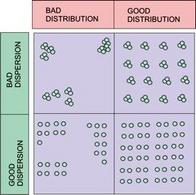 A – Trajectory segregation.
If we consider the Stokes’ law valid (drag coefficient Cd=24/Re) and we consider the projected velocity U of a small particle of diameter μ and density ρp travelling horizontally in a fluid with viscosity m and density ρf, then the limit distance that it can travel is: (fig.1)

Segregation appears as a function of d2.

B – Percolation of fine particles.

The movement of single particles into a mass of particles generates a rearrangement in the packing of the particles.

The gaps created by the movement allow particles from above to move downwards, and particles in some other place to move upwards.

If the powder is composed of particles of different size, the gaps between particles will facilitate small particles to fall down and so there will be a tendency for these particles to move downwards, leading to segregation.

A very small difference in particle size can introduce a significant segregation.

Segregation by percolation of fine particles can occur whenever the mixture is disturbed, during stirring, shaking, vibration or when pouring particles into a heap, causing a rearrangement of particles.

Stirring, shaking and vibration would all be expected to promote mixing in liquids or gases, but cause segregation in free-flowing particle mixtures.

Next Figure shows segregation in the heap formed by pouring a mixture of two sizes of particles.

The shearing caused when a particle mixture is rotated in a drum can also give rise to segregation by percolation. 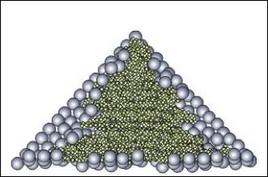 If a mixture of particles of different sizes is vibrated, then the larger particles move upwards.

This can be demonstrated by placing a single large ball at the bottom of a bed of sand (for example, a 25 mm steel ball in a beaker of sand).

On shaking the beaker up and down, the steel ball rises to the surface.