In the previous lecture we have shown that for most clusters we can assume that:

If we make one further assumption, that its distribution is spherically symmetric, Eq.(1) can be written as :

which represents the total gravitating mass in the cluster within a radius r.

X-ray observations of galaxy clusters allow us to measure:

and therefore, from Eq.(4) to obtain an estimate not only of the mass of the intra-cluster gas, but also of the total gravitating mass within the cluster.

Since we can measure the volume density distribution of intra-cluster gas ρICG(r) form X-ray observations, the mass of the gas will simply be given by its integral over the whole cluster volume:

We know that the cluster mass is given mainly by dark matter and by the ICG: Mtot~ MDM+ MICG.
Eqs.(4) and (5) provide us the means to measure both the total mass of the cluster and its gas mass. We can hence also write:

From X-ray observations alone, we can therefore measure not only the mass of the intra-cluster gas which is emitting in X-rays, but also the radial distributions of both the total gravitating mass and the dark matter.

At distances of about 1 Mpc from the cluster centre, typical mass values are:

For approximately isothermal clusters Eq.(4) transforms in the following, much simpler expression for the total cluster mass:

The assumption of spherical symmetry can be relaxed to more realistic ellipsoidal or triaxial shapes, but at the high price of extremely more complicated expressions for the total cluster mass.

One model that has been extensively used to describe the ICG radial distribution is the so called “β-model” (Cavaliere & Fusco-Femiano 1976). In this model, both the galaxies and the intra-cluster gas are assumed to be isothermal, bound to the cluster, and in equilibrium.
The galaxies are assumed to have an isotropic velocity dispersion (σr), and hence their spatial density is given by:
(7)

The same can be written for the gas distribution:
(8)

is the ratio of the galaxy-to-gas velocity dispersion:

If the galaxy distribution can be described by the King approximation to a self-gravitating isothermal sphere: 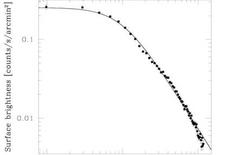 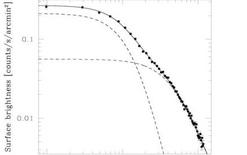 More complicated models, such as a double β-model (given by the sum of two single β-models) often provide a more accurate description of the data.

Spectroscopy of the intra-cluster gas provides information on its temperature and chemical composition (see discussion on Coronal approximation in Lecture 5).

1. A continuum component
produced by thermal bremsstrahlung, the predominant X-ray emission process in clusters at

and an atomic density of n=10-3 cm-3
2. Line emission
produced by several processes, such as: collisional excitation of valence or inner shell electrons, radiative and dielectronic recombination, inner shell collisional ionization, and radiative cascades following any of these processes. In addition to the 7 keV Fe line complex, X-ray spectrum of solar abundance plasma also contain lines form C, N, O, Ne, Mg, Si, S, Ar, Ca, and L lines of Fe and Ni.
All of these emission processes (continuum and line emission) give emissivities that increase in proportion with the ion and electron densities, and otherwise depend only on the temperature 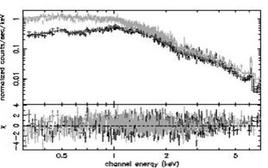 XMM spectrum of the galaxy cluster Abell 851. Grey and black points show the spectra for the different detectors on board of the satellite.

Until the last years of the past century all clusters in the X-rays looked regular and spherical.

In 1999, the advent of the Chandra and XMM-Newton satellites has shown that most clusters are instead strongly irregular and that violent physical processes are taking place inside these large structures.

The central 100 kpc of most clusters show strong peaks in the surface brightness distribution, which correspond to decrease drops by a factor of three or more in the gas temperatures.
As a results these clusters have cooling times (the time for a sound wave to cross the entire cluster) tcool~108 yrs, and hence shorter than the age of the Universe.

As a consequence, the stronger the X-ray emission from the ICG, the more the gas cools.
Some kind of heating phenomenon has to balance the cooling, which would otherwise cause a catastrophe in the innermost regions of these clusters.

Among the most accredited heating mechanisms that could counterbalance the cooling, are:

Galaxy clusters form via mergers of smaller subunits. Such mergers dissipate a large fraction of the subclusters’ vast kinetic energy through gas dynamic shocks, heating the intra-cluster gas and probably accelerating high energy particles.
Shocks contain information on the velocity and geometry of the merger. They also provide a unique laboratory for studying the intra-cluster plasma, including processes such as thermal conduction.

Three types of phenomena can generate shocks in the ICG.

1. In the cluster central regions, powerful AGNs often blow bubbles in the ICG, which may drive shocks within the central few hundred kpc region. These shocks have M(*) ˜ 1. It is difficult to derive accurate temperature and density profiles for such low-contrast events, so they are poorly suited for using shocks as a diagnostic tool.

2. At very large off-center distances (several Mpc), cosmological simulations predict that intergalactic medium should continue to accrete onto the clusters through a system of shocks that separate the intergalactic medium from the hot, mostly virialized inner regions. The intergalactic medium is much cooler than the ICM, so these accretion (or infall) shocks should be strong, with M ˜ 10 – 100. As such, they are likely to be the sites of effective cosmic ray acceleration, with consequences for the cluster energy budget and the cosmic γ-ray. However, these shocks have never been observed in X-rays or at any other wavelengths, and may not be in the foreseeable future, because they are located in regions with very low X-ray surface brightness.

3. If an infalling subcluster has a deep enough gravitational potential to retain at least some of its gas when it enters the dense, X-ray bright region of the cluster into which it is falling, we may observe spectacular merger shocks. These last discontinuities provide the only way to measure the gas bulk velocities in the sky plane and the gas compression ratio.”

The figures show the best example of shock due to merging ever observed, in which the fast-moving substructure A (the “bullet”) has had a recent merger with a second substructure B. 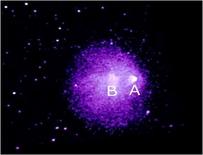 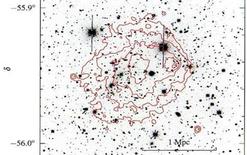 Let us consider a fast moving dense gas cloud, with semi axes a and b, moving from right to left (as show in the figure) within a hot plasma. If the dense gas cloud were at rest relative to the hot gas, the pressures should not show discontinuities. However, a jump is observed on both sides of a dense front. The most natural explanation would be that the cloud moves through the ambient gas and is subject to its ram pressure in addition to thermal pressure.
From our data, we can determine the velocity required to produce the observed additional pressure.
If the velocity of the body exceeds the speed of sound, a bow shock forms at some distance upstream from the body. The gas parameters just inside the bow shock will be denoted with an index 2. The gas parameters inside the body will have index of 0′. Far upstream from the body, the gas is undisturbed and flows freely (“free stream”; region 1). Near the outer edge of the body, the gas decelerates approaching zero velocity (“stagnation point”; region 0). 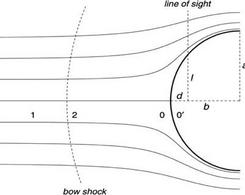 Schematic view of a merging event.

Following Landau and Lifshitz (“Fluid mechanics”, 1959), the ratio of pressures in the free stream and at the stagnation point is a function of the cloud speed v.

where γ=5/3 is the adiabatic index of a monatomic gas.

The above formula is valid if M1≡v/c1>1, and hence if the gas cloud is moving faster than the sound speed of the hotter gas. If this discontinuity is interpreted as a shock front, it is straightforward to derive the expected temperature and density jump, the shock propagation velocity, and the velocity of the gas behind the shock, using the Rankine-Hugoniot shock equations (Landau and Lifshitz , 1959):

If the observed density and temperature discontinuities agree with the above expected values, one can confidently assume that the hypothesis of a dense gas cloud moving at supersonic speed v is a fair one.

Among the first Chandra cluster results was the discovery of “cold fronts” in merging clusters Abell 2142 and Abell 3667, as density discontinuities in the gas distribution across sharp edges.
At the time they were interpreted as shocks fronts. If these features were shocks, the gas on the denser, inside of the density jump would have to be hotter than that observed in the less dense gas outside the edge. These clusters show instead opposite temperature changes, ruling out the shock interpretation.
What are these sharp edges then? One hint was given by the gas pressure profiles across the edges (simply the product of the density and the measured temperatures), which show that there is approximate pressure equilibrium across the density discontinuity, as opposed to a large pressure jump expected in presence of a shock. 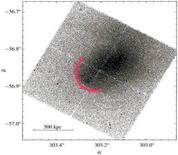 The most accredited model for the origin of cold fronts is that these are post-shock events, originating during a merger observed after the passage of the point of minimum separation, and presently moving apart. The model, initially proposed for Abell 2142, is shown schematically in the figure.
Dense gas clouds are remnants of the cool cores of the two merging sub clusters that have survived shocks and mixing. The preceding stage of the merger is shown in upper panel. In upper panel, shaded circles depict dense cores of the two colliding sub clusters. The less dense outer subcluster gas has been stopped by the collision shock.
Shock fronts 1 and 2 in the central region of top panel have propagated to the cluster outskirts in lower panel, failing to penetrate the dense cores that continue to move through the shocked gas. The dense cores (or, more precisely, regions of the sub clusters where the pressure exceeded that of the shocked gas in front of them, which prevented the shock from penetrating them) continued to move ahead through the shocked gas, pulled along by their host dark matter clumps.