Binary stars are a common configuration in the Universe.

Binary systems where one of the members is a compact stellar remnant (white dwarf, neutron star or Black Hole) can become strong sources of X-ray radiation, when matter lost from one member is accreted on the compact companion.

X-ray binaries are commonly divided into Low and High mass X-ray binaries (LMXB or HMXB) depending on the mass of the donor star (N.B. not of the compact object!). 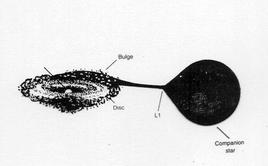 Thus GMWD/rc2=0.02% of rest mass is released in accretion.
Consider that the average efficiency of fusion processes is ~ 0.7%.

The path of a particle orbiting a binary system is influenced by the gravitational potential of the system. 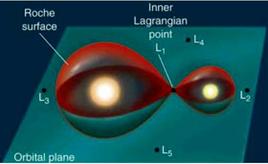 Transfer of mass may occur via: 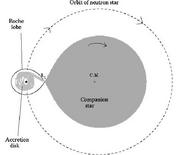 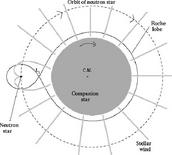 Evolution timescale is approximately the time it takes for the star to radiate the energy produced by H→He thermonuclear reactions:

Thus:
LMXBs are associated with older stellar populations than HMXBs.

In the assumption of spherical accretion it is possible to derive limits on the mass and luminosity of the accreting object considering that radiation pressure cannot exceed gravitational pull. This limit is commonly referred to as “Eddington limit”.
The radiation force on a free electron (the gas can be assumed completely ionized) is:

is the Thomson cross section described in a previous lecture, while the gravitational force:

At equilibrium the two will balance each other yielding:

The upper limit in luminosity, Leddington scales with mass of accreting source:

The inverse argument yields a lower mass limit for a given luminosity. 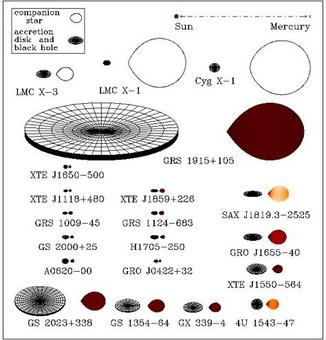 Black hole X-ray binaries in our Galaxy. The figure shows the companion star and the accretion disc (including its inclination) drawn to scale. For a comparison, the Sun - Mercury distance is shown. 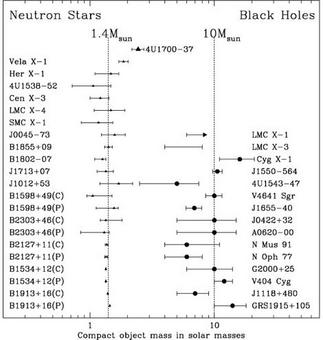 To understand the radiation emitted by an accretion disk we can assume that the disk emits as a Black Body.
We define a Black-body temperature, TBB as the typical temperature of the source if it radiated as black body:

The spectral analysis is complicated by variability, change of the relative normalization of the different componente (the so called high/low states), the presence of different levels of photoelectric absorption etc… 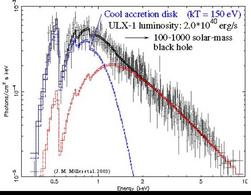 X-ray spectrum of an accreting binary system, with a cold accretion disk component and a hot power-law component due to, i.e. comptonization in a hot corona.

For LX>1039 erg/s we enter the ULX regime, since the Eddington argument implies very large masses of the accreting object. 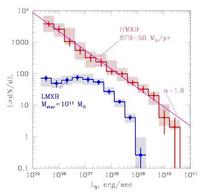 Based on the Eddington limit argument, X-ray binaries with luminosities in excess of ~1039 erg/s are believed to host intermediate mass black holes with masses M~100M⨀. Their existence and origin are however still matter of debate. 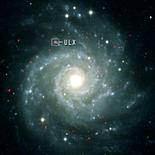 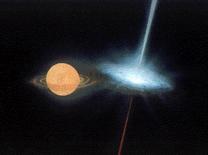 An X-ray binary system with collimated emission along the jet. These configurations can appear as ULXs even if of low mass.