The main processes responsible for the production of high energy radiation are:

Free-Free radiation is produced by the interaction of charged particles. The emission is due to the energy radiated by the acceleration experienced by one of the particles moving in the electric field produced by the other one. For such reason it is also called Bremsstrahlung Radiation (which means ‘braking’ in German).

In Astrophysics the usual treatment considers the problem of unbound interacting charged particles of very different mass, since this is the most common case where an electron interacts with a heavy ion. 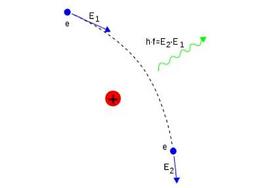 Since the initial and final states of the accelerated particles are unbound states, the result is a continuum emission. 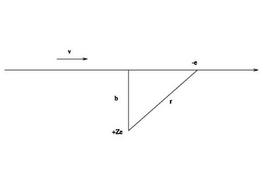 Scheme of the trajectory of a free electron of speed v, passing by a heavy charged ion +Ze with impact parameter b.

In an ionised plasma free-free radiation comes from electrons encountering ions. Encounters between two electrons cannot produce radiation by electric or magnetic dipole processes; they will emit quadrupole radiation for which the power is lower by ~(v/c)2.

An ion of course is also accelerated by the field of a passing electron but its mass mi is much greater than me and so it is the acceleration: thus its radiated power is negligible in comparison to the electrons.

We assume that the electrons trajectory is a straight line which will be true of in a typical astrophysical gas. We neglect the effect of radiation reaction on the orbit, generally a good approximation.

To derive the Bremsstrahlung spectal energy distribution, we start considering the simpler case where the electron is moving non-relativistically. The acceleration is:

To derive the spectrum of the emitted radiation, we take the Fourier transform of this electric field:

The spectrum radiated by a single electron is thus:

This spectrum is flat for v<< ν/b and has a high-energy exponential cutoff for v>> ν/b.

This result is due essentially to the fact that the electron cannot exchange more than its total energy, and thus the radiated spectum must fall to zero rapidly around that energy.

In practice electrons will interact with ions over a broad range of parameters of impact b. Thus the total emission is obtained integrating over all possible impact parameters. 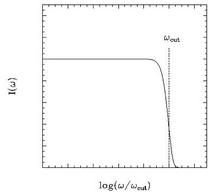 Spectrum produced in the Bremsstrahlung process by a single ion-electron encounter. The spectrum is flat up to a cutoff frequency ωcut=ν/2πb and falls off exponentially at higher frequencies.

There are a few important facts about bremsstrahlung to keep in mind:

Note that absorption in a plasma can alter the spectrum at low frequencies where the material becomes optically thick (see Lecture 2).

Lets assume that electrons all move at speed v, then we can calculate the number of electrons passing through an annulus of thickness db around a single ion per unit time: ne=2πvb db. To get the power radiated per unit volume we need to multiply by the density ni of ions:

where dW/dν is the single encounter spectrum discussed above.

We put all of our ignorance (both the approximations made thus far and additional quantum mechanical factors into the ‘Gaunt factor’ gff(v,ν)~1 in most regimes of interest. See Rybicki-Lightman (p.159-161) a more accurate discussion of this factor.

The minimum impact parameter bmin will be set by one of the two following considerations:

The classical criterion will be important when v≤Ze2/ħ (v/c≤αZ where α=e2/ħc~1/137); this will be true for Bremsstrahlung from a typical HII region (T~104 K).
At the higher velocities found in the intergalactic gas in galaxy clusters (T~108 K), the uncertainty principle determines bmin.

The minimum allowable velocity vmin arises because the electron must have a kinetic energy of at least (1/2) me v2=hν in order to emit a photon of frequency ν.

For a Maxwell-Boltzmann distribution

where we have assumed that the velocities are isotropic. Thus in a plasma at temperature T:

The result of the integration gives the monocromatic emission due to a thermal plasma:

is the Gaunt factor averaged over velocities.

The exponential cutoff is due to the photon energy limit and the exponentially small number of very high energy electrons in a Maxwellian distribution. The T-1/2 arises because the power emitted by a single electron scales as v-1 i.e. T-1/2. Furthermore, since the emission is produced by an ion-electron encounter, the result is proportional to ne ni .

The total power loss to bremsstrahlung can be found by integrating over all frequencies:

Where g is obtained averaging over all frequencies the velocity-averaged Gaunt factor. This factor will be in the range 1.1-1.5 and a good approximation is 1.2 . Note that the total power lost to the electron is now proportional to

, where E is the energy of the electron.

This result holds for non-relativistic Bremsstrahlung, since in the relativistic regime the power becomes proportional to E (see e.g. Longair, vol.1). 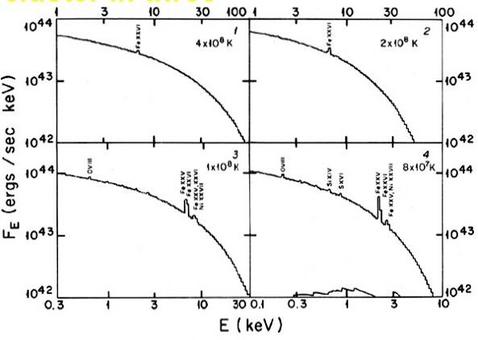 Example of the Bremsstrahlung spectrum produced by the thermal plasma of a galaxy cluster at different temperatures. As the temperature drops the emission lines due to radiative recombination (see next lecture) becomes apparent.